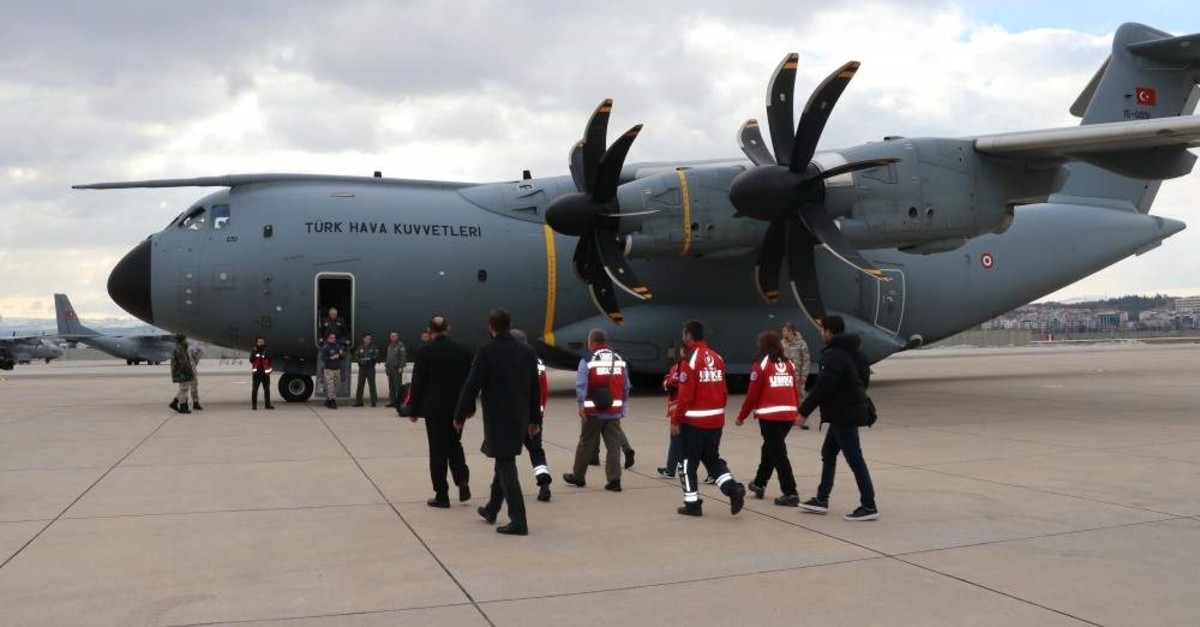 Authorities continue to assure the public all measures are in place amid hoaxes of coronavirus cases in Turkey, while a military cargo plane left for China to evacuate citizens from the virus's epicenter, Wuhan

Panic has spread worldwide as the death toll from the coronavirus outbreak climbs to 213 and countries scramble to take measures to protect their citizens. Turkey so far has been safe from the outbreak, and Health Minister Fahrettin Koca confirmed that there were no cases involving any Turkish citizen or any foreigner visiting Turkey. Koca led a meeting of health authorities Friday after the World Health Organization (WHO) declared the outbreak a global emergency.

The minister said Friday that no cases of the coronavirus have been confirmed in the country, adding, "In the case that the virus is detected, we have sufficient resources to deal with it safely."

Koca added that 11,000 passengers arriving from China have been checked with thermal cameras and that they have not encountered any suspected cases of the coronavirus. He said samples had been analyzed from 68 individuals across several provinces of Turkey, but all of the tests had come back negative for the virus.

A military cargo plane took off Friday from Etimesgut military airfield in the capital Ankara to evacuate Turkish citizens from Wuhan, the epicenter of the outbreak. The plane is set to return home Saturday. The Turkish Cooperation and Coordination Agency (TİKA) also loaded medical equipment into the plane, including 1,000 biohazard suits, 93,500 face masks with protective filters and 1,000 single-use protective clothes, to deliver to China for assistance in fighting the outbreak.

"Turkey will never leave any of its citizens to fend for themselves. We have citizens who live in Wuhan and were not diagnosed with the coronavirus. We cannot leave them there at a time of such an outbreak. The evacuation process took a bit longer, but it eventually started," he said. He said they converted the plane into an ambulance and staffed it with two doctors specialized in infections and other health care personnel, along with protective gear and medical equipment. He added that citizens from countries who are "Turkey's friends and neighbors" are also being evacuated by Turkey, noting that seven Azerbaijanis, seven Georgians and one Albanian national will also be evacuated. "None of those people are diagnosed with the coronavirus, but we have to take every measure and they will be isolated during their trip and quarantined for 14 days after they arrive in Turkey," he said, noting that an unused hospital was exclusively allocated for patients.

The minister said they have adopted strict measures since the outbreak was first reported in China. "We never hesitated to monitor anyone suspected of having contact with anyone coming from China and all test results for the (coronavirus) turned out negative," Koca said. He called upon the public not to fall for "malicious" social media posts claiming that the outbreak had spread to Turkey.

A photo showing an admission document for a young patient with "coronavirus" at an Istanbul hospital made rounds on social media; while a number of Chinese tourists in Istanbul and the central city of Aksaray were hospitalized for possibly having the virus but were later found not have been infected.

On the photo that has gone viral on social media, Koca said a 6-year-old Chinese child was admitted to the hospital but was not diagnosed with the virus as it claimed. He said that the initial results showed the child had symptoms of influenza, but he was quarantined before the actual results were found. He added that the public will be further informed once the definitive results are concluded.

Professor Tufan Tükek, dean of Istanbul University's Faculty of Medicine where the child was admitted, also spoke about the issue Friday. Tükek said the child was admitted Thursday night and upon detecting high fever and fatigue, hospital staff took the necessary measures. "The patient had no breathing problem and healthy lungs and his body temperature dropped, thus, an ultimate coronavirus diagnosis is not likely now. We also sent his test results to a health center in Ankara for a second opinion," Tükek said.

On the document showing that the patient had coronavirus, Tükek said the form was apparently filled in without a definitive diagnosis, and they launched a probe into the people involved in the inaccurate diagnosis as well as those spreading the photo on social media. He said that they quarantined the hospital ward where the patient was treated as a precaution but reopened it after the initial results turned out to be influenza.

Similarly, the emergency room of a hospital in the northern Turkish province of Tokat was quarantined after the admission of a male patient who arrived from Hong Kong Friday. The patient was suffering from breathing problems, but doctors determined it was not a coronavirus infection and ended the quarantine four hours later.

"We have an epidemic disease control center, and our staff there monitors the current situation of the outbreak moment by moment. So far, 9,810 cases were reported in 23 countries, from the United States to France, Australia, Germany and Canada. Bear in mind that 99% of the cases are in China, and all 213 fatalities from the virus were in China. People in the 187 other cases were also treated and discharged from hospitals (in other countries), and the majority of those who died of the virus were people above the age of 65 and with lower immunity," Fahrettin Koca said.

He said Turkey did not wait for a warning from the WHO to take precautionary measures. "We have health care personnel deployed at the airport around the clock and disease control measures are in place for all flights originating from China. We also informed airlines and travel companies about the risks."

"In every province, we have quarantine rooms, isolation stretchers and protective equipment ready for any likely case," he said.

The minister said all health care facilities and personnel in Turkey were informed about what to do in the event of a virus case and that they will inform students about the issue once the school year resumes Monday.

"We monitor anyone who traveled to and from China and with complaints of fever and constant coughing as a precaution even if their case is not related to the coronavirus," he said.

On WHO's global emergency notice, he said this was necessary for countries with insufficient capacity to deal with the coronavirus threat and noted that the WHO did not urge restrictions on travel.

Along with airports, Turkey is also cautious about maritime transportation, and Koca said the country did not receive any passenger ships from any Chinese port but took measures against cargo vessels coming from China. "We have 33 health inspection centers at our ports as a precaution," he said.

Turkish Airlines initially slashed the number of flights between Turkey and China but after WHO's declaration of a global emergency, THY announced Thursday that all flights to and from Beijing, Guangzhou, Shanghai and Xian were suspended until Feb. 9.

China asks for masks from Turkey

The coronavirus outbreak in China has led to a boom in demand for face masks. Turkish mask manufacturers say they have received a demand for nearly 200 million masks "at one party," a huge number compared to Turkey's yearly production of around 150 million. The demand mounted in the past 10 days as the death toll from the virus climbed. China itself is one of the world's largest mask manufacturers but the outbreak put pressure on local manufacturers and forcing the country to turn to exports.

Turkish factories extended working hours to meet the demand. Fatih Arpacı, one of the owners of Ak-Yel Medikal company based in the western city of İzmir, said they were "surprised" upon the high demand. The company, in the business for 17 years, will send the first batch of 250,000 masks to China. Arpacı told Anadolu Agency (AA) that other countries importing masks from China also turned to Turkey for imports. "We speak about a high volume of exports and we have a certain capacity. We work around the clock to meet the demand," he said.

Furkan Başaran, who runs a workplace safety company based in Istanbul, says mask supplies in Turkey "ran out." "Manufacturers give an eight-week deadline for delivery nowadays though they work three shifts and on Sundays," he told AA. Başaran said they were not aware which type of masks work better for protection against the virus. "Masks that Chinese firms want are typically N95 class masks, which have an FFP3 protection level under U.S. and European standards. They are preferred because they provide 50 times more protection in filtering pollutants such as bacteria, viruses, dust, fog and smoke compared with normal masks. These masks are sold at prices between 1.8-3 euros [$1.99-$3.32], depending on their quality standards. Başaran warns that high demand may endanger Turkey in case of infection in the country." "We don't have any supplies now and if the virus spread to Turkey, masks may end up in the black market," he says. He says that along with masks, the demand for protective suits increased. Serdar Serdaroğlu, another company owner, says that they sold 15,000 masks in one week. "Some businesses try to raise the prices but we won't allow it," he said.

The outbreak has fueled the increasing demand for protective face masks, not only in mainland China but also around the world in airports, including Istanbul Airport. More than 10,000 face masks have been sold at Istanbul Airport pharmacies so far, media reports said Thursday. The airport has also been carrying out initial protective measures. For instance, passengers arriving from Chinese cities that haven't yet been locked down due to the outbreak are required to pass in front of thermal cameras which can detect high fever — one of the primary symptoms of the disease. Nurcan Erkul, a pharmacist at Istanbul Airport, said people who live in those countries are accustomed to using face masks, but while they were only buying two to three masks at a time in the past, they are now buying several boxes.