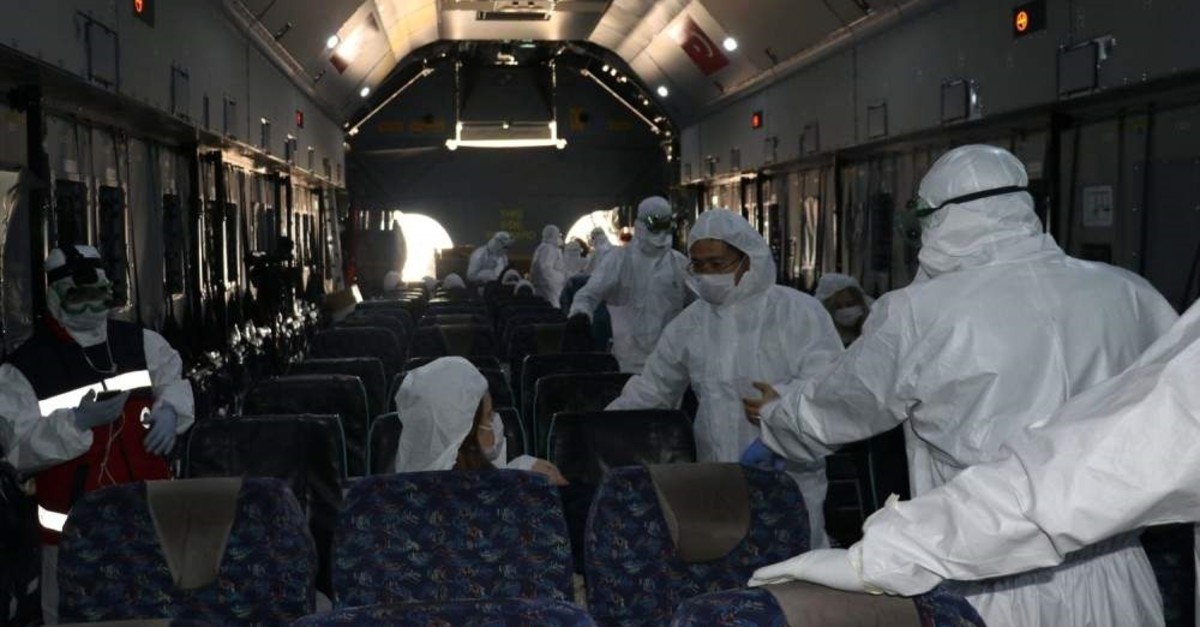 Turkey wrapped up an evacuation operation from China's Wuhan on Saturday amid the coronavirus outbreak there and vowed to stay vigilant against any potential cases in the country. Authorities reassured the public as the death toll mounted globally and Turkey ramped up aid to China in the fight against the disease.

A military cargo airplane carrying 42 people, including 32 Turks and 10 people from Azerbaijan, Albania and Georgia, departed from Wuhan, which was at the epicenter of the outbreak on Saturday, and arrived later that day to the capital Ankara.

Under tight measures, the evacuees were taken to an unused hospital in the capital where they were to remain under quarantine for 14 days. Healthcare personnel wearing full-body protective suits accompanied the evacuees. Though authorities said all were in good health without any symptoms of the infection, measures will remain in place during the quarantine.

Policemen tightly guarded the Zekai Tahir Burak hospital. The evacuees and medical personnel who are monitoring them will be the hospital's only occupants during the quarantine period. The evacuees were screened by Turkish health officials including a team of six experts assigned to run blood tests and health checks to eliminate the potential risk of the virus spreading to Turkey. If any of the passengers showed any symptoms of the virus during the flight, they would have been taken to a designated area inside the plane. Health Minister Fahrettin Koca announced that six others from Wuhan chose not to return to Turkey.

Chinese Foreign Minister Wang Yi spoke with his Turkish counterpart Mevlüt Çavuşoğlu in a phone call and thanked Turkey for providing medical supplies to the Chinese side “at a crucial moment of prevention and control of the epidemic, which reflected the friendship of the Turkish and the Chinese people,” Lijian Zhao, deputy director-general of the information department at the Chinese Foreign Ministry tweeted on Sunday.

Speaking to reporters in Ankara on Sunday, Turkish Foreign Minister Mevlüt Çavuşoğlu detailed the successful evacuation operation dubbed "Operation Koca Yusuf" after the name of military cargo plane used for evacuation. He said the Health Ministry and Ministry of National Defense planned the operation after the Turkish embassy in Beijing supplied information on Turkish citizens in China. He said Ambassador Abdulkadir Emin Önen set up mail groups and has been in touch with Turkish citizens in the country. "The embassy set up four assembly points and planned transport of our citizens. Some citizens lived as far as 300 kilometers from the airport, and they were brought in by embassy cars. In some cases, our embassy staff paid out of their own pocket to ensure the transportation of Turkish citizens," he said. Çavuşoğlu noted that Albania, Georgia and Azerbaijan appreciated Turkish assistance for the evacuation of their citizens. He said China also hailed Turkey's medical equipment assistance to that country against the coronavirus. "Only Turkey and Japan sent such an aid. We saw social media posts thanking Turkey for 'friendship during difficult times,' and we are thankful to TİKA for providing such assistance," Çavuşoğlu said.

Health Minister Koca also spoke to reporters after a meeting of a special board set up by his ministry for coronavirus measures. He said that they were working with scientists on the issue and implementing all measures recommended by them. “We have no coronavirus cases in Turkey, and tests of 18 suspected cases did not find any virus infection,” he said. Koca said there was no sign of disease among evacuees. “We ran the first tests and their results will probably be announced on Monday,” he said.

He reminded that the second half of the school year would begin on Monday after a semester break and assured the parents that there wasn’t any reason “to be cautious.” He, however, warned against respiratory infections common in winter. Koca also said that the Ministry of National Education would inform parents on the virus.

Expert: No need to wear a mask here

As many countries reported coronavirus cases, Turkey has so far been safe from the outbreak. Several suspected cases involving Chinese tourists or Turks visiting China turned out to be false alarms. Professor Ateş Kara, a member of a special board set up by the Turkish Health Ministry assured the public and said there was "no need to wear masks" for people in Turkey.

Kara says there is "no special situation in Turkey" for such a protective measure against the virus. Speaking to Demirören News Agency (DHA), Kara said Turkey was one of the first countries to take measures when the coronavirus outbreak began, and the special board has been at work for about 15 days.

"We prepared a guidebook about coronavirus, how it started, how it infects people and when people should be suspicious of infection. It is a very detailed guidebook and was one of the first of its kind in the world. We later updated it with new data from the World Health Organization and other countries and will make a third update soon," he said.

"We primarily focused on prevention of the coronavirus from spreading to Turkey. We discussed conditions for the outbreak to spread to Turkey and possible sources. We defined risks and concluded that airports may be primary points of entry. Thus, preparations were made at the airports, and thermal screening systems were installed," he said. He said they are also working on a nationwide plan for prevention.

"Every health care worker all across the country was informed. Any team of paramedics anywhere in Turkey has been trained on how to quarantine a possible case. For instance, when a tourist admitted to an ambulance cites a past visit to China, he or she will be brought to the hospital with isolation measures. We have measures available in all hospitals, where and how to quarantine any possible case," he said. He said they meet on a daily basis as a special board.

"Currently, there is no need to wear a mask for people in Turkey, wherever they go," Kara reassured. On evacuees from Wuhan, he said they will be quarantined for "the longest period for possible incubation of virus. We treat them like they have the virus though they have already been isolated in China and did not contact anyone during their stay. We are certain that they are in good health, but we want to eliminate risks," he said.

Minister of Commerce Ruhsar Pekcan told Anadolu Agency (AA) on Sunday that they set up a working group for Turkish customs for measures against the coronavirus and sought coordination with the Health Ministry. The "Health Ministry informed us that the virus cannot remain alive on a dry surface for more than a few hours, so there won't be a problem for international cargos. Other countries have not taken action yet for the prevention of cargo transportation from and to China, and apparently, there is no risk. Still, we have taken measures and pursue an approach to equip our customs personnel with protective gear in any case," she said.

Pekcan said that the outbreak might hurt world trade but assured that Turkey can stave it off. "We are never dependent on one country for supplies. We have a product-based risk analysis program that warns us in case of an abnormal increase in exports and imports with one country. As for Chinese imports, we won't have a shortage of supplies. We work with other Asian countries too, we have alternatives," she said.

The minister also noted that an upcoming visit by China's Deputy Commerce Minister to Turkey was postponed. "We received a letter from them over Feb. 6 visit and they cited coronavirus outbreak as the reason for the postponement.