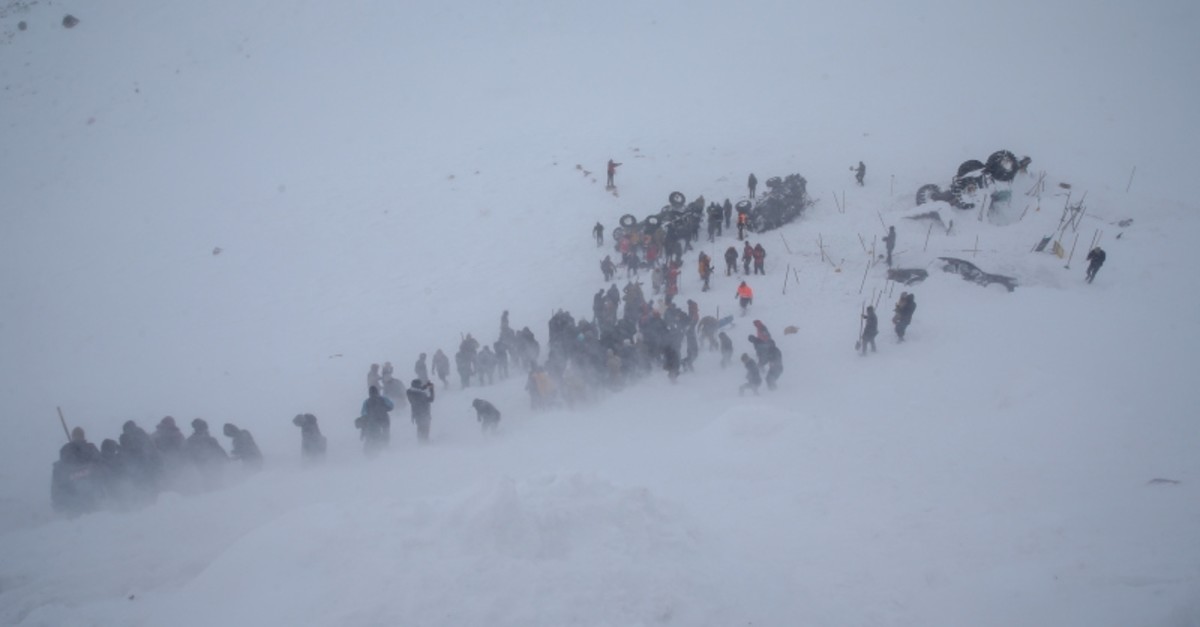 Rescue crews and locals are trying to find those who were trapped underneath snow after an avalanche, in Bahu00e7esaray, Van, eastern Turkey. (AA Photo)
by Daily Sabah Feb 04, 2020 7:42 pm

The death toll rose to 41 from two avalanches Tuesday and Wednesday in the eastern Turkish province of Van. Two others are still missing but authorities say they probably lost their lives under tons of snow. It was the worst avalanche disaster since 151 people were killed in one avalanche in southeastern Turkey's Şırnak in 1992.

Authorities said that the two incidents claimed 41 lives and two others were still buried under the snow. "They probably lost their lives. Crews continue combing the area," Health Minister Fahrettin Koca told reporters after meeting families of victims in Van. He said 77 people were injured in avalanches and four were still in intensive care while 20 others were expected to be discharged from the hospital later Thursday. The bodies of those who died in disasters were sent to their hometowns.

The victims of the second avalanche include gendarmerie personnel, village guards, firefighters and civilians. More search and rescue teams were dispatched to the area, while snowfall and blizzards have hampered the rescue efforts. Teams paused the efforts Wednesday night and resumed early Thursday. Sniffing dogs accompany crews in the area, which has been closed to the public for safety as authorities warn of more avalanches in the region. Disaster and Emergency Management (AFAD) set off explosive charges to create an "artificial avalanche" in the area as a preemptive measure against any potential avalanches.

Winter conditions in eastern Turkey regularly hamper daily life. A large number of roads connecting remote areas to city centers in the region are currently closed due to heavy snowfall, while crews work around the clock to keep the roads clear. Some 182 villages and neighborhoods in the region are already snowed in while crews struggle to clear the roads. In Van alone, access to 114 locations was closed due to bad weather.

Avalanches are quite common in eastern and southeastern Turkey, which has a harsh climate in winters. At least 1,997 avalanches occurred across Turkey in more than 100 years. The worst year was in 1992 when 443 people died in separate incidents.

Victims of the second avalanche had diverse backgrounds but had gathered for one common goal: saving lives. Orhan Demir, 42, and Umut Pişirici, 43, were veteran technicians working for a mobile operator. Their job was the maintenance of base stations in the region. They were called in to set up a temporary base station in the area where the first avalanche struck as cellphone reception was very poor because of the weather. The two men decided to join the search and rescue teams after setting up the station, only to be buried with the rest of the rescuers. Emrullah Ensari had just been promoted 15 days ago at a fire department in Van's Çatak district and was a new father when he joined a group of firefighters assisting the crews.

Spc. Cpl. Ufuk Deniz, a 23-year-old gendarmerie soldier, had phoned his brother Ümit shortly before the avalanche, telling him that his cellphone might be turned off as he would go "for an operation." He told him not to tell his mother about the operation so that she wouldn't worry. But maternal instincts kicked in and their mother Behiye felt her son might be among those killed in the avalanche when she saw the news on TV. She placed 160 calls but none were returned. Military officers accompanied by paramedics broke the bad news to Deniz's family in northern Turkey's Kastamonu.