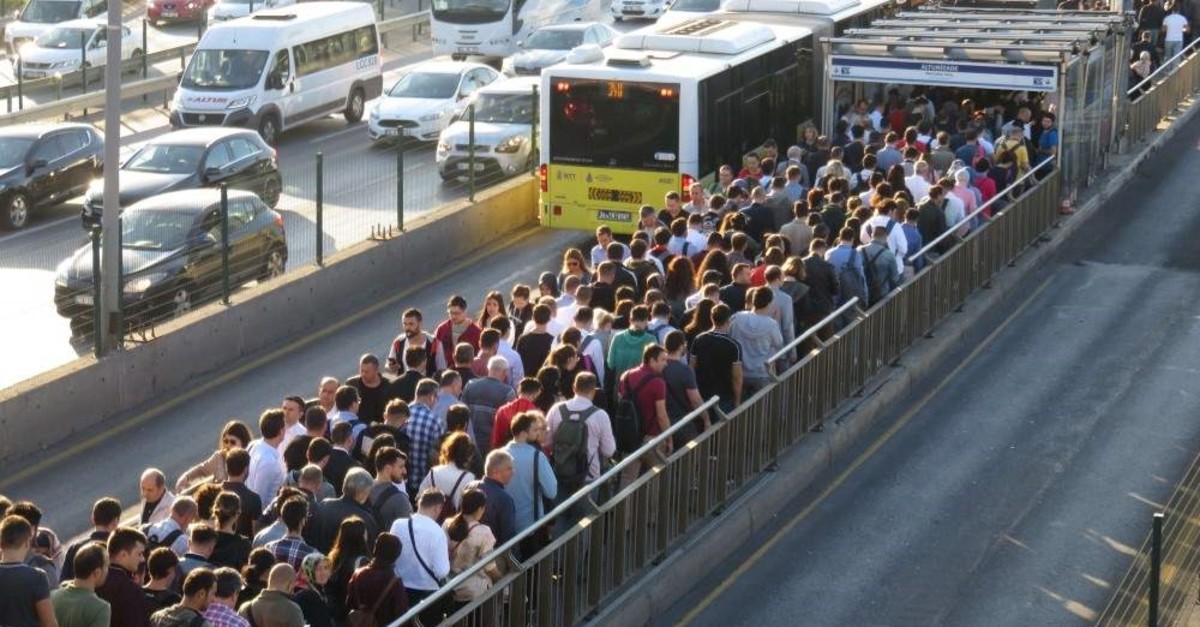 People enter and leave a metrobus station in Altunizade district of Istanbul, Oct. 3, 2019. Istanbul remains Turkey's most populated city with a population of over 15.5 million people. (DHA Photo)
by Daily Sabah with AA Feb 04, 2020 5:29 pm

Striving to counter concerns of an aging populace, Turkey saw a slight rise in population in 2019, the country's official statistics agency announced Tuesday

Turkey's population reached 83.15 million as of the end of 2019, a 1.39% rise year-on-year, the Turkish Statistical Institute (TurkStat) said Tuesday.

TurkStat data shows that Turkey's population increased by 1.15 million from the previous year. The slight rise may help console concerns that the country is facing an aging population that it hopes to boost over the next decade.

Some 92.8% of Turkey's population lives in cities and district centers – up 0.5 percentage points annually – compared to 7.2% in towns and villages. Turkey's population density – the number of people per square kilometer – surged by two people on a yearly basis to reach 107 last year.

The world-famous metropolis was followed by the capital Ankara with 5.64 million inhabitants and the Aegean province of Izmir with 4.37 million. Bursa, a key industrial province, was Turkey's fourth most populated city with 3.05 million people, and the Mediterranean resort city of Antalya came fifth with 2.5 million.

Located in eastern Turkey, Tunceli was the least-populated province with just 84,660 people, followed by the northeastern city of Bayburt with 88,843 and Ardahan in the northeast with 97,319.

Although Turkey still maintains a young population, the share of senior citizens keeps growing. Turkey is not alone in this trend. Much of the world, particularly developed countries, face aging populations with the average life expectancy pushing well over 70 and even 90 in some places. The proportion of the elderly population is critical for countries in terms of economic growth, which is dependent on a younger workforce. Turkey ranks 66th among 167 countries in terms of the proportion of elderly citizens in the total population.

Thus, the country seeks to promote childbirths and is increasingly supportive of working mothers. Last year, the government launched a new package of incentives for families with twins and triplets, delivering cash for the care of 28,938 newborn twins and triplets. The state pays TL 150 monthly per child and so far, paid TL 26.2 million to 14,350 parents in total. The total cash assistance for newborn babies reached TL 477 million for more than 1.1 million babies in 2019. In multiple births, families are entitled to a monthly allowance for two years, on the condition of vaccination.

The state also makes a one-time payment of TL 300, TL 400 and TL 600, respectively, to parents for their first, second and subsequent newborns.