No rest for Turkish rescuer, from Somalia to China 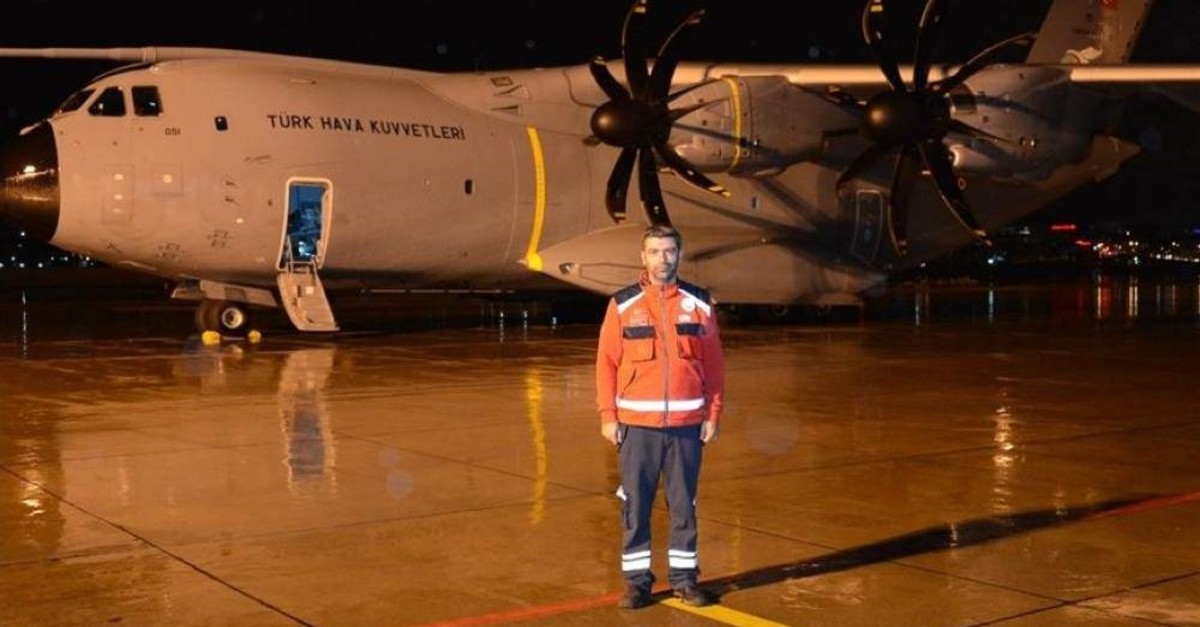 Evren Karaal poses in front of Koca Yusuf, the military cargo plane he traveled on for an evacuation operation from China, in this undated photo. (AA Photo)
by Anadolu Agency Feb 06, 2020 12:19 pm

Saving someone's life is something most people would find hard to forget, but it has become a standard practice for Evren Karaal, a paramedic with Turkey's National Medical Rescue Team (UMKE) in the capital Ankara. Within a period of just two weeks, 38-year-old Karaal has taken part in rescue operations in Somalia following a suicide bombing, in Turkey's Elazığ province, which was hit by a powerful earthquake, and in China's Wuhan city, the epicenter of the deadly coronavirus. "Right after learning about the incident, I volunteered to go to Somalia," he said, referring to the suicide bombing in the capital Mogadishu on Jan. 18 that killed three and wounded dozens, including Turkish contractors. The paramedic and his crew brought Turks and Somalis wounded in the deadly incident to Turkey, where they were given medical care.

Only a couple of days after returning home, a devastating 6.8 magnitude earthquake jolted Elazığ province in eastern Turkey on Jan. 23 and scores of homes collapsed, leaving 41 dead and 1,600 wounded. Karaal once again urged disaster and health authorities to send him to the quake-hit area so he could extend a helping hand to the locals. He said his rescue team arrived at the scene after eight hours, set up tents and started delivering much-needed humanitarian aid to local residents, then made their way to the collapsed houses hoping to save those trapped inside. "After working for hours and getting tired, we heard about a mother and her daughter who were trapped inside a building," he said, adding that the team launched a rescue operation right away, although it was a risky place that was difficult to operate in. "We saved the two ... The child was wounded but was able to speak. Every single word she uttered warmed my heart and gave me the strength to try harder for others who could have been alive," he said.

Emphasizing that the morale of the rescue team peaked following the rescue of the child, he said: "The health personnel and I became fully focused on rescuing others. We did not fear or even think about abandoning people to their fate."

Upset over a death toll rising to over 40 but proud of some successful operations, Karaal went back to the capital, where his rescue team UMKE is based, and embraced his family, planning to rest for a while. But duty once again called.

Since late December 2019, China has been haunted by a novel coronavirus that has killed some 500 people. While Wuhan city, ground zero of the outbreak, was put under quarantine by state officials, many foreign nationals were trapped there, including Turkish expats looking forward to being evacuated. "Our team leader (Mehmet Celal Almaz, a veteran of the July 15, 2016 foiled coup attempt) informed me about the evacuation plan that included the risk of being infected and wondered who should go," Karaal said, noting that the team did not want him to join the operation as he had been too busy lately. However, he volunteered once again without hesitation and urged his team leader to assign him to take part in the operation that would evacuate dozens of Turks and some other foreign nationals. "We waited for some five hours before they (evacuees) were aboard," he said, referring to the waiting period at Wuhan's airport. "They all looked exhausted and concerned. You could see the fear in their eyes."

Stating that the rescue team did everything possible to relieve them, he said the team members checked the patients' breathing and body temperatures and provided them with initial care. Once the operation was successfully completed and the plane landed at a military airport in Turkey's capital Ankara, he was finally free. But there was a catch – he is now in quarantine with all of the other people on the plane, a measure taken by the Health Ministry in an effort to reduce the risk of an outbreak in Turkey.

Asked about what motivated him for rescue operations and why he is so bold to risk his life, he recalled an incident that changed his perspective toward life and human beings. "We were really poor when I was a little kid. There were times when the whole family shared a single loaf of bread. My father could not find a job and was fed up with life as he struggled to provide for his family," he said. "One day, my dad attempted to commit suicide, but we saved him." It was that moment he experienced at the age of 8 that made Karaal who he is today. "I swore to myself not to leave any needy individual behind and help them at any cost," he said.

Years later, he received education and training as a paramedic so that he could keep his promise. And today, he goes anywhere he can to help people who are desperate, whether it is a region hit by a natural disaster or struck by terrorist attacks. Hopefully, after concluding the 14-day quarantine process without any complications, he will be back with his family – unless duty calls again.