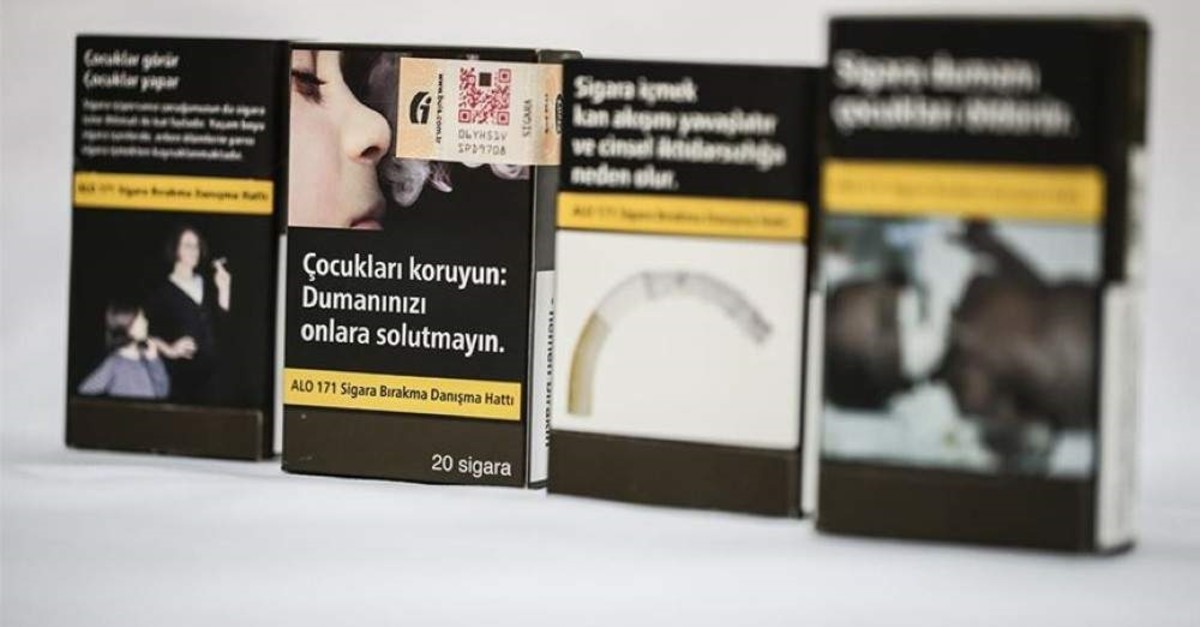 Flashy and colorful brand names were replaced by warning texts and pictures in the new plain packaging for cigarettes. (AA Photo)
by Daily Sabah Feb 09, 2020 5:16 pm

Plain packaging for cigarettes has reached its goal as more smokers have begun reaching out to government agencies for help in quitting, Agriculture and Forestry Minister Bekir Pakdemirli said Sunday.

Speaking to the Anadolu Agency as Turkey marked National No Smoking Day, Pakdemirli said studies have shown an increase in the desire to quit and a drop in enjoyment among smokers since plain packages hit the shelves.

"The research papers on plain packages shows that 81% of smokers think about quitting at least once a day, and 70% find cigarettes less satisfying, while 66% think that the cigarettes have suffered a drop in quality," Pakdemirli said, as he called on smokers to take a step toward quitting.

Under the supervision of the ministry, Turkey in December began implementing plain packaging, a single, standard pack without logos, graphics or similar signs promoting the cigarettes. Each pack has a mandatory space taking up 85% of its size for health warnings with photos.

While skeptics have argued the long-term impact of the packages, experts say it at least serves as a deterrent for impressionable young smokers attracted to shiny colors and splendid logos or brand names on cigarette and tobacco packaging.

According to the World Health Organization (WHO), there are currently 1.1 billion smokers around the world. Turkey currently ranks 40th among the world's nations in terms of smokers, with 25.95% of the population addicted to cigarettes.

While cancer, especially lung cancer, is the most well-known cause of smoking, cigarettes are actually responsible for the third leading cause of death in the world.

"Smoking is the most important cause of chronic obstructive pulmonary disease (COPD), the fourth most common leading cause of death in the world," said Dr. Ece Yiğit, an interior medicine specialist.

COPD is an incurable disease, but its symptoms can be treated and quitting smoking stops the progression of the condition.

"When smoking is stopped, circulation in the body increases, oxygen-rich blood is better carried to the cells and organ functions improve," said Yiğit.

Experts estimate there are 5 million undiagnosed COPD patients in Turkey.

While the number of smokers in Turkey has been declining with initiatives and campaigns, the deadly addiction still takes a heavy toll. The country spends a whopping $25 billion annually on smoking, either in terms of the tobacco itself or treating the diseases it causes. According to the Fight Against Smoking Association, the public spends $15 billion per year on cigarettes while the government spends $10 billion to treat smoking-related illnesses.

The ruling Justice and Development Party (AK Party) government has taken various steps to halt cigarette use in recent years. The country introduced a nationwide indoor smoking ban in 2009 at restaurants, bars and similar establishments and gradually extended its reach to other enclosed spaces over the years, in addition to a complete smoking ban on school grounds and the sale of tobacco products at educational institutions.

Authorities have stepped up inspections against violations of the smoking ban in recent years. Some 1,500 teams inspect businesses and public buildings around the country on a daily basis to check for violations of the ban.

The Health Ministry also set up a hotline for citizens to report violations, while an app called Green Detector allows users to immediately notify authorities of persons and venues failing to uphold the measures. Since 2009, teams have carried out more than 22.8 million inspections.

The Health Ministry also offers advice to those trying to quit, through a hotline set up in 2010. The hotline receives about 5,000 calls every day from smokers. A ministry website gives tips on how to quit smoking and allows users to calculate how much money they can save by not buying cigarettes. Figures indicate that since the smoking ban has come into force, the prevalence of smokers has decreased, though not as much as expected.

Increased taxes on cigarettes and free medical treatment for smokers seeking to quit have also aided the decline in smoking. Still, diseases related to smoking claimed the lives of more than 65,000 people last year, according to Tobacco Atlas, a civic society initiative researching the tobacco epidemic.
RELATED TOPICS