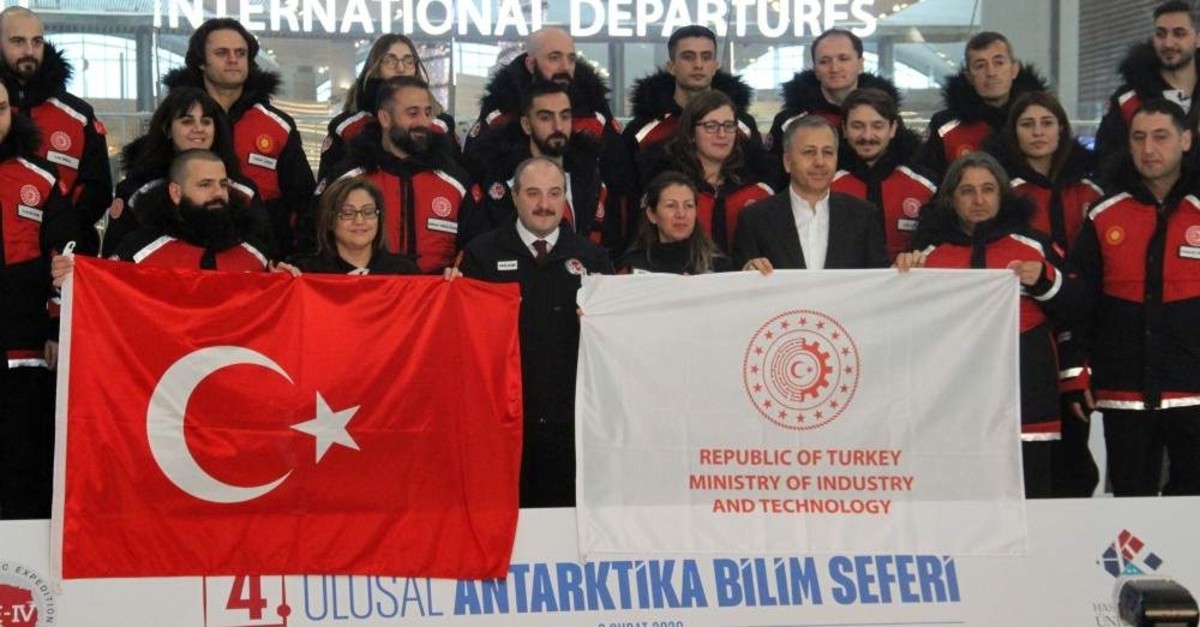 The National Antarctic Science Expedition team departed from Istanbul for Antarctica on Sunday, where 24 scientists will research the impact of climate change on the world's frozen continent.

The team departed from Istanbul Airport with a ceremony attended by Industry and Technology Minister Varank and Istanbul Gov. Ali Yerlikaya, along with officials from various research and science agencies.

Led by associate professor Burcu Özsoy, who was also at the forefront in previous expeditions, the team will be staying in Antarctica until March to collect data and samples, as well as conducting various experiments about climate change.

Speaking at the farewell ceremony, Özsoy said the team consisted of highly regarded experts from various fields and the expedition would carry out research on 15 projects.

"The researches we have conducted in the past three years have been published in more than 10 high-impact scientific journals ... We will publish important pieces this year again. Our expedition will last 40 to 45 days," she said.

This year, the team will also be monitoring the level of ultraviolet radiation, thanks to a device attached to the Meteorological Observation Station established at the Turkish Science Base. The station has been recording changes in wind speed, wind direction, air temperature, relative humidity, air pressure, precipitation levels, snow thickness and daylight hours for the past year.

Özsoy was also appointed the head of the newly-founded Polar Research Institution (KARE) – a requirement stipulated in the Antarctic Treaty System, of which Turkey is trying to become a more active member. Currently holding observer status, Turkey has the intent to carry out scientific and political work and meet the criteria to become a consultative member. The treaty, which was signed in 1959, set aside Antarctica as a scientific preserve and research zone, banning all military activities on the continent.

Giving Turkey's work on the frozen continent a corporate structure, KARE will also act as the executive body overseeing work at the Turkish base.