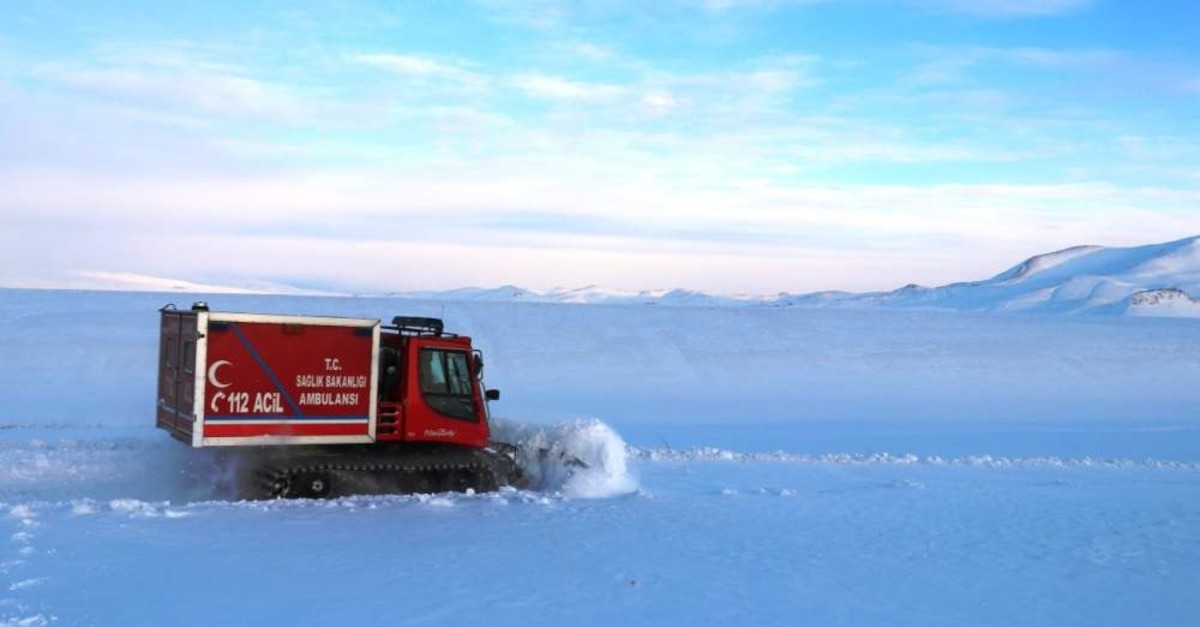 Winter takes its toll in Turkey's eastern regions which are usually the coldest parts of the country during the season. Yet, temperatures broke another record in 2020: Residents of Göle, a small town in the northeastern Ardahan province saw temperatures drop to minus 40 degrees on Sunday night. Göle had the unenviable record last year as well, at minus 32.5 degrees.

Freezing temperatures, accompanied by snowfall and blizzards, also cut off access to critical locations like an area in Van province's Çaldıran district where 13 migrants are believed missing. Search and rescue crews are already blocked by piles of snow in Van's Bahçesaray where 41 people were killed last week while one person is still missing due to two avalanches.

Van Governor Mehmet Emin Bilmez says crews can only work in the area once the weather improves, noting another road connecting Van to its Çatak district was already closed due to avalanche risk. Bilmez told İhlas News Agency (İHA) on Monday that they received a tip-off that 13 illegal migrants died in a remote area of Çaldıran, near the border with Iran, but the area was inaccessible. "We had phone calls (from relatives of migrants) from Iran, Germany and (the Turkish city of) Diyarbakır, and these people are believed to have been frozen to death while crossing the border. Even if crews can reach the area, they cannot recover anyone because of storms and blizzards. The visibility is zero now," he said.

Bilmez said the only way to clear the roads and reach any stranded persons was for the blizzards to end. "Unfortunately, such cases of migrant deaths happen in the region. Last year, we found about 100 bodies and only after the snow thawed," he said. The governor says that although they were able to clear the snowed road, blizzards led to their closure almost as soon as the road was cleared. He also warns against the risk of avalanche, especially in Çatak district and urged the public in rural areas not to leave for towns or central Van.

The meteorology agency measured the lowest temperature in Turkey in Göle on Monday night at minus 40 degrees and announced temperatures will be back to the seasonal normal today. In Aşkale district of Erzurum, temperatures were around minus 35 degrees. The Kars province followed them with a temperature of minus 31 degrees while temperatures dropped to minus 26 degrees in central Ardahan.

The highest temperatures on Monday was zero degree in Iğdır while temperatures fluctuated around minus 4 degrees in Tunceli. In Ardahan, temperatures were minus 10 degrees.

Water in a dam which fulfills most of the eastern provinces of Kar's water needs has frozen, while roads and sidewalks are covered with ice. Enormous icicles engulfed eaves while utility poles leaned down due to the weight of icicles.

Daily life was disrupted in cities, from Kars to Ağrı as slippery roads caused accidents and stalled traffic both for vehicles and pedestrians. Motorists covered their cars with blankets as a primitive measure against freezing engines. In Ardahan, residents had a hard time thawing their freezing eyebrows and lashes.

In Erzurum, public fountains gave out icicles instead of water while firefighters spent the day sawing off the icicles posing danger to passersby. Garbage collectors had to use axes to chop off frozen and heavy garbage bags.

Winter conditions also dealt a blow to wild animals' search for food. In Ağrı, Turkish Red Crescent workers left a ton of food for wild animals in rural areas. In the countryside where snow depth reached one meter on higher ground, volunteers scattered grain and vegetables in places near the remote villages where wild animals are known to be roaming. "We are members of a religion based on compassion. We have to do this," Orhan Tatlı, head of Red Crescent's local branch, told Anadolu Agency (AA). "The winter has been harsh for the last one week and animals can barely find food," he said, noting that bad weather that almost continue for six months in a year posed a challenge for animals.