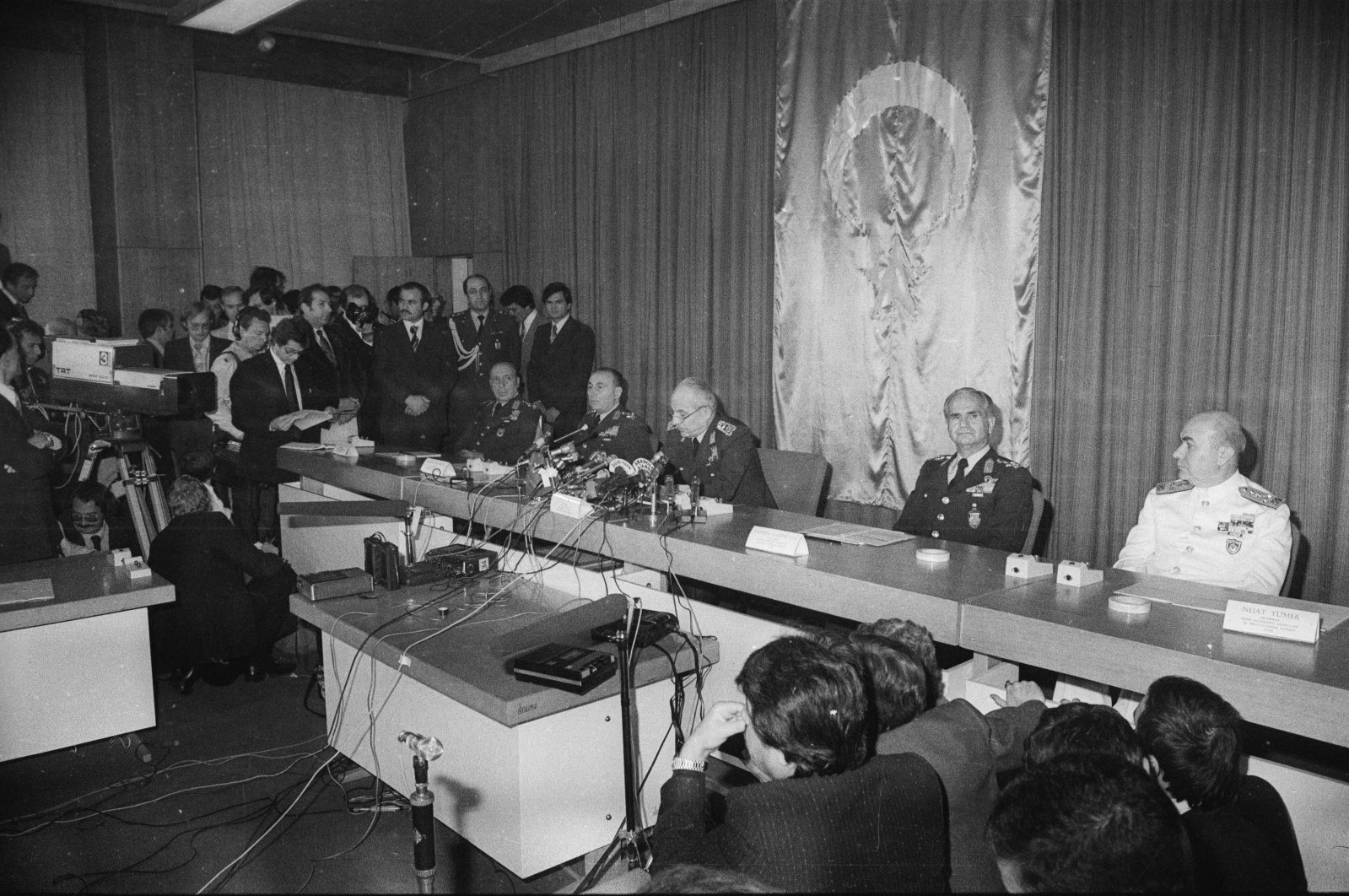 Even after four decades, the events of Sept. 12 still haunt the citizens of the republic, who managed to stave off the latest attempt by a terrorist group to crush their democracy in 2016

Sept. 12, 1980, is just another date in the chronology of Turkey’s coups d'état. A powerful military tutelage long made the country accustomed to interventions in its democracy, but 1980 stands out as one of the most severe.

The coup that changed the lives of millions was the last “done in the chain of command,” and today is remembered for its torture, civilian mistreatment and human rights violations that followed it.

The public knew something was wrong when tanks rolled through the streets and soldiers sternly told those who were outdoors in the early morning to return home, but the coup really unfolded when Kenan Evren, then the chief of the general staff, read out over the radio that the army had seized control, making the “declaration” of the military-run National Security Council (MGK). The army’s justification was to put an end to the political turmoil aggravated by the rising conflict between left-wing and right-wing militant groups. The army was already planning a coup for July 11, 1980, but when the government won a confidence vote, they had to postpone their plans for what they called “Operation Flag.”

The 1980 coup was the third time the army had openly intervened in an elected government, but it would not be the last as it happened again more than a decade later. Finally, the public found the power to oppose the military on July 15, 2016, thwarting the Gülenist Terror Group (FETÖ).

Following the 1980 coup, the five-member MGK was formed consisting entirely of generals, with Evren, Land Forces Cmdr. Nurettin Ersin, Navy Cmdr. Nejat Tümer, Air Forces Cmdr. Tahsin Şahinkaya and Gendarmerie Cmdr. Sedat Celasun its members. The MGK controlled the country with decrees until civilian rule was restored in November 1983 through elections. In the takeover's aftermath, there was a string of anti-democratic activities, from the closure of political parties to the banning of nongovernmental organizations, as well as the removal of key politicians, who were briefly exiled, from the government.

The coup leaders’ most notorious practice was the death sentence. Turkey saw its highest number of executions by hanging in a very short period of time after the overthrow. First sentenced to death were left-wing activist Necdet Adalı and right-winger Mustafa Pehlivanoğlu. Both were executed in October 1980. Erdal Eren was the youngest victim of the putschists. The 17-year-old was executed by hanging on March 19, 1980, after a sham trial over his alleged killing of a soldier before the coup. He has become a symbol of junta's as it had “tampered” with his age, making him 18 so he could be eligible for hanging. Evren’s remarks about the youth's execution reflected the brutal mindset of coup leaders. “Shall we not hang them but feed them, then?” he infamously said upon Eren’s death.

The junta also ordered the detention of 650,000 people. Some 230,000 were put on trial and courts asked for the execution of more than 7,000, although only 517 people were sentenced to death and 50 were hanged. Another 14,000 people lost their Turkish citizenship, while 30,000 more lost their jobs due to blacklisting by the junta. Among them were teachers, academics and journalists.

The MGK also introduced a new constitution, which long ensured the prevalence of military tutelage and limited political representation as well as the exclusion of junta leaders from any future trials for their crimes.

It was only after a 2010 referendum that the article in question was lifted and paved the way for the trial of Evren and others, including his right-hand man Gen. Tahsin Şahinkaya, the coup’s commander of the Turkish Air Force. Trials began in 2012, but both men skipped the hearings citing “health reasons.” They countered the long list of allegations against them, but both men were sentenced to aggravated life imprisonment in 2014 and per military regulations, the rank they kept after retirement was demoted to the lowest-level, private. Evren and Şahinkaya died within three months of each other in 2015 during their appeals process.