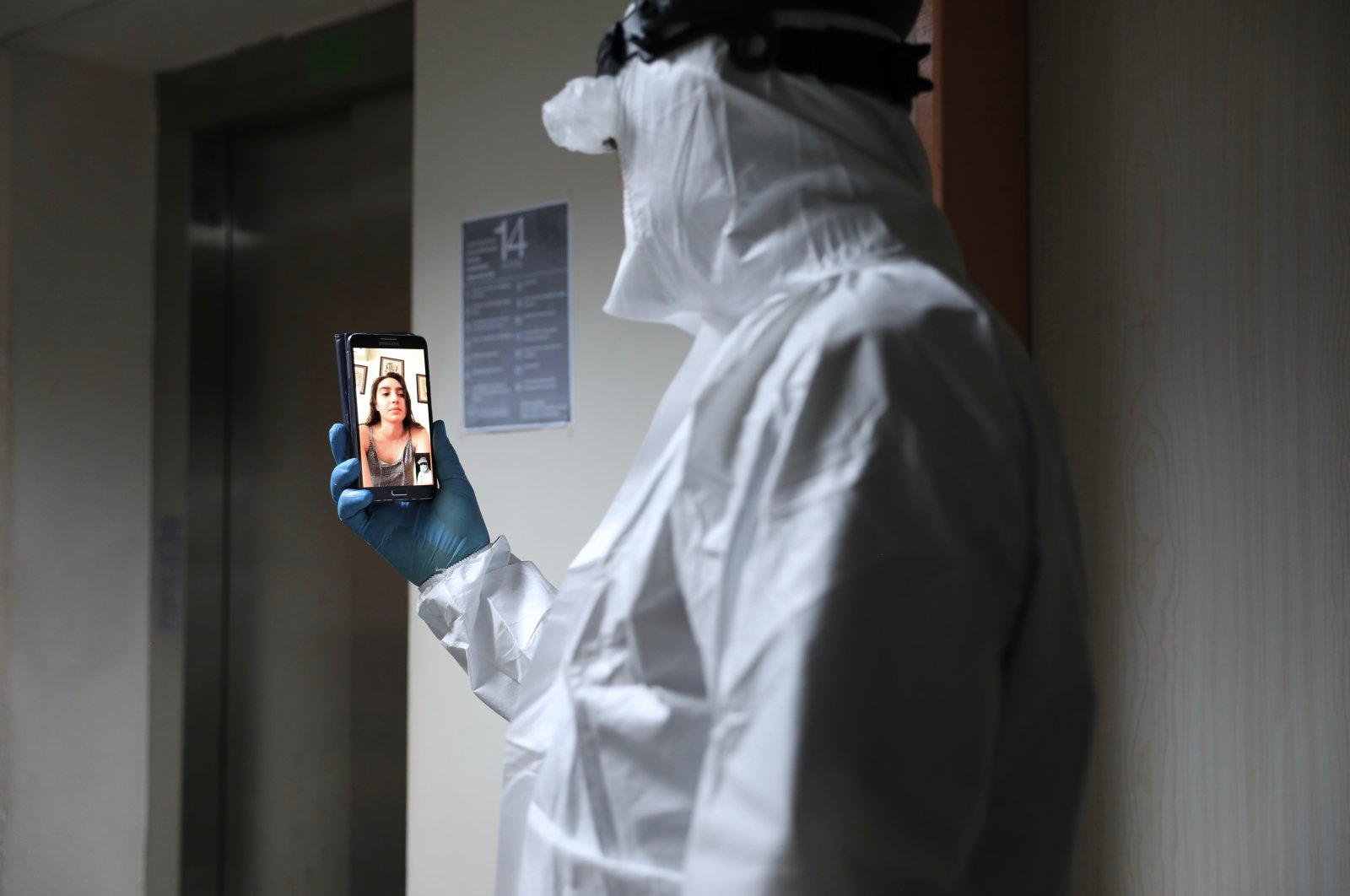 Health care workers, Turkey’s warriors against the coronavirus pandemic, missed the chance to spend Father’s Day with their children on Sunday though they are happy to continue their 'sacred duty'

A bittersweet Father’s Day was in store this year for doctors, nurses and other health care workers. “To be a father is a beautiful thing, but duties come first,” says Mehmet Muku, who heads a COVID-19 laboratory in the southern city of Mersin, as he hunches over test tubes with a tired but determined gleam. The 51-year-old father of one is among thousands of health care workers forced to mark this year's Father’s Day without the warm presence of their families. Muku, like others, cannot visit his home, and his family are not allowed to visit the hospital out of fears of further COVID-19 infections.

For months, health care workers have been at the front line against the pandemic, which has killed thousands of people across Turkey. They spend hours in cumbersome protective clothing and can only see their families via video link or during brief conversations without contact at the door of their homes.

Muku has a 6-year-old daughter and says though it came late in his life, fatherhood was something beautiful he could not find the words to describe. On his days off, he can visit his daughter Asel – but this Father’s Day, he was confined to his laboratory where he checks samples from coronavirus patients. “Her mother holds her whenever I go home because she screams “daddy” and starts to run toward me. I try my best not to disappoint her, and sometimes, I sneak into the house secretly so she won’t try to touch me. These are difficult times. Fatherhood is wonderful, but my duty is sacred. I am happy to help patients. We are soldiers here, and soldiers cannot abandon their posts,” he told Anadolu Agency (AA) on Sunday.

Thirty-year-old Ali Rıza Göçen, an intensive care unit nurse, looks forward to going home after a busy shift. Speaking of the inability to touch his daughter as she runs toward him, Göçen said: “It upsets me to stay away from her, but seeing another patient cured makes me feel better again."

Along with doctors and nurses, contact tracers, too, have been forced to spend time away from their families. Contact tracers are teams of health care workers who investigate, find and isolate potential COVID-19 patients who have been in contact with diagnosed patients. Like other health care workers, they have to stay in specially allocated dormitories or hotels for them after their shifts and can rarely see their children. Dr. Metin Kızılelma, who heads an infectious disease department of local health authority in the western city of Izmir, says contact traces play a key role in the fight against the pandemic and has to act meticulously. The teams are also assigned nowadays to the arduous task of taking samples from randomly chosen households to determine nationwide immunity levels via antibody testing. Kızılelma and others are visiting more than 4,200 households in the city, taking swabs from people. “I have been quite busy since March. I marked Father’s Day away from my son for the first time in 22 years. He called me in the morning and congratulated my day. He told me he was proud of me. It was so emotional,” he says. Nuri Özdemir, another member of contact tracing teams, says his children often call him to find out where he is and ask when he will come back. “I call citizens to be careful against the pandemic, to wear masks and be cautious about social distancing so that we can spend our next Father’s Day with our children,” he says. Mert Aydın, a doctor working with contact tracers, says it was “a Father’s Day to remember” for him. “I could only talk to my daughter via videocall. I told her I would be with her soon and we would celebrate the day next year together. It was a very emotional, special moment,” he says.

For some children, Father’s Day will never be the same again. Onur Taşçıoğlu is among them. His father Cemil Taşçıoğlu was a prominent professor in Istanbul who was also the first health care worker who fell victim to COVID-19. “It is not easy. This is my first Father’s Day without him,” Taşçıoğlu told Demirören News Agency (DHA). “I used to call him first thing in the morning every Father’s Day. Now, I call my mother because she has been like a father to me now. It is difficult, but I have to stand strong,” he says.

Taşçıoğlu was a professor of internal medicine at Istanbul University who trained thousands of medical students in Turkey. He was also the doctor who diagnosed the first patient with COVID-19. After being infected, he was admitted to Istanbul University’s Faculty of Medicine on March 16 with symptoms of fever, cough and respiratory distress. Described by his close colleagues as a pillar of the community, whom everyone loved, from his assistants to his students, Taşçıoğlu continued practicing even past retirement age. Before his untimely passing, he made many important contributions to internal medicine. His name was immortalized in the name of a hospital opened in Istanbul to help fight against the pandemic. “I never knew he was loved by so many people,” Onur Taşçıoğlu says.
“When he was first diagnosed, his students started calling me. This was how I found out how close my father was with his students. He was very informal and earned both their respect and admiration,” he recounted. “The only thing I wish is that he could have been able to spend more time with his grandchildren. Even when he was in intensive care, he had photos of his grandchildren, me and my siblings on his cellphone, and I later found out that he would look at them longingly." The last time he talked to his father was before he was taken into intensive care. “I sent him some personal belongings and a message that said I was looking forward to his recovery. He called me to say thanks and told me: 'I don’t know what will happen to me. Take good care of yourself.' This was our last conversation,” Onur Taşçıoğlu said.