All Turkish provinces now have lower risk of COVID-19 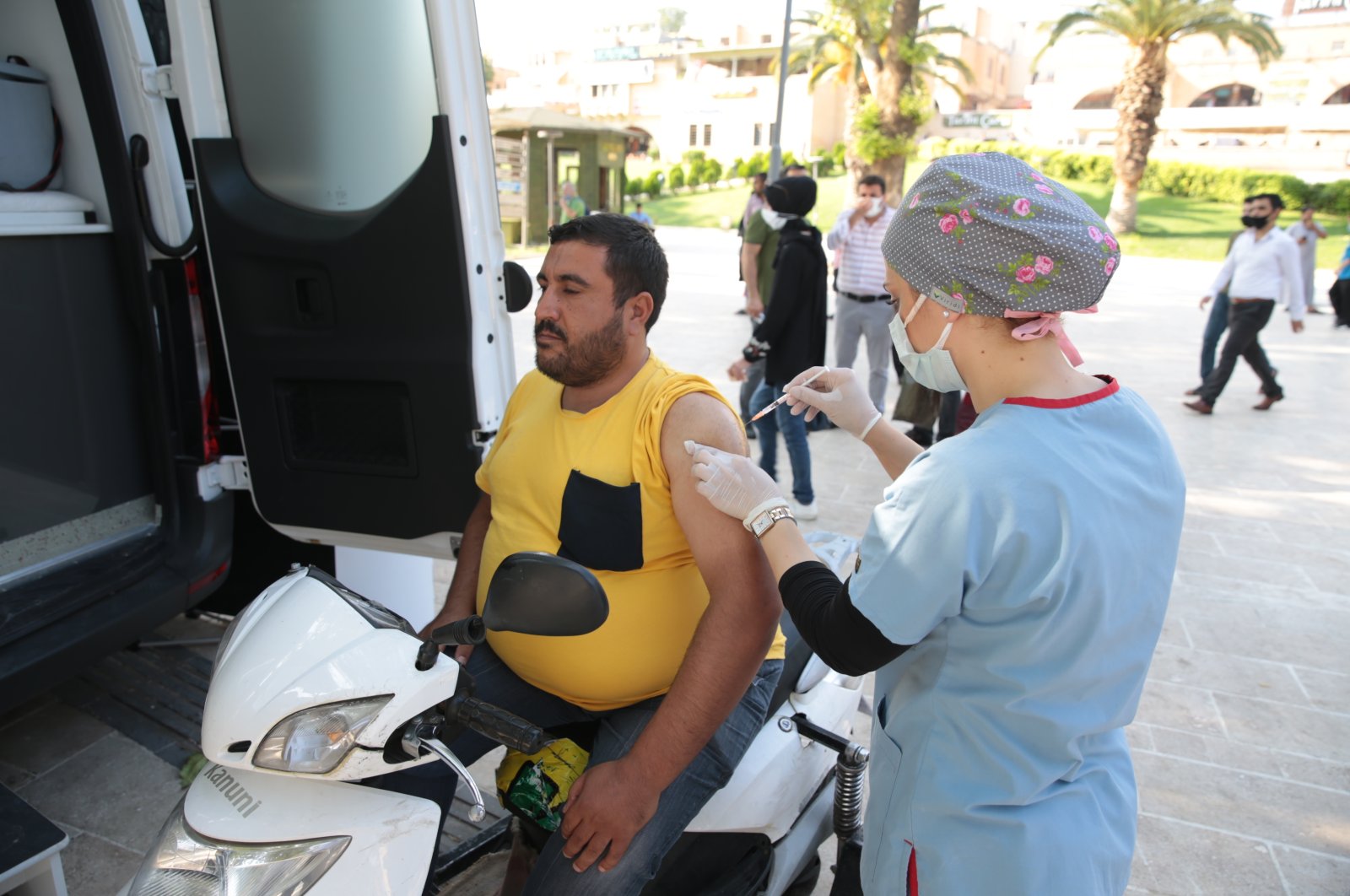 Şanlıurfa, the only Turkish province at high risk of COVID-19 clusters due to a low vaccination rate, managed to upgrade its status to a lower risk level amid an intense vaccination program

Health Minister Fahrettin Koca announced late Thursday that Şanlıurfa, among the 81 provinces in the “red category” of locations with the highest risk of COVID-19, exited the category with an improving vaccination rate. It joined many other eastern provinces that managed to boost their vaccination rate after a slowdown.

The province was below a 55% vaccination rate for a long time despite efforts to relieve vaccine hesitancy among the public.

As part of their vaccination program, the Health Ministry had earlier divided provinces into four color codes: blue, yellow, orange and red. Blue represents locations with the highest vaccination rate and it is followed respectively by the yellow, orange and red categories. The blue category consists of almost all western provinces and some in the south; while the yellow category consists of a few provinces in the east, the majority of central provinces and the largest province Istanbul.

Turkey increasingly seeks to improve vaccination numbers as the number of daily coronavirus cases and fatalities climb up, with 200 dying just this week. So far, it has administered more than 91 million doses since the vaccination program started in January 2021. More than 36.1 million people have received two doses, while another 47.2 million have had their first doses. The number of people who have recieved their third dose is 8.1 million, in a country of more than 83 million people. The country is required to have at least a 70% vaccination rate to reach the critical threshold of mass immunity. However experts warn that a higher rate may be required in light of the fast-spreading delta variant.

In parallel with the normalization process, where almost all restrictions related to the pandemic were lifted in July, Turkey also expanded the vaccination program by including everyone at the age of 18 and above. The eligibility age was later dropped to 15. Still, vaccine hesitancy, fueled by conspiracy theories spread by anti-vaxxers on social media, has dealt a blow to the program. Polls show vaccine hesitancy is particularly prevalent among the youth. Şanlıurfa, for instance, has a large youth population.

The province has struggled with a low vaccination rate in the past two months, forcing authorities in the province to mobilize all efforts to boost the rate, which was only 47.8% on Aug. 18. Local health authorities set up vaccination venues all across the province, while mobile crews were deployed to remote neighborhoods and villages for vaccinations at home. The provincial governorate launched a campaign, holding a lottery for those vaccinated and handing out gifts such as bicycles, tablet computers or scholarships to winners. Some towns offered gift cards to those vaccinated individuals who won. Businesses also mobilized to promote vaccination, giving out free food and discounts to vaccinated residents.

Associate professor Abdullah Solmaz, head of Şanlıurfa Public Health Services branch of the Health Ministry, told Anadolu Agency (AA) that some 100 crews were on the field in rural parts of the province for vaccination. “We want to have a 100% vaccination rate, so, we call everyone to get their jabs,” Büşra Demirtaş, a member of the mobile health crews, says.

Zeliha Çelik, a woman vaccinated by mobile crews in the rural Ilhan neighborhood, said everyone should get vaccinated, “so that we can be back to the old days and can go anywhere freely.”

The vaccination is also important for the resumption of in-person education, scheduled for Sept. 6. Koca tweeted on Friday that the number of teachers with two doses of vaccine exceeded 72% and called for more to get their jabs.

Though vaccination helps to decrease coronavirus cases, the pandemic indirectly triggers other diseases and health conditions. Experts expect a rise in diseases in the coming months and years as most people avoided visiting hospitals for their health problems in fear of the pandemic. On the other hand, the mandatory mask use Turkey introduced at the beginning of the pandemic also helped to decrease seasonal illnesses. However now they are making a comeback, linked to relaxed mask use among the public following the launch of the normalization process.

Masks are still mandatory, but professor Hakan Oğuztürk warns that people started increasingly ditching them this summer and this new reality boosted flu cases in August, long before the usual flu season in autumn and winter. Oğuztürk, who works as training director at Ankara City Hospital’s emergency medicine clinic, says flu cases have seen a surge especially after Aug. 15. “I interpret it as the result of people being less compliant with personal hygiene rules. We could not adhere to mask use this summer,” he lamented.

Many people on social media had complained of flu symptoms recently, unusual for the season and some expressed fears that they may be infected with the coronavirus. Oğuztürk told Anadolu Agency (AA) that flu symptoms resemble COVID-19 symptoms. “In the delta variant, we see headaches, sore throats and runny noses among symptomatic patients. The same applies to the flu,” he said, adding that these three symptoms are much more severe than the flu among people infected with delta. He recommends polymerase chain reaction (PCR) tests for people unsure if they are infected with COVID-19 or flu.

Oğuztürk warned that increasing social mobility, ignorance of social distancing and mask rules “provided opportunities for viruses,” and in this process, flu and other diseases infected through respiration have been “active.” “Personal hygiene is important against all these viruses. We have to continue wearing protective masks, especially in indoor spaces. When you are outdoors, you don’t need to wear masks if you are far from others as the virus has limited capacity to infect others outdoors,” he said.