Another miracle rescue as Turkey assesses quake damage in Izmir 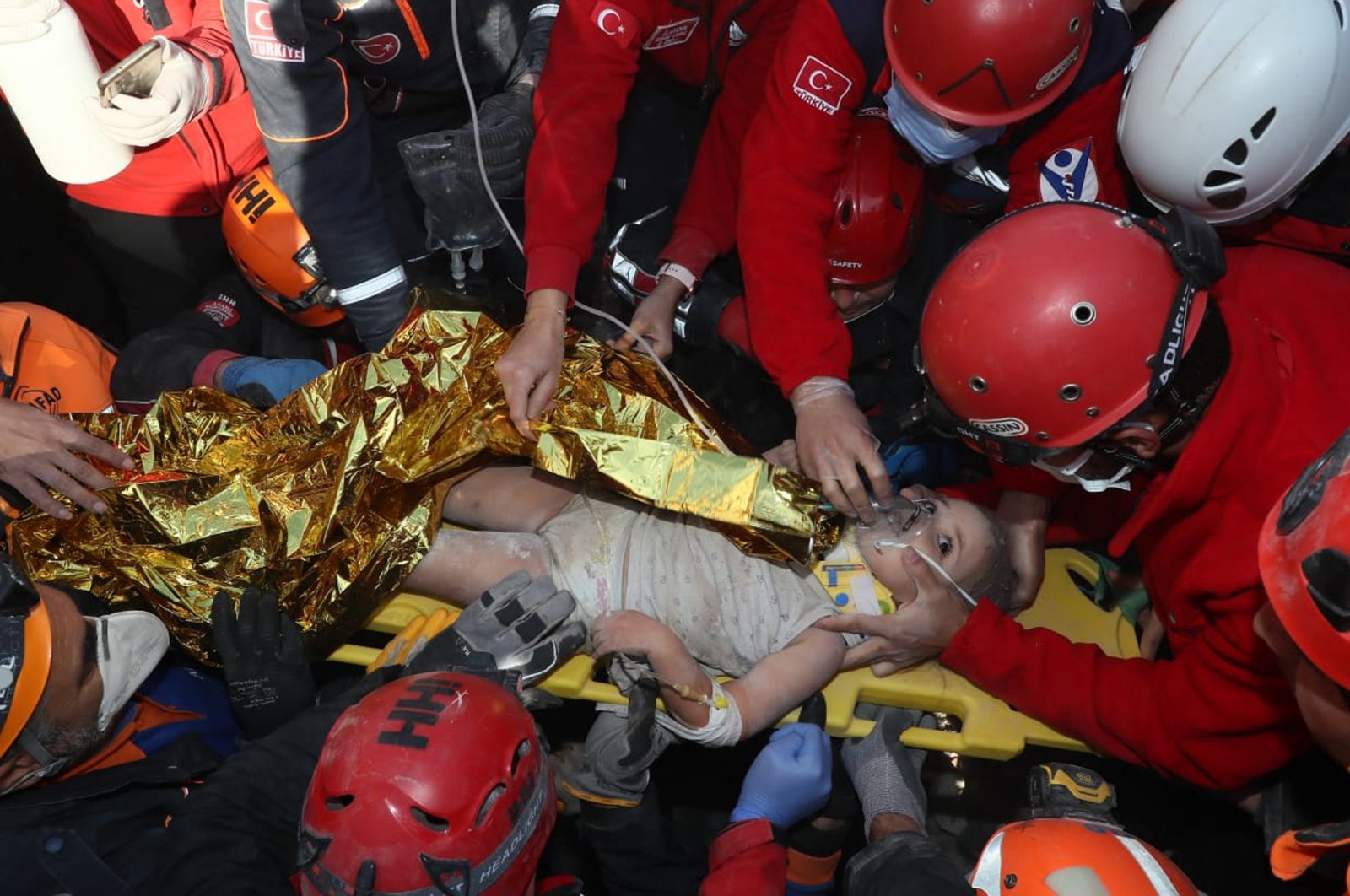 Just as hope faded over the fate of people trapped under the rubble after last Friday’s earthquake in western Turkey's Izmir, another "miracle" rescue took place Tuesday. Ayda Gezgin, a 3-year-old girl, was pulled out alive from the debris of a collapsed building.

The good news came a day after Elif Perinçek, another 3-year-old girl, was rescued.

As the death toll crossed 100, the rescue was branded as "miraculous" by media outlets. Search and rescue efforts continued after the latest rescue while authorities announced dozens of buildings would be demolished due to heavy damage from the earthquake.

Gezgin was discovered when rescuers heard her screams from under the rubble. She was covered in dust but otherwise unhurt when she was pulled amid the applause of rescue workers.

"She smiled, she was waiting for us," Levent Onur, one of the rescue workers pulling Ayda out told reporters at the scene, adding that the child had been stuck behind a dishwasher which shielded her from injury. Her mother Fidan was found dead. Deputy Health Minister Muhammet Güven told reporters at the hospital, where she was being treated, that the child was in good health and receiving treatment.

Nusret Aksoy was among Ayda's rescuers. The rescue worker recounted his first dialogue with the young girl to reporters. "When we shouted toward her direction, she said her name and said she was fine. She then asked for her father. When we asked what she wanted to eat, she said she wanted ayran (a yogurt-based drink)," he said.

Ayda’s discovery was another "miracle." Rescue workers continuously listened to the spot where she was found on Monday night but failed to hear any sound. They believe the young girl had fallen asleep. The girl was found in the kitchen of their collapsed flat. Luckily, she was trapped in the gap between a refrigerator and dishwasher that toppled on each other.

Cem Erdoğan, who was among Ayda's rescuers, was photographed kissing the girl as she was pulled from the rubble. "I was feeling like I found a missing child of mine," Erdoğan, who heads a branch of the Disaster and Emergency Management Authority (AFAD) in the eastern province of Tunceli, told reporters at the scene. Atıl Hepçorman, another AFAD worker who helped rescue Ayda, said the young girl was playing with a magnet that fell off the refrigerator when they found her.

The young girl was the 107th person rescued from the rubble of buildings and became a symbol of grief and hope for a nation mourning the quake victims. When the rescue workers recounted that Ayda asked for meatballs and ayran, while she was being taken to the hospital, people from all around the country called restaurants near the hospital to buy her the dish.

The death toll from the 6.6-magnitude earthquake rose to 109 as of Tuesday while 138 out of 1,036 people injured in the disaster continued to receive treatment. The search and rescue efforts are continuing in four out of the 17 buildings that collapsed, most of them in the worst-hit Bayraklı district of the province.

The authorities announced Tuesday that 124 buildings were heavily damaged in the earthquake while 119 others suffered "medium" damages and 730 were "slightly" damaged. The 124 heavily damaged buildings will be "immediately demolished," the Environment and Urban Planning Ministry announced on Twitter on Tuesday.

On Monday, nine suspects, mostly contractors and construction inspectors, were detained over the collapse of buildings. Experts blamed the collapse on poor construction and modifications made to the buildings to expand them, which eventually weakened the foundation. Though Turkey implemented new regulations in the early 2000s mandating construction that can withstand disasters, the collapsed buildings were built before the regulations came into force. Media reports say the buildings were inhabited despite multiple risk assessment reports by local municipalities indicating the danger.

Murat Akın, deputy director of the General Directorate of Structural Works of the Ministry of Environment and Urban Planning, said they will examine some 100,000 buildings in the Bayraklı and Bornova districts to see if they are under risk. Akın told Anadolu Agency (AA) on Tuesday that the ministry's crews were in the area, taking samples from buildings to assess the risk.

Though the material damage is heavy, the earthquake took a worse toll on survivors who lost their loved ones or homes and are traumatized. For rescuers, who have worked day and night since day one, the survival of victims is the only solace.

Arif Emre Nayman lost both his parents in the earthquake. "We lived there for six years. My mother, father, and I were there (home) during the earthquake. They were lost, I'm the only one left," Nayman, a second-year engineering student, told AA on Monday. Sturdier houses need to be built, said Nayman.

"While the houses next door were sturdy, ours was destroyed and very few people escaped from our apartment building," he added. Nayman said he was in his room next to his bed when the tremors struck, and a wall fell on his legs. "Since my torso, arms and head were in a gap, I could call and shout. They found me in two or three hours and got me out," he said.

Macide Kurt lives in one of the four buildings of an apartment complex in Bayraklı where buildings tipped and partially collapsed. She was in a nearby building, visiting her pregnant daughter when the earthquake struck. "It violently shook us, almost throwing us towards the wall," she recounted the moments of horror at the seventh-floor flat she was in. "I was only thinking about my daughter when the tremors struck. I was in the hall during the earthquake. When the tremors ended, I took my daughter and her children and we ran downstairs. Then, I remembered that the oven was on and ran back to turn it off so there wouldn’t be a fire. I then returned downstairs," she recalled. "Thank God, my family is safe but we feel sorry for our neighbors. My husband’s cousin also died in the earthquake. I am crying every day," she said.

Oktay Acar was in the bathroom when the earthquake hit. "I couldn't open the door at first. When the tremor stopped, I went to the balcony. I saw three floors below our flat were gone," he recounted. Acar and his family survived the earthquake and they rushed to help their neighbors. "We have no losses but we are still here," he said outside the rubble of the nearby buildings. "We are here to share the grief of victims," he added.

Within hours, the rubble was swarmed with rescue workers hailing from all across Turkey. Some were AFAD teams, like the one led by Cem Erdoğan, who also helped rescue Ayda Gezgin. Erdoğan’s crew rescued four people from an apartment building tipped over to its side. With the aid of cranes, the building was saved from total collapse while crews risked their lives to extract four survivors from inside. Sixty-two-year-old Halim Sarı, who was rescued 26 hours after the disaster, was one of them. "We found the first survivor in two hours. Then, we pulled two more people but the building was sliding. Uncle Halim was next. His leg was stuck under a fallen column. We talked to him for 10 hours to keep him awake," he said, recounting the rescue work to AA. Sarı died of his injuries on Tuesday.

"You have to take risks to save lives. These people become a family for us when we work on the rescue. You cannot leave without them. It is very emotional when you hear the voice of a survivor under the rubble. We never felt tired for all those hours. On the contrary, we were joyous because we saved people," he said. When the crew reached the elderly man, he was in a tight space and it was difficult to pull him out. "But then, something happened and we felt stronger. It was something different. You can’t pull someone from such a tight space no matter how much power you exert," said Erdoğan.