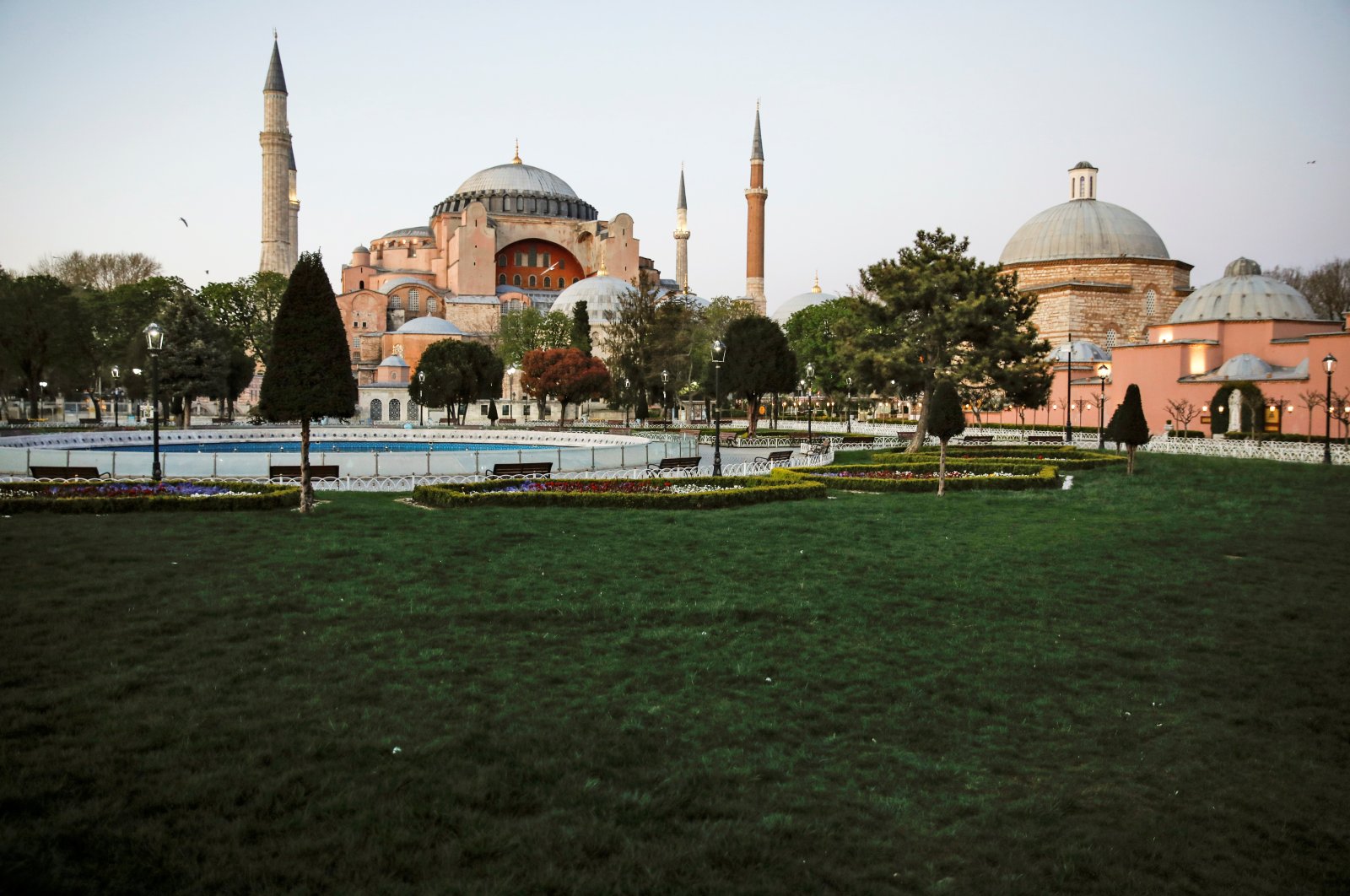 A wide shot of a deserted Sultanahmet Square with the Byzantine-era monument of Hagia Sophia in the background on the first day of the holy month of Ramadan during a four-day curfew imposed to prevent the spread of the coronavirus, Istanbul, Turkey, April 24, 2020. (Reuters Photo)
by DAILY SABAH Jun 13, 2020 10:33 pm
RECOMMENDED

The Armenian patriarch of Turkey, Sahak II, has joined the discussion over the potential re-transformation of Hagia Sofia into a mosque, voicing his support for the proposal in a chain of tweets on Saturday.

“Hagia Sophia should be opened to worship,” he said, stating that it is big enough for that purpose while suggesting a space for Christians. “Let the world applaud our religious peace and maturity. May Hagia Sophia become a symbol of the peace of humanity in our era.”

Patriarch Sahak II further stated that humanity was praying for such unity and so suggested sharing the dome of Hagia Sophia. “Even though our faiths are different, don’t we believe in the same God?”

Having been a place of worship for Christians for 1,000 years and for another 500 for Muslims, he claims that Hagia Sophia could naturally be transitioned into a place of joint worship.

“Hagia Sophia was built through the labor of 10,000 workers at an astronomical cost,” Sahak II said, pointing out that numerous repairs over the past 1,500 years and the endowment of Ottoman Sultan Mehmed II the Conqueror aimed to preserve the iconic building as a place of worship, not just as a museum.

He said it would be more fitting as a place of worship where believers could kneel down in prayer in awe of the structure, rather than a touristic site full of visitors rushing around.

Hagia Sophia, one of the world’s most significant historical and cultural heritage sites, was built in the sixth century at the time of the Christian Byzantine Empire and served as the seat of the Greek Orthodox Church. It was converted into an imperial mosque following the Ottoman conquest of Istanbul in 1453. The structure was converted into a museum in 1935 during Turkey's period of strictly secular single-party rule. However, in the time since, there has been much discussion over converting it back into a mosque, with public demand to restore it as a place of worship gaining traction on social media.

The issue of Hagia Sophia has recently led to tension between Turkey and Greece.

Athens spoke out against the proposal to open Hagia Sophia for worship, but Turkish authorities, including President Recep Tayyip Erdoğan and Foreign Minister Mevlüt Çavuşoğlu, said the decision was a domestic issue for Turkey and did not concern Athens.

"Greece is not the one administrating this land, so it should avoid making such remarks," Erdoğan said.

Meanwhile, Çavuşoğlu criticized Greece for comments on the matter, as he said the Greek government should not be talking about minority rights and religious freedoms when Athens was "consistently violating" such principles.

Ankara has not yet shared details about Hagia Sophia's opening for worship, but the government is under no local or international legal obligations claiming to bar such a move.