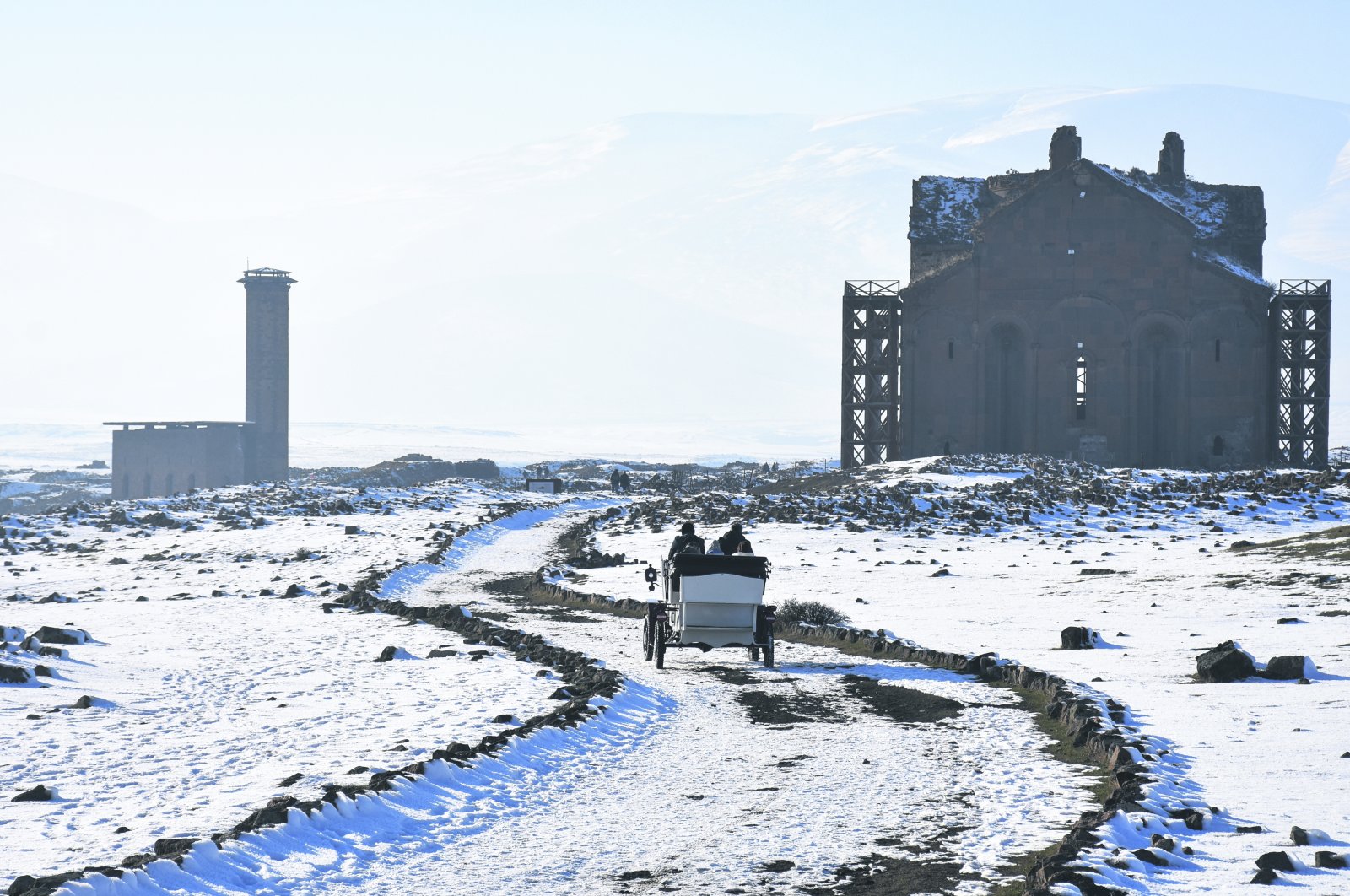 People ride an electric carriage through a snow-covered path near the ruins of Ani, in Kars, eastern Turkey, Dec. 6, 2021. (AA PHOTO)
by DAILY SABAH WITH AGENCIES Dec 06, 2021 1:57 pm
RECOMMENDED

A cold front has taken hold in Turkey’s eastern regions, where the winter is particularly harsh compared to other regions due to its climate. From Erzurum to Kars, temperatures slipping to zero degrees and below, as well as thick fog, disrupt daily life.

Though cold weather was present over the past week, it reached its peak over the past two days, when the raging waters of streams froze, streets were covered with a thick layer of ice and icicles emerged from the eaves of roofs.

Snowfall accompanying the weather gave amateur and professional photographers an opportunity to capture the white beauty. For motorists, however, it was another matter. They rushed to protect their cars parked outside using primitive methods. Some covered the engine hood with blankets while others preferred thick rugs. In Erzurum and Ardahan, the thick fog in the early hours of Monday challenged drivers. Authorities, in the meantime, warned pedestrians to be careful about icicles precariously dangling from eaves.

The lowest temperature was recorded overnight in Ardahan, which is among the coldest places in the country, at minus 16 degrees Celsius (3.2 degrees Fahrenheit). Ağrı in easternmost Turkey recorded minus 13 degrees Celsius. Half of Lake Çıldır in Ardahan, a popular destination, was entirely frozen on Monday while a hydroelectric power plant suffered from freezing temperatures that stopped the flow of water.

Turkish State Meteorological Service (TSMS) warned that dense snowfall is forecast for most of eastern Turkey on Wednesday, including in Hakkari, Muş, Bitlis, Ardahan, Van, Erzurum, Ağrı, Kars and Bingöl. Snowfall is also predicted for Bayburt and Gümüşhane located in the eastern and southern parts of Black Sea region. Snowfall will continue into Thursday.