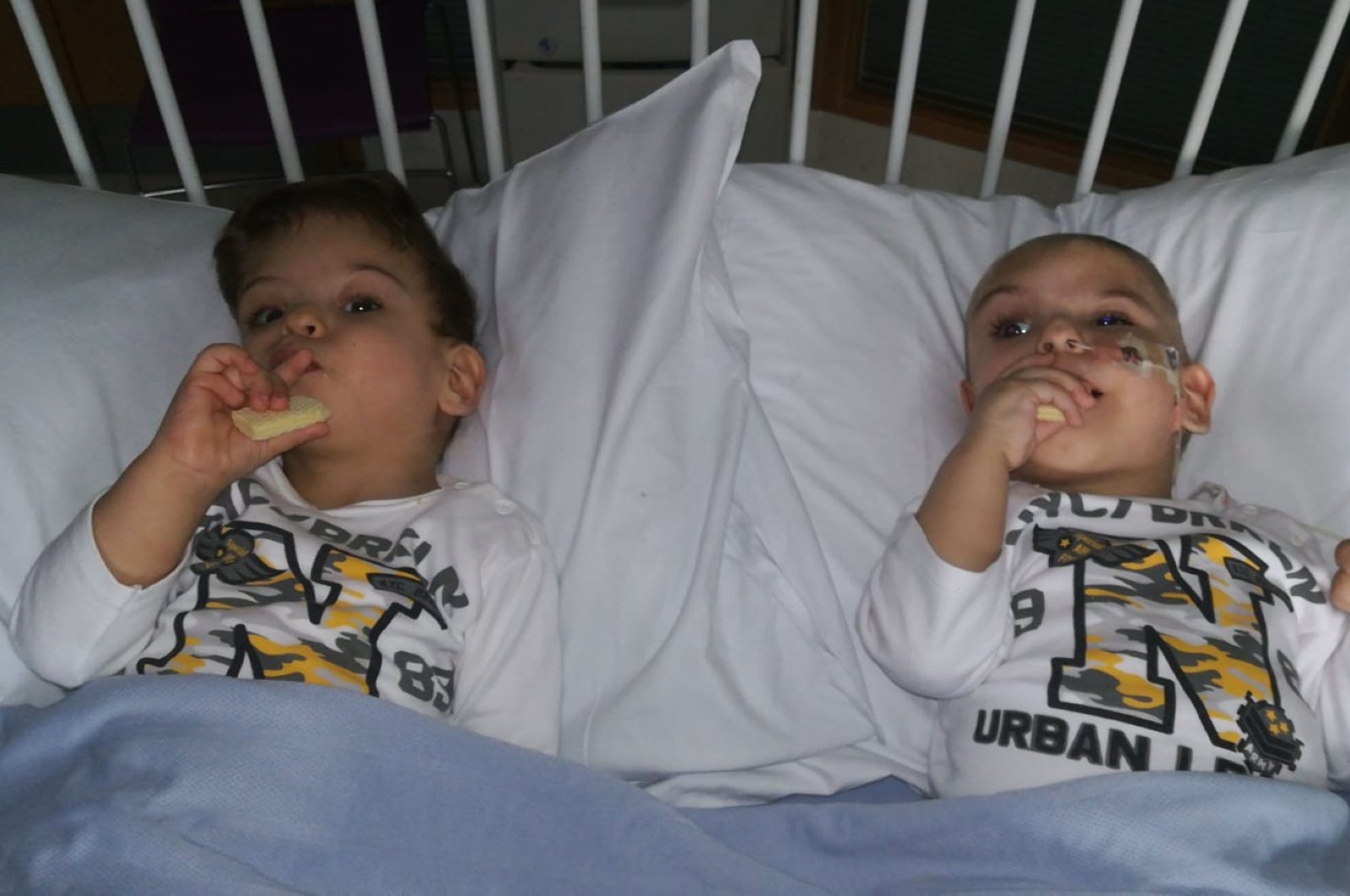 The twins lie on a hospital bed after their surgery in this undated photo. (İHA Photo)
by DAILY SABAH Jun 09, 2020 3:16 pm
RECOMMENDED

A helping hand from Turkish President Recep Tayyip Erdoğan made a dream come true for the parents of two conjoined twins. The 2-year-olds formerly conjoined at the head were operated on in the United Kingdom and successfully separated this January. Following post-surgical treatment, the pair now look forward to coming home.

Derman and Yiğit Evrensel were born and raised in the Mediterranean city of Antalya, where their family tried with no luck to find a treatment for the rare defect.

When their story was published by state-run Anadolu Agency last year, Erdoğan intervened personally given the limited means for such a procedure in Turkey, arranging for the family to take the twins to the U.K. where a hospital specialized in the operation is located.

After Turkish doctors contacted their counterparts in London's Great Ormond Street Hospital, the pair were taken to the U.K. on board the Health Ministry’s air ambulance last year.

After three surgeries by a team including two Turkish doctors and famed neurosurgeon Noor ul Owase Jeelani, the twins were finally separated on Jan. 28. Since then, they were being monitored and undergoing further treatment at the British hospital. They will return to Turkey on Wednesday.

Father Ömer Evrensel told Anadolu Agency that they were delighted the state intervened to provide for the surgery. “If President Erdoğan and his wife Emine Erdoğan had not stepped in to help us and if it wasn’t for Health Ministry, we could never have had them separated. Our country has stood with us throughout this difficult process,” he told AA on Tuesday.

“When I saw them separated, I burst into tears. This was our only dream. Now they can play, do whatever they want like their peers,” Evrensel said. Their mother, Fatma, said when the boys were conjoined they were constantly bumping into things trying to crawl. “I could never leave them for a second, but I also couldn’t hug them or cradle them. I am overjoyed that their agony is over,” she said.

Erdoğan said on Monday that Turkey would cover the cost of the twins' surgery and treatment, but doctors operating on twins and a Turkish businessman living in the U.K. agreed to lend money from their own pockets for the surgery upon hearing of Turkey’s mobilization for their recovery.