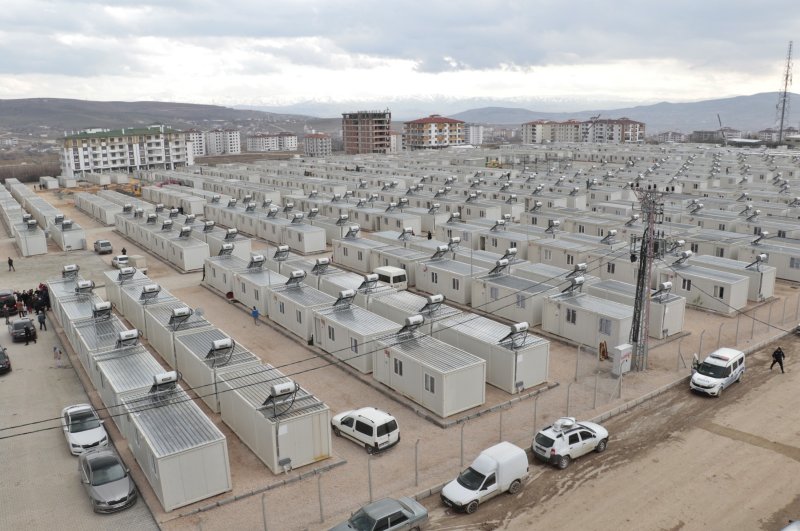 Some 500 survivors moved in to the prefabricated units over the past few days. (DHA Photo)
by DAILY SABAH Feb 25, 2020 3:48 pm
RECOMMENDED

Exactly one month after a 6.8 magnitude earthquake hit the eastern Turkish province of Elazığ, survivors started moving to a “container city,” a new settlement composed of prefabricated housing units resembling shipping containers. Some 500 survivors who lost their homes have already moved in while the Disaster and Emergency Management Presidency (AFAD) provided furniture and other household items for families.

The earthquake on Jan. 24 killed 41 people and destroyed hundreds of homes. Tents were initially sent to survivors, and the government announced the construction of new houses expected to be built by the end of this year. For the interim period, AFAD started installing 4,806 prefabricated houses in four neighborhoods and one village in Elazığ. Some 900 housing units were already installed, and 500 were ready for accommodation.

Yunus Koç, who moved in a prefabricated house with his wife and four children, thanked the state for the swift aid. “The state took good care of our family. This new container is fine and clean and definitely better than having to live in a tent,” he told Demirören News Agency (DHA).

Musa Tağgür, who moved into his new home with his wife, said their house was heavily damaged in the earthquake, and for 20 days, they either stayed in a tent or with a relative. “I am very happy. We went through bad times, but now I am grateful to the government for giving us this place,” he said.

The government announced last month that 200 apartments in 10 blocks will be constructed at first to cover the accommodation needs in the earthquake zone. Reconstruction efforts will not only cover central Elazığ but also the surrounding villages where smaller houses, mostly those made of adobe bricks, will be replaced with sturdier structures.