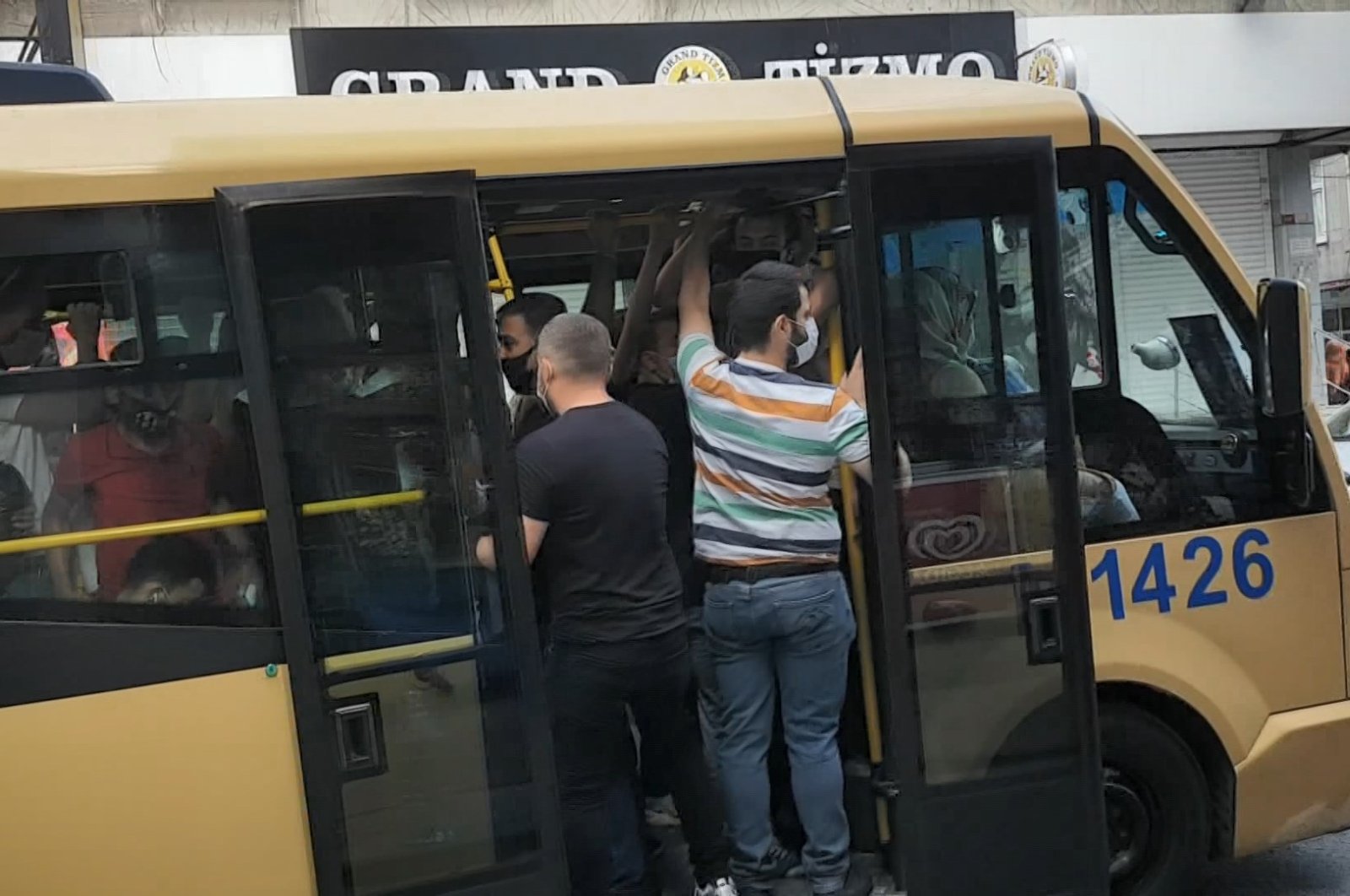 Turkey’s struggle against the coronavirus outbreak encounters obstacles despite relative success. Overcrowded places remain a fertile ground for infection while authorities strive to end the scenes of people too close to each other and occasionally, without protective masks.

Nationwide, send-off ceremonies for conscripts, a popular custom, pose a risk while it is private-run minibuses crammed with passengers which threatens the fight against infections in Istanbul, the country’s most populated city which long had the highest number of new cases.

Since the beginning of the week, governorates in at least a dozen cities, including Istanbul and the capital Ankara, announced restrictions to send-off ceremonies.

The ceremonies involve a large crowd of people, usually youth, converging on main streets to form convoys. Convoys disrupting traffic then head to bus stations to see off conscripts. Occasionally, the crowds engage in dancing in the streets in dangerously close quarters, despite the ongoing threat of the pandemic. Photos and videos published online and by media outlets show most people ditching masks and social distancing rules during the informal ceremonies. Health Minister Fahrettin Koca often shares these photos on his social media account and warns against them. Pandemic task forces set up in each province ordered the ceremonies to be held without spectacle, especially without convoys. Only relatives of the conscripts will attend the ceremonies. In Istanbul, conscripts are required to sign an agreement that the ceremonies will not violate social distancing and mask requirements.

In Istanbul, police face a tough task of monitoring crammed passenger minibuses especially during rush hours. Minibuses are the only option for commuters especially in short routes and routes where buses do not operate frequently. Thus, before the pandemic, they were always brimming with passengers, sometimes grabbing each other in order not to fall from open doors. Curfews and restrictions relatively ended those scenes, but as Turkey has gradually started introducing the normalization process in the past two months, overcrowded minibuses are back. Police squads chase and fine drivers, but not a day passes without the news of minibus drivers caught red-handed while carrying passengers higher than the capacity of the minibus. In the city’s Küçükçekmece and Esenyurt districts, it is common to see people holding onto each other in packed minibuses. Despite increased inspections, drivers manage to evade police most of the time. In some cases, they drop off passengers before their destination when noticing police checkpoints. Police started employing drones to track overcrowded minibuses especially travelling in narrow alleys. Engin Arslan, a passenger who was forced to leave the minibus when the driver evacuated it upon seeing police inspecting other vehicles, told Demirören News Agency (DHA) on Wednesday that drivers communicate with each other to warn others about checkpoints and did not refund them though they were forced to get off before their destination.

Turkey on Tuesday registered 1,053 coronavirus infections in the past 24 hours, marking the eighth day in a row that new cases have been falling, albeit slightly.

The country's confirmed caseload now stands at 207,897, according to the latest Health Ministry data.

Some 1,152 patients are currently treated in intensive care units (ICUs), while 400 are on ventilators.

"Our intensive care occupancy rates have stayed between 59%-61% for a month. We are taking in as many new patients as the number of patients we discharge. The situation is similar for intubation," Minister Fahrettin Koca said in a tweet.

The Interior Ministry ordered the governorates of 81 provinces in Turkey to launch mass inspections Wednesday. Simultaneous inspections by security forces aim to bolster enforcement of rules like the compulsory wearing of masks and social distancing. Most provinces have a mask requirement in place for all residents going out, while authorities often warn people to adhere to social distancing in busy venues. Not wearing masks is punishable with a fine of TL 900 ($131), but despite constant patrolling by security forces, people not wearing masks are common sights in many cities.