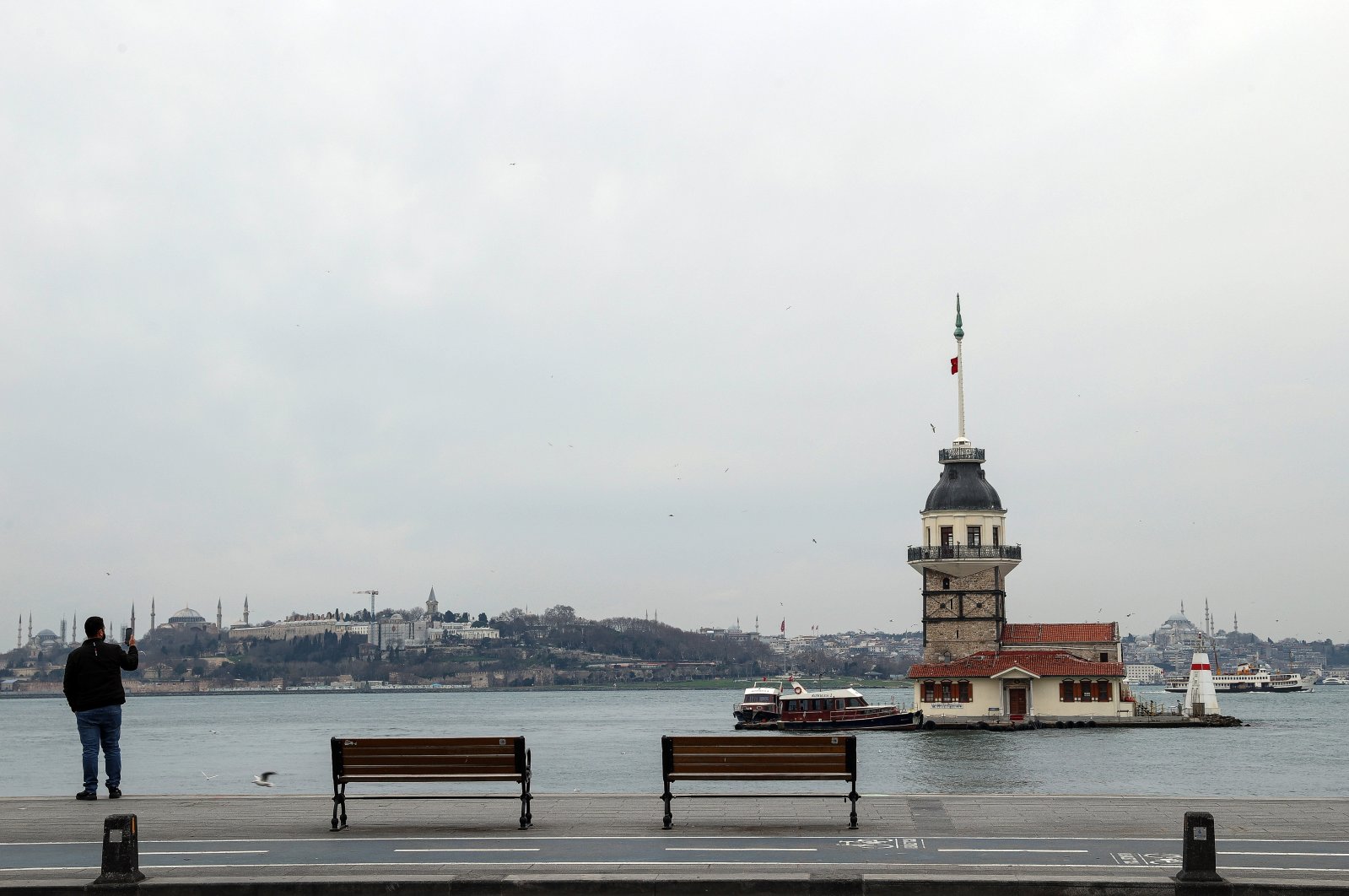 Benches stand empty on the Üsküdar waterfront by the Bosporus with the Maiden Tower and the city's historic peninsula in the background during a weekend curfew, on Jan. 16, 2021. (AA Photo)
by DAILY SABAH WITH AGENCIES Jan 16, 2021 8:30 pm
RECOMMENDED

The decreasing trend in the second wave of the COVID-19 outbreak in Turkey resumed on Saturday as the Health Ministry reported over 7,500 new coronavirus cases, down from 8,314 registered the previous day.

A total of 7,550 cases, including 902 symptomatic patients, were confirmed across the country, the data showed. Turkey's overall case tally has crossed 2.38 million. The nationwide death toll hit 23,832, with 168 fatalities over the past day.

The latest figure shows that the number of COVID-19 patients in critical condition dropped to 2,265.

Since December 2019, the COVID-19 pandemic has claimed more than 2.01 million lives in 191 countries and regions.

Over 94.07 million cases have been reported worldwide, with recoveries now over 51.84 million, according to figures compiled by the U.S.' Johns Hopkins University.

The U.S., India and Brazil remain the worst-hit countries in terms of the number of cases.

On Thursday, Turkey kicked off a mass COVID-vaccination campaign with health care workers being the first to get the jab.

The Health Ministry announced on Saturday over 650,000 health care workers in the country have received the first doses of a COVID-19 vaccine. On Wednesday, Health Minister Fahrettin Koca became the first person to receive the China-based Sinovac's jab in the country after Turkey's official drug and medical equipment body TITCK approved CoronaVac for emergency use. President Recep Tayyip Erdoğan and many political party leaders were also vaccinated on Thursday.

The first batch of 3 million doses of the COVID-19 vaccine developed by China's Sinovac arrived in Turkey on Dec. 30. Amid a fierce race for vaccine supply, Turkey remains among the fastest countries in mass vaccination; however, experts state that some 50 million to 55 million people out of a population of 83 million need to be vaccinated or develop immunity against Sars-CoV-19 for a full return to normal.

Since last month, Turkey has been imposing curfews on both weeknights and weekends as part of its efforts to curb the virus's spread.

Across the Mediterranean, the Turkish Republic of Northern Cyprus (TRNC) will start implementing a nighttime curfew starting Sunday that will last for a week, due to a recent uptick in COVID-19 cases.

Following an extraordinary Cabinet meeting, Prime Minister Ersan Saner announced Saturday that new measures are being implemented as daily cases have reached the 30 mark, out of a population of over 320,000.

Saner stated that the curfews will be in effect from 10 p.m. to 5 a.m., starting Jan. 17 and ending Jan. 25. The winter recess in elementary and secondary schools was also extended from Jan. 18 to Jan. 22, and the nation's Epidemics Higher Board will evaluate the same day whether to resume education as of Jan. 25.

Vaccinations in the TRNC also began Thursday with 20,000 doses dispatched from Turkey and applied to health care workers. Saner had stated that they aim to vaccinate some 250,000 people.