COVID-19 pandemic: 1st weekend without restrictions in Turkey since April 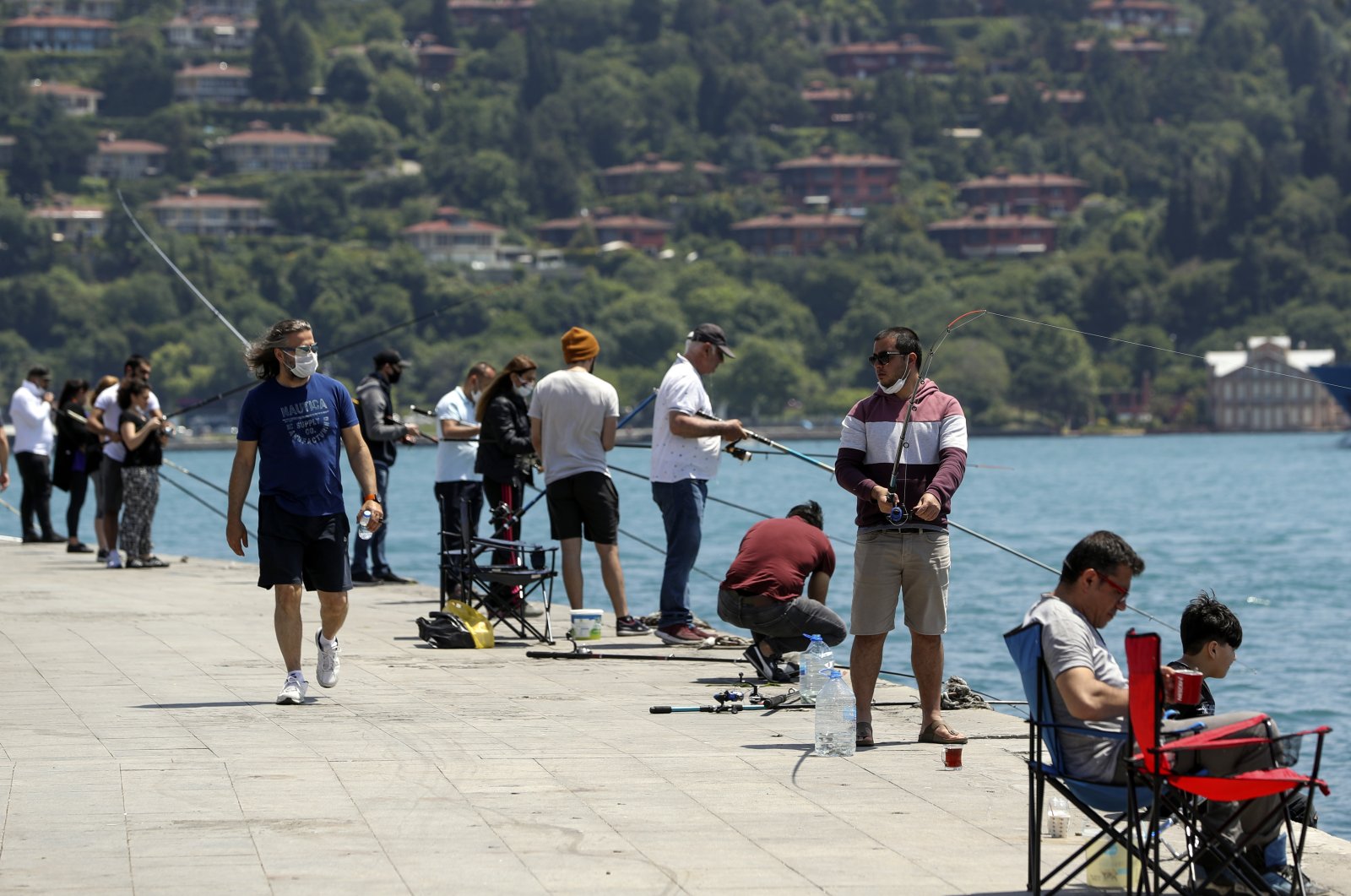 Some went fishing, others for a walk and some preferred simply watching the scenic Bosporus on the first weekend without a curfew, Istanbul, Turkey, June 7, 2020. (AA Photo)
by DAILY SABAH WITH AGENCIES Jun 07, 2020 1:02 pm

Weekend excursions were a reality again for millions living in big cities in Turkey as the country, for the first time in months, lifted weekend curfews related to the COVID-19 pandemic. Crowds flocked to resort towns, shores, parks and promenades

Big cities are alive again with the sounds of radiant citizens, who stepped out of their homes on a hot weekend, for the first time since mid-April. People streamed outside on Saturday and Sunday for their first weekend without a coronavirus lockdown after President Recep Tayyip Erdoğan on Friday ordered the lifting of the weekend curfew announced late Thursday. Most people heeded Erdoğan and others’ calls for wearing masks while outside and keeping their social distance.

As COVID-19 cases showed a decline, Turkey has introduced a gradual normalization process. Starting from June 1, cafes, restaurants and similar facilities were reopened in big cities where cases steadily increased since March. Domestic flights and intercity travel were also resumed after restrictions were lifted.

In Istanbul, where the majority of cases are concentrated, people enjoyed a sunny weekend, flooding beaches and esplanades while others preferred parks, resting under trees, exercising or having picnics. Though they had to wear masks which restricted movement, people made the most of their days off under new rules which also require them to keep a distance from others. Yet, returning to weekends also meant long traffic snarls for millions, who had to wait for hours in unforgiving heat in traffic to reach popular destinations.

"The last time I was here was 70 days ago," said Gülay Çevik, a housewife in Istanbul who was fishing in the Eminönü district. "I would always come here to fish, but since the outbreak, we've had to protect ourselves a bit. But I really missed it,” she told Reuters.

Cevdet Akaydan, a 23-year-old public servant, was out swimming with his friends along the shore in western Istanbul.

"It's really nice, very clean and cool right now, it relaxes you," he said. "Everyone should come, and go in. ... You can't explain it, you have to experience it."

"You really get giddy like a child. It's lockdown, lockdown, lockdown," said Cem Pehlivan, a textile worker fishing in Istanbul. "Now I feel really good, I'm comfortable, and the weather's fine." In the city’s Sarıyer coast, one of the most scenic destinations, joggers, walkers and people riding bicycles filled the lanes in the early hours of Sunday. It was a relief for people who rarely left their houses except for grocery shopping and other needs or had to spend the end of the working week confined to home since the pandemic made its foray into Turkey in March. “It is good to be outside again,” Ahmet Yaser Müslümanoğlu, who heads one of the busiest hospitals in Istanbul, told Demirören News Agency (DHA) on Sunday. Müslümanoğlu, the chief physician at Bağcılar Training and Research Hospital in the eponymous district, was among those running along the Bosporus shore. “Our hospital received more than 30,000 patients in three months and had more than 4,000 COVID-19 patients. Thankfully, the number of cases decreased. It was hard to stay at home or the hospital. I wore my mask and went out again. We also have to be careful about social distancing and hand hygiene. I think Turkey is doing well against the pandemic. It is good that the curfew is lifted so people will have their inner peace and have higher morale,” he said.

Turkey on Saturday confirmed over 1,922 more recoveries, with 80% of all patients recovering from the coronavirus nationwide, Health Minister Fahrettin Koca said.

The total number of recoveries from the disease has reached 135,322, Koca said on Twitter.

"The majority of patients who tested positive recovered from the disease without symptoms and at home," he said.

"A total of 41 patients were sent to hospitals due to COVID-19 across all 81 provinces," the minister added.

Health care professionals conducted 35,846 tests for the virus in the past 24 hours, raising the total number to more than 2.3 million. According to the test results, the total number of COVID-19 cases in the country reached 169,218 with 878 new infections. Currently, some 264 patients are being treated in intensive care, the ministry data showed.

Speaking at an event on Saturday, Erdoğan said Turkey had “many reasons to look into the future with hope.” “We have goals beyond recovery of our losses due to measures against the pandemic,” an optimistic Erdoğan said, highlighting that there have not been obstacles in health services, food and hygiene products supplies and public order during the pandemic. He said Turkey was implementing a normalization schedule without concessions on health and step by step. “Complying with rules of wearing a mask, adhering to social distance and hygiene rules, we are returning daily life to its normal rhythm,” Erdoğan said, reiterating his call to the public to follow those rules.

Koca also repeated his calls to the public to follow the rules with stinging tweets accompanied by photos of people ignoring social distancing or wearing masks. His latest target was amateur fishers standing dangerously close to each other on Istanbul’s Galata Bridge. Sharing a photo of mingling fishermen, Koca wrote, “Fishermen adhered to social distancing only with fish.” In another tweet on Saturday, Koca shared a video of people dancing on the Caddebostan coast without caring about social distancing. “People celebrate the final recovery from COVID-19 and success in defeating the pandemic. This is not the caption for this video. We should not ‘normalize’ too much and adhere to mask and social distancing rules,” Koca tweeted.