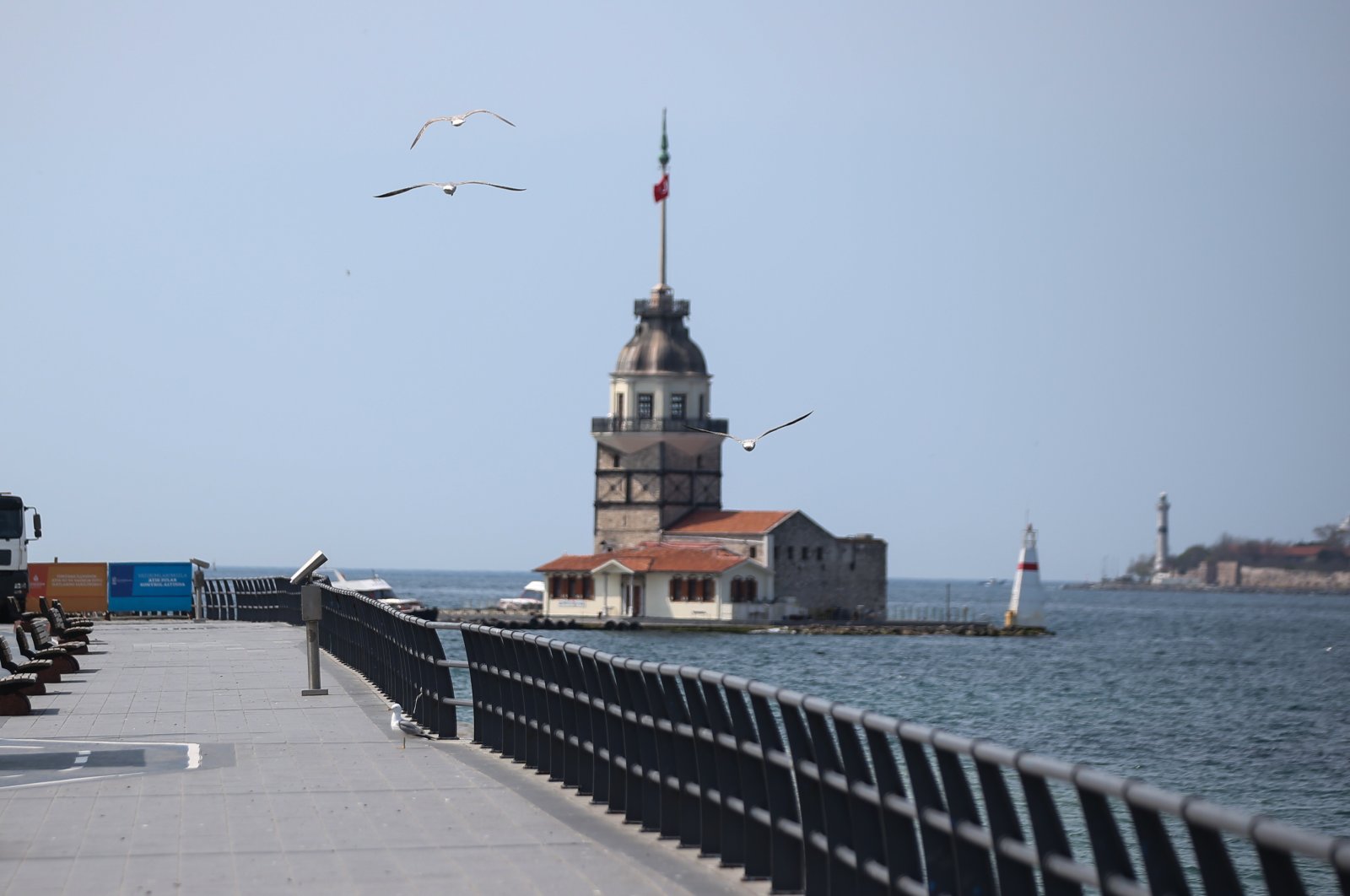 An empty Salacak esplanade against the backdrop of the iconic Maiden's Tower during a curfew, in Istanbul, Turkey, April 26, 2020. (AA Photo)
by DAILY SABAH WITH AGENCIES Apr 26, 2020 1:44 pm

The number of recoveries from COVID-19 exceeded new cases on Saturday, as Turkey begins planning to return to the good old days with the aid of an “immunity” map as a guiding light for normalization

Turkish authorities have always been cautiously optimistic when it comes to combatting the COVID-19 pandemic, with caution taking precedent over optimism for the most part. Since the first case was reported in March, Turkey has repeatedly called its citizens to stick to social distancing and self-isolation measures. This has been apparently useful as the tally of patients who recovered from coronavirus on Saturday exceeded fresh cases.

Daily recoveries stood at 3,845, while new infections totaled 2,861, said Health Minister Fahrettin Koca in a tweet. "The number of discharged people from hospitals is 984 more than the number of new patients," he added.

The rare good news comes in the footsteps of media reports that the country is planning to map out the state of immunity across the country, in order to plan when and how to lift restrictions on daily life.

Koca says the trend of positive tests is also falling and urges the public to follow lockdown measures.

So far, a total of 25,582 patients have been discharged from hospitals after recovering from the virus since the start of the outbreak, according to the minister. The death toll from the virus in Turkey stands at 2,706, with 107,773 cases. At least 38,308 tests were conducted over the past 24 hours as of Saturday, with the total reaching 868,565, according to the Health Ministry.

Turkey, meanwhile, plans to roll out “immunity tests” which will serve as beacons to map out a post-pandemic normalization process. Last week, President Recep Tayyip Erdoğan has signaled a potential easing of COVID-19 restrictions after Ramadan Bayram or Eid al-Fitr. The holiday which marks the end of Muslim holy month, which started last Friday. Certainly, it will depend on the trend in cases.

As the death toll rose, Turkey was quick to impose a series of restrictions though it stopped short of a full lockdown as is the case in European countries with far higher number of fatalities. Flights were canceled first, followed by a shutdown of schools, closure of restaurants, bars and other public venues. Senior citizens were ordered to stay indoors, a measure later extended to those below the age of 20. Acting upon the advice of the Health Ministry, the government recently started imposing weekend curfews in big cities, and with the beginning of Ramadan, this was extended to a curfew on the first day of Ramadan and the day prior.

The Sabah daily has reported that the Turkish Statistical Institute (TurkStat) will examine the socioeconomic development status and frequency of cases via a sampling method to create an immunity map. With the nationwide initiative, Turkey hopes to join other countries that have managed to control the outbreak and resumed daily life. One formula is prioritizing a return to work for those who have recovered from the disease and undergone an immunity test.

TurkStat will examine 10,000 households and those families will be asked to give nasal and throat swab tests. The institute plans to enroll an army of health care staff, even including dentists, to complete the process quickly. One of the most distinctive features of coronavirus is that, in the majority of cases, patients are asymptomatic. This causes an acceleration in spreading the virus.

TurkStat’s survey will help to determine asymptomatic cases who recovered without knowing that they had coronavirus and those who developed an immunity. It will give authorities insight into the immunity of the nation on a province-by-province basis. Pandemic boards set up in every province will use this data to calculate the virus’s impact and the probability of infections. Thus, each province will decide on which restrictions to lift and to what extent. For instance, the tourism season will resume in the popular Mediterranean province of Antalya if the immunity rate is improved. TurkStat survey will also help fight against the pandemic, allowing authorities to run more extensive test programs in provinces with a higher rate of immunity and encourage the citizens there to donate plasma for complementary plasma therapy currently in use.

Normalization will start in strategic sectors from food and agriculture to manufacturing. However, though there will still be restrictions such as wearing masks, adherence to social distancing, etc., along with the option of multiple shifts to prevent a crowded workspace and examining the body temperature of the staff.

More than 60,000 Turkish citizens have been evacuated from foreign countries where they were stranded due to the coronavirus lockdown.

"We have brought over 60,000 citizens to our country so far," Foreign Minister Mevlüt Çavuşoğlu said in a tweet. "We also enabled nearly 20,000 foreigners in Turkey to return to their countries," he added. The top diplomat went on to say Ankara has dispatched medical equipment to 57 countries.

Turkey has also sent an ambulance plane to bring home one of its citizens who was denied treatment in Sweden after testing positive for the coronavirus, Koca said Sunday.

Koca ordered an ambulance airplane to bring Emrullah Gülüşken, 47, together with his four children back home from Malmo after Gülüşken’s daughter Leyla appealed to the government to bring back her father to Turkey.

"Dear Leyla, we heard your cry. Our ambulance airplane is taking off at 6 a.m. and we're coming to Sweden," Koca said in a Twitter message, saying that the hospitals and doctors in Turkey are ready to treat her father.

Koca continued by extending the president's and the Turkish public's warm wishes to Gülüşken's daughter, who sought the country's help to save her father. Gülüşken's daughters Leyla and Samira shared a video on social media about their father's situation and asked for help.

She said after her father experienced fever and shortness of breath, she called hospitals but did not receive a return call.

Turkey's embassy in Stockholm and the Presidency for Turks Abroad and Related Communities (YTB) contacted the family and Koca talked to the younger Gülüşken.

"After a doctor came home and checked my father, he called the ambulance and asked to be taken to the hospital. After being hospitalized, he was diagnosed with the COVID-19. Despite this, they sent my father back home," she told Anadolu Agency earlier.

Leyla Gülüşken said on Sunday that Turkey was “the only country which could do that.” “I am worried because of my father’s situation, but I also feel relaxed because he is going back to his country, to be in safe hands. I know he will be cared for better there,” she said.