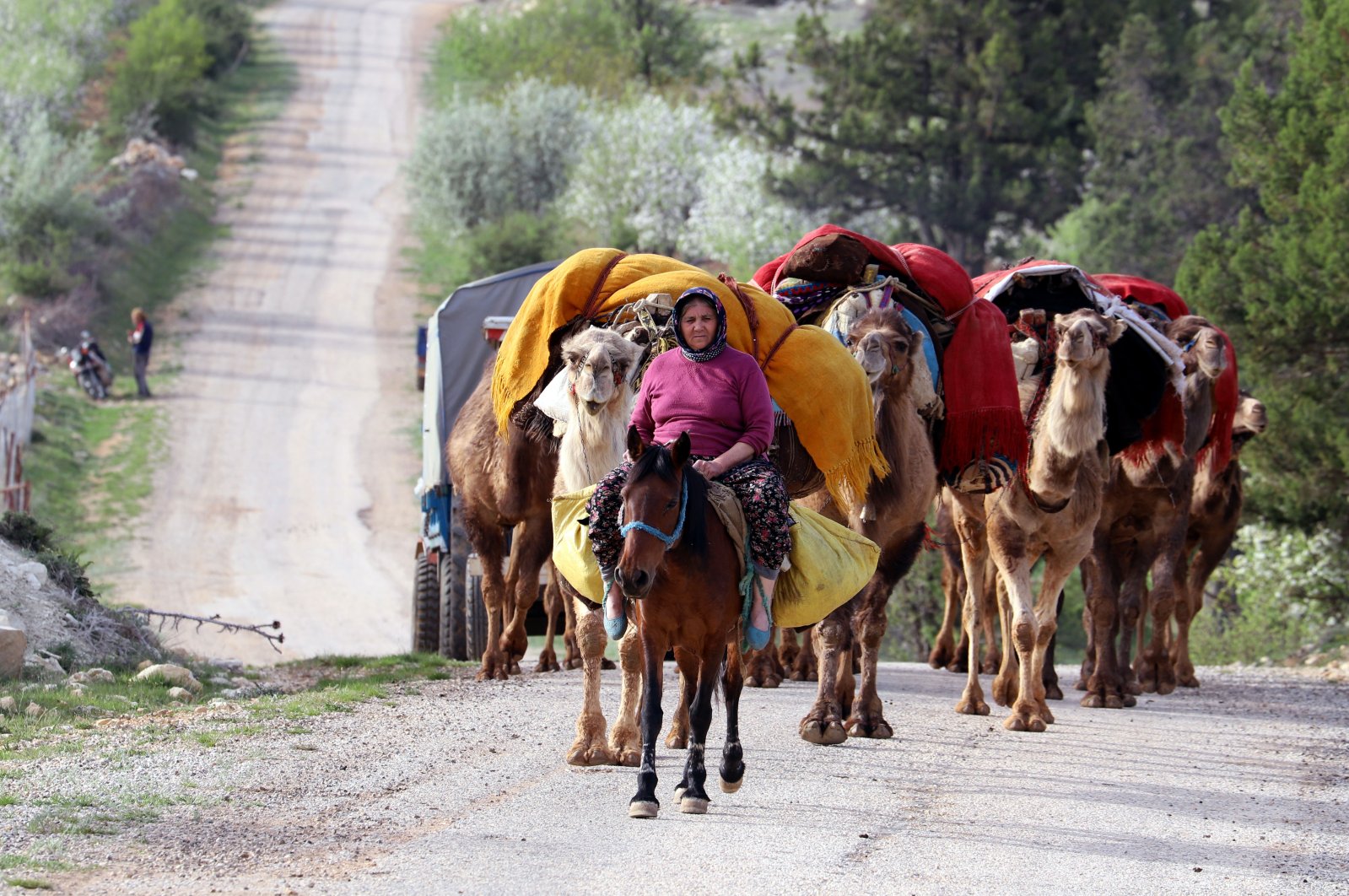 Nomads and their flock head to cooler plateaus in the Konya and Karaman districts for the summer season, Mersin, Turkey, May 4, 2021. (DHA Photo)
by DAILY SABAH WITH AA May 07, 2021 12:18 pm
RECOMMENDED

Life is cyclical for Turkey's nomads, also known as Yörüks, as they head back to the beginning every year when the sun starts to shine over southern Turkey. Following a 1,000-year tradition, they move to the cooler plateaus dotted throughout the mountains with their herds of goats, camels and horses.

One group of Turkish nomads, among the last representatives of the nomadic lifestyle of Anatolia, continues their traditional journey with camels and horses, despite the rapidly changing world around them.

The Sarıkeçili Yörüks spend the winter in southern Mersin province, which has a temperate climate, and migrate to central Konya and southern Karaman provinces to pass the hot summer months on their cool plateaus.

Before the journey, the Yörüks get ready by dismantling their tents and preparing food to eat while traveling. They make cheese from the goats they graze, cook flatbreads on their stoves and load their belongings onto camels.

During their journey through the foothills of the Taurus Mountains, the Yörüks control their goat herds, sometimes with horses and sometimes on foot.

Families who choose to rest on the high-altitude plains during the tough migration set up their tents again and spend the night there.

Hatice Uçar, 61, is one of the Yörüks who took the road to Konya from Mersin’s Gülnar district. She leads the camel herd on a horse, while her husband Ali Uçar, 63, carries water tanks with a tractor. Their 23-year-old daughter Fatma and her 24-year-old husband Mustafa Dilekmen are responsible for the transport and grazing of the goat herd.

“We come across challenges on the road. It is difficult, not easy,” Hatice told Anadolu Agency (AA) in a forest area near Karaman province.

“We pass through vineyards and orchards with difficulty. There are seedlings in some places and crops in some places,” she said, adding they are cautious not to harm people’s crops.

Noting that now the camels are used to her, she said: “Once I go before them, they follow me. They come after me thinking that ‘she is taking me to the plateau.'”

Migration is difficult, but they earn their bread, she said, adding that she is happy despite the hardship.

“I was born, grew up and lived in such mountains. We haven't seen any other place,” she said, adding it is getting harder to travel as she gets older.

Fatma Dilekmen said the hardest part is the preparation process.

“We will have a migration that will take 20-25 days. In the meantime, we made our preparations in advance in order not to struggle on the road.”

Happy to be a nomad, Dilekmen said they are headed to Konya’s Hadim district and are living the life they were born into despite the advancements of technology.

She said sometimes they take breaks during their travels when there are suitable areas.