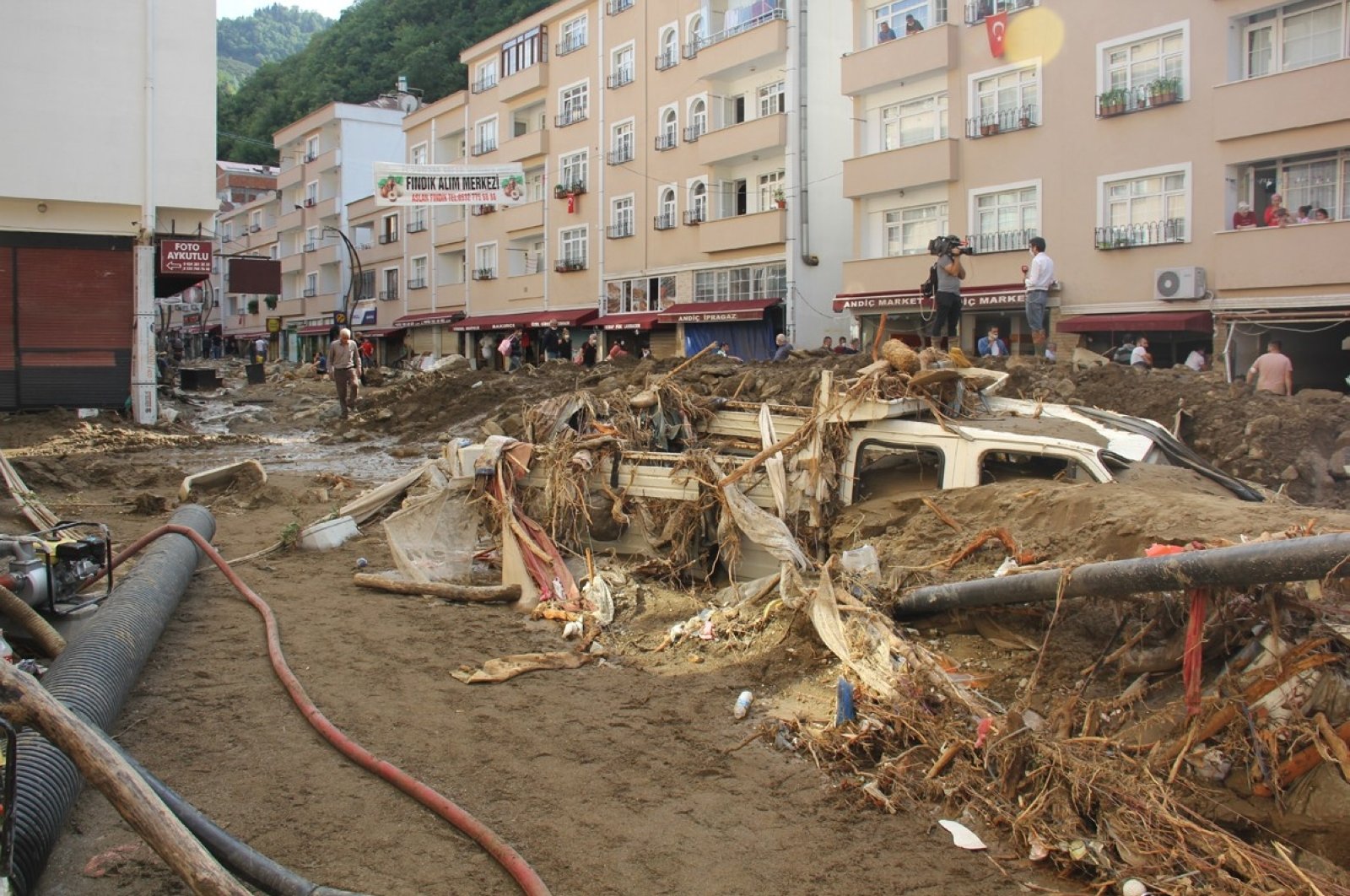 Turkey is mourning the losses from Sunday's devastating floods that hit the country's northern provinces, while officials scale the destruction left behind.

The death toll rose to eight on Monday while search and rescue efforts are underway to find eight missing people, including military officers.

Dereli, a district of Giresun, a Black Sea province famed for its hazelnuts, was among the worst affected as a torrential downpour triggered floods that swept away people, cars and everything else in its path. Houses and shops were left buried in mud and debris from the unprecedented disaster, which is tied to excessive rainfall, the worst in recent memory.

On Monday morning, crews recovered the body of a military officer, the seventh victim of the tragedy. The officer was inside a van sent to the area to help victims when a five-meter (16-foot) culvert the vehicle was parked on collapsed due to floodwaters.

Interior Minister Süleyman Soylu, who visited Giresun on Sunday to supervise search and rescue work, said additional crews had arrived from nearby cities and they had expanded the search area for those missing in the Güce and Dereli districts.

After talking to locals, the minister told journalists, "We are trying to learn from this bitter experience, how and why it happened and what steps we should take to prevent a repeat of this."

"Every disaster, every disaster-hit area has its own characteristics, so, we cannot implement a draft solution without insight into these characteristics. We are hearing people’s demands and will base our roadmap on what to do next to heal their wounds,” Soylu said.

Soylu said crews were examining the damage to residential buildings and businesses.

Officials say floods cannot be prevented entirely due to the Black Sea region’s mountainous geography where flatlands for construction are scarce and the growing population craves housing development and occasionally turn to river beds for the solution.

"It is impossible to completely stop these floods in the Black Sea region, where more than 120,000 streams exist. It doesn’t matter if you are a world superpower or a great state, there is simply no way. We need to learn to protect ourselves first," Agriculture and Forestry Minister Bekir Pakdemirli, who visited the flood-hit areas on Sunday, said.

Pakdemirli also blamed global warming for causing such violent and sometimes unpredictable weather patterns. "This was not the first, and it won’t be the last. We will see similar disasters. What we need to do is listen to warnings from authorities and take the necessary precautions. We believe citizens should cooperate more with local authorities," he said.

Yusuf Demir from the Faculty of Agriculture at Ondokuz Mayıs University in Samsun, another Black Sea province, links the torrential rains and unprecedented floods to rising seawater temperatures. "Global climate change and the uncontrolled intervention of nature in the Black Sea region played a role in recent flood disasters," he told İhlas News Agency (İHA) Monday.

He added that the impact of drought was moving from the south to the north and fallout from the onset of continental climate has been more visible in the region in recent years. "Climate change aggravated vaporization and this causes flash floods and rains. It manifests itself either in floods or drought. Uncontrolled development in river beds and insufficient rehabilitation of lands also spoil nature and pave the way for such disasters. We see more vaporization of seawater from the Black Sea and a weather pattern stemming from this phenomenon that moves toward the mountainous areas," he warned.