Death toll rises to seven in floods in northern Turkey 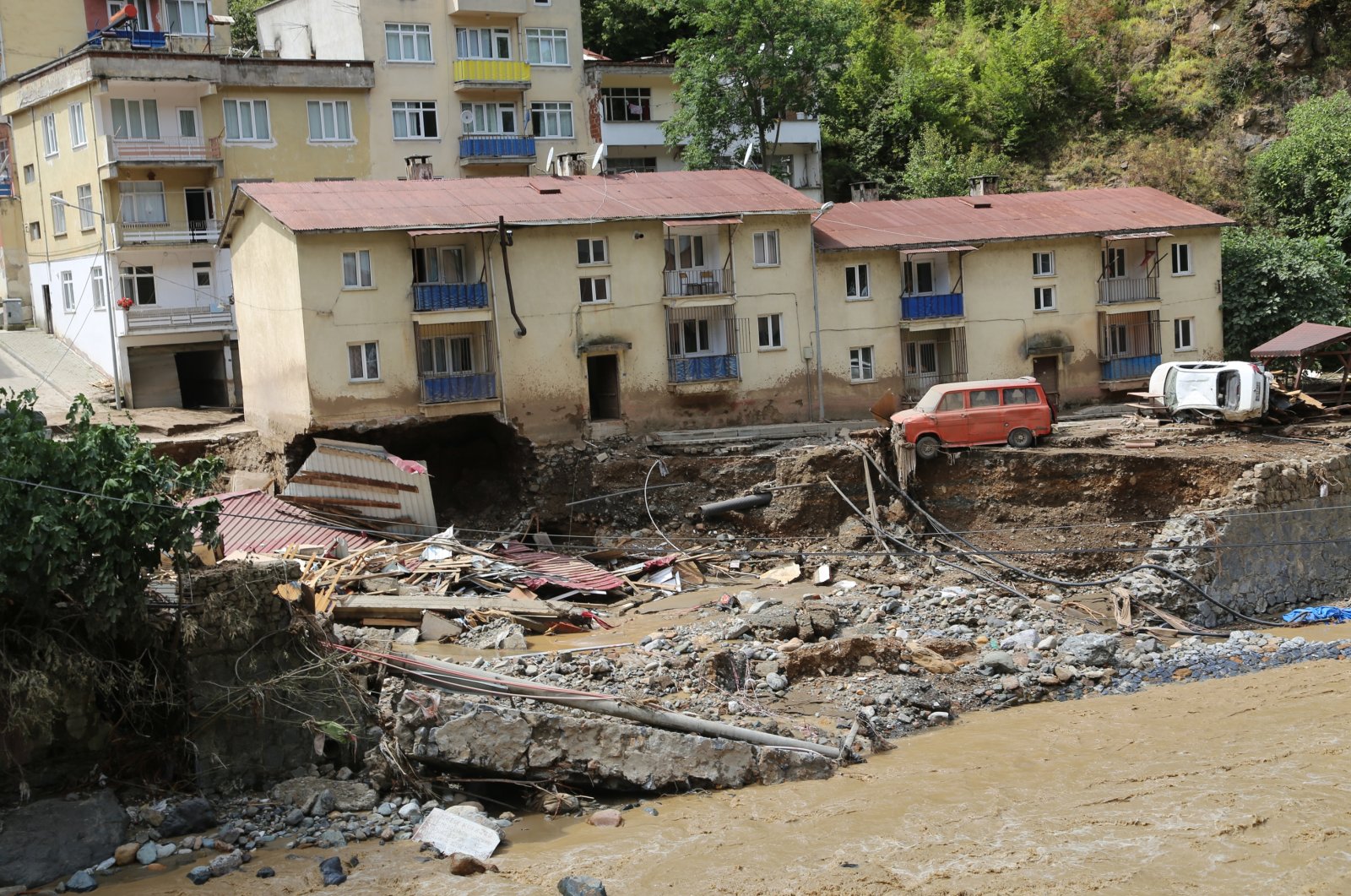 Search and rescue crews are looking for nine missing in Sunday's flash floods in the northern province of Giresun as death toll rose to seven on Monday. Body of a military officer went missing during rescue efforts was discovered in the morning. Flash floods sent torrents of water roaring across Giresun, wreaking havoc particularly in Dereli district.

A total of 153 people have been saved from the deluge so far.

Speaking to reporters after inspecting the affected areas with Agriculture and Forestry Minister Bekir Pakdemirli, Interior Minister Süleyman Soylu initially reported 133 people had been rescued, with a wide-scale operation still underway to find the missing, or any others. The number of rescued was later revised by President Recep Tayyip Erdoğan to 150 when he also said 12 people were injured in the floods.

Erdoğan also offered condolences to families of those who lost their lives in the floods.

Construction equipment was already deployed at the scene to clear a path for rescuers, Soylu said, adding that an aerial operation was also considered if all else fails.

Describing the situation in Giresun, Soylu said he had never witnessed such destruction.

“But I have to say, I don't think our mayor, members of Parliament or I have ever witnessed such scenes before. May God protect us from such disasters. Most of the shops are filled with debris or soil up to the ceiling,” he said.

“I have seen earthquakes, but this is something else. I wouldn’t wish this on my enemy. I want to extend my condolences to everyone in Dereli and Giresun once again.”

“I have worked during many natural disasters, but this is the first time I am witnessing such a flood. It completely changed the city’s silhouette,” the minister said, adding that earth moved by the floods has increased the ground level at Dereli by 2 to 3 meters.

While Pakdemirli said the losses were tragic, he also criticized citizens for ignoring advance warnings from authorities.

“I am sorry to say but so many times we have witnessed our citizens ignoring repeated warnings from authorities, thinking they will be fine, that it won’t affect them. This, unfortunately, leads to loss of life every now and then,” he said.

The minister said the government would do everything it can to ensure such scenes would not occur again, explaining that an expansive project to protect the eastern Black Sea region from floods has already started. But he still warned that the floods were ultimately impossible to stop due to the region’s geography.

“It is impossible to completely stop these floods in the Black Sea region, where more than 120,000 streams exist. It doesn’t matter if you are a world superpower or a great state, there is simply no way. We need to learn to protect ourselves first,” Pakdemirli said.

Pakdemirli also blamed global warming for causing such violent and sometimes unpredictable weather patterns. “This was not the first, and it won’t be the last. We will see similar disasters. What we need to do is listen to warnings from authorities and take the necessary precautions. We believe citizens should cooperate more with local authorities,” he said.

As the sun rose and the level of destruction became clearer, many across the country began offering their condolences.

In close contact with Soylu and Pakdemirli throughout the day, Erdoğan was one of the first to offer condolences to those who were affected in Giresun. The president offered his condolences once again in a speech he made during a ceremony yesterday.

Foreign Minister Mevlüt Çavuşoğlu and Youth and Sports Minister Muharrem Kasapoğlu were among other top-ranking officials who extended their sympathy to the locals.

“We pray for our citizens and the gendarmerie officer who passed away in the disaster that occurred in Giresun. Our government has mobilized to help those affected and will do everything it can to prevent such tragedies in the future. We stand with our citizens,” Çavuşoğlu wrote.