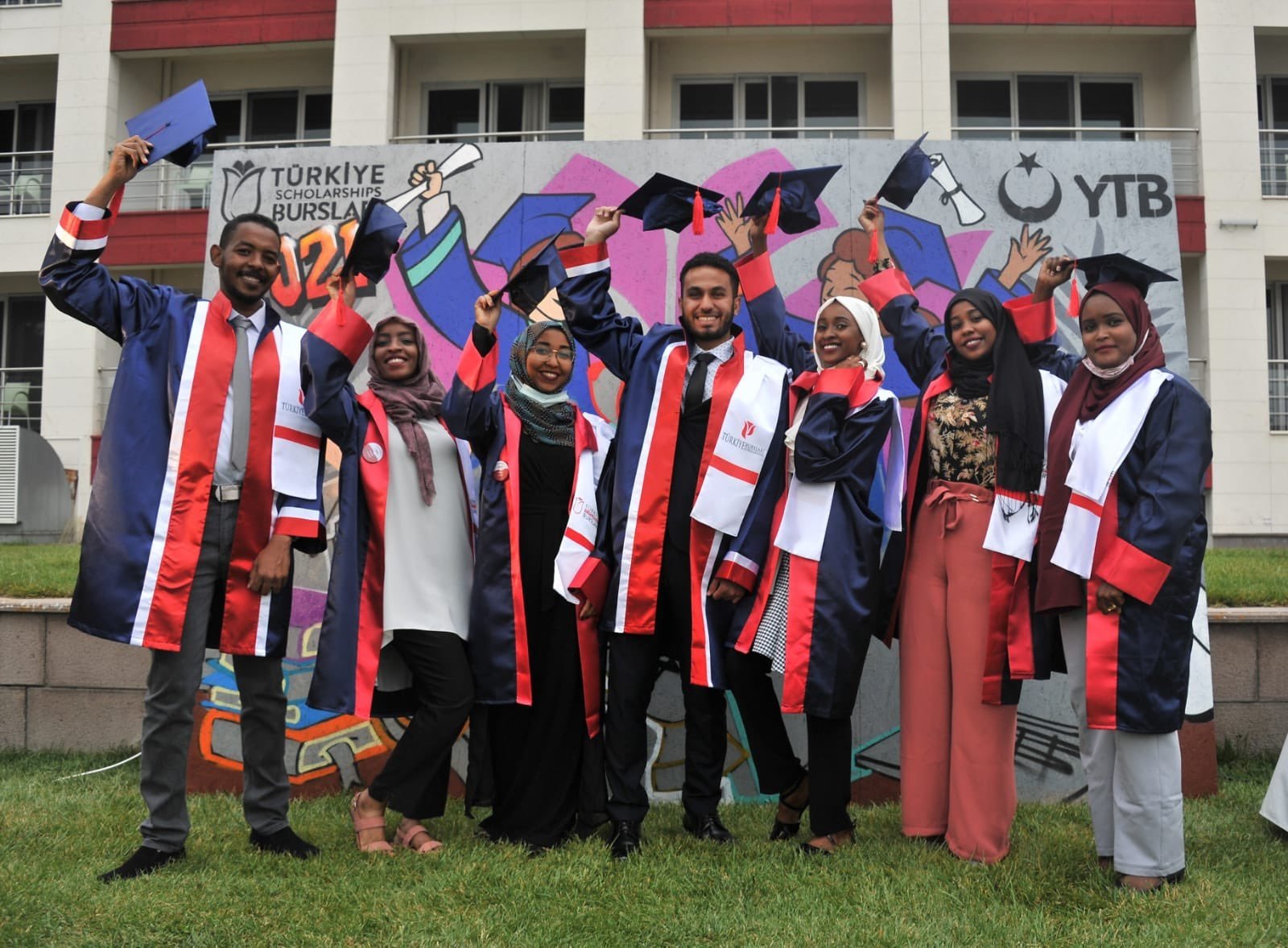 Türkiye Scholarships students celebrate graduation on the sidelines of a ceremony in the capital Ankara, Turkey, July 8, 2021. (COURTESY OF YTB)
by DAILY SABAH Jan 06, 2022 10:14 am
RECOMMENDED

Türkiye Scholarships, the country's biggest scholarship program for international students, launched its application process for 2022. Offered by the Presidency of Turks Abroad and Related Communities (YTB), the government-funded program covers university students and post-graduate researchers. Along with cash aid for students, it gives research opportunities to the applicants, as well as an opportunity to learn about Turkey. Applications for the year 2022 are open from Jan. 10 to Feb. 20, 2022, and submitted online through the scholarship program’s online application system, which is free of charge.

YTB President Abdullah Eren says that students’ interest in the scholarships has been on the rise with each passing year since the onset of the program, which was originally launched in the 1990s under another name, later reformed and transferred to the authority of YTB in 2012.

“Back in 2012, Türkiye Scholarships program received 42,000 applications, while last year it reached a record number of 165,500 applications from 178 different countries. This year, we also aim to set a new record,” said Eren. The institution provides around 5,000 scholarships every year including full-time degrees (bachelor’s, master’s and Ph.D.) as well as short-term programs such as research scholarships and language and culture programs.

Referring to the great interest shown in the program, Eren pointed out that this is due to the wide range of services and programs that the scholarship covers. “It is an all-inclusive program that covers the cost of tuition fees, monthly stipend, accommodation, health expenditures, round-trip flight tickets and a one-year Turkish language course for all students. Hence, it’s one of the world’s most comprehensive scholarship programs.”

The scholarship program is competitive and merit-based, where next to candidates’ academic excellence, additional extra-curricular social and other qualifications are taken into consideration. All awardees are provided with a one-year free-of-charge Turkish language course regardless of their program and academic background, wherein students get the chance to be acquainted with the Turkish culture through a variety of trips and programs provided in their first year, next to learning the Turkish language.

Following graduation, students are initiated into the Turkey Alumni network, which has around 150,000 graduates from more around 156 countries.