Eating with the seasons: All about Turkey's fruit and veggie harvest in the heart of spring 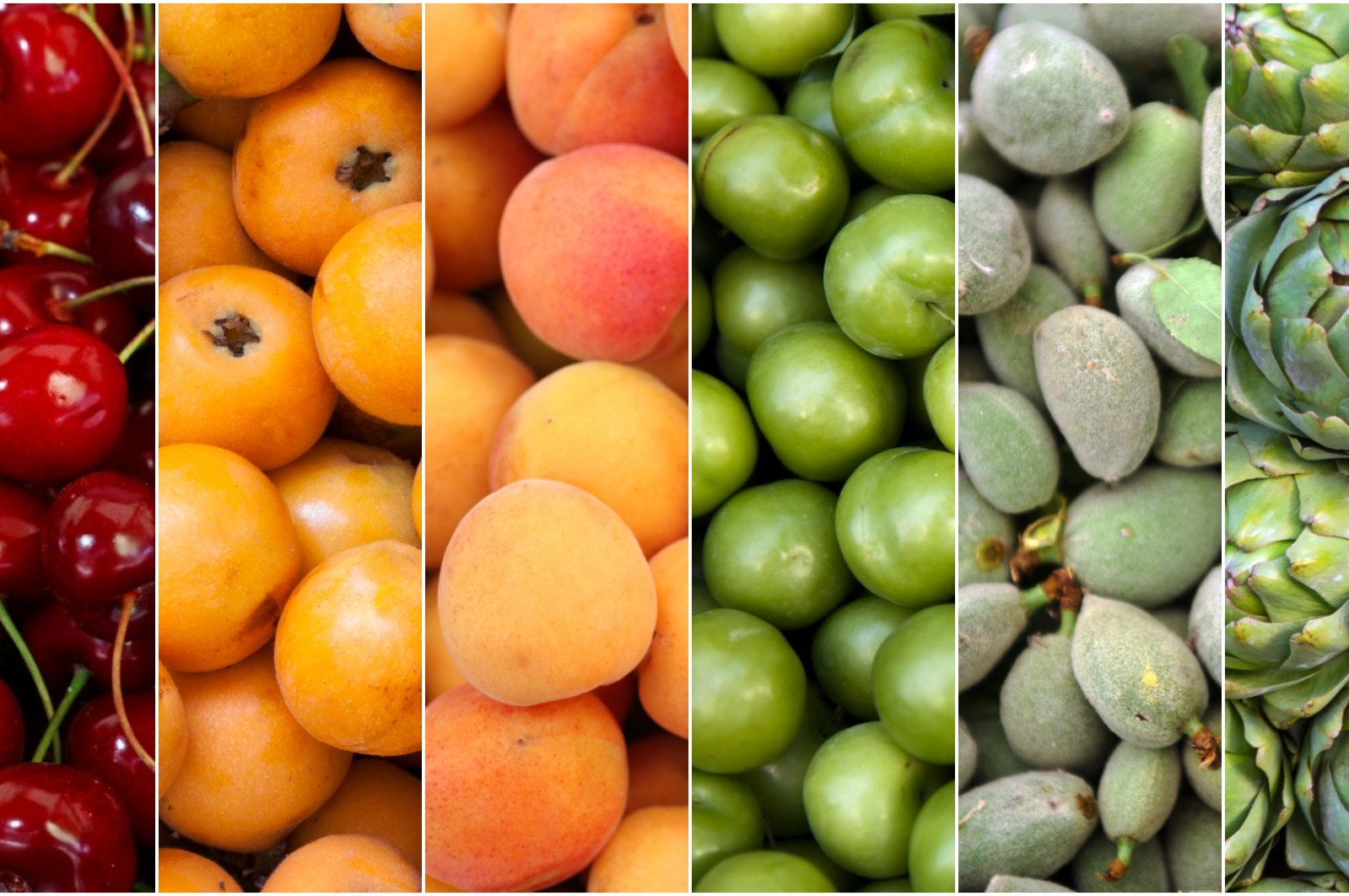 Turkey's spring harvest is certainly a colorful and flavorful one.
by Leyla Yvonne Ergil May 26, 2020 11:50 am

Seasonal produce is without a doubt fresher, tastier and more nutritious than fruits and vegetables consumed out of season. So why not relish in Turkey's fruitful (literally) and colorful spring harvest while learning more about where your favorites come from?

Some of Turkey’s most sought-after and beloved fruits and vegetables are harvested in the spring months leading up to summer. Some familiar and others less well-known, there is a lot to learn and tips to be shared about what’s being offered in produce and farmer’s markets, especially during this time in which eating healthy food is key to our survival.

For many, this month and the next will be the best time of the year to consume favorite fruits such as cherries and apricots and lesser-known delights such as “çağla badem” and “papaz erik.” There will be home-cooked meals of peas picked from their pods and broad beans with skins and all. There is no better time to eat fresh veggies and fruits as we must be diligent about our health during these trying days and try to consume as many nutrients as possible. Luckily, Turkey’s seasonal cuisine means there are specialties for nearly every month and particular regions where the produce is cultivated.

As for cherries, if you are looking for sweet and plump fruits, make sure to stick to purchasing “kiraz,” because this is also the time of harvest for “vişne,” aka black cherries, which are certainly much tarter. Turkey is the world’s top cherry producer and comes in third for the black cherry counterpart, thus, unsurprisingly, there is a wide variety of cherries to choose from. In terms of taste, the most popular variation is the dark ruby Royal Ann Cherry, referred to in Turkey as “Napolyon,” however “Salihli,” another favorite, is plumper and juicier.

Turkey is also the world’s top apricot producer, and while the province of Malatya and its “Şekerpare” variation has been the long-standing favorite, for the aficionado, the apricots from “Iğdır,” located on the outskirts of Mount Ararat, are also top contenders. The “Şekerpare” is the quintessential peach-colored apricot with fuzzy skin and soft sweet flesh, while the Iğdır variation is larger and more oval, lighter in color and can have smooth skin and crispy flesh. The taste when perfectly ripened is definitely out of this world.

The loquat is referred to in Turkish as either “Yeni Dünya,” meaning "new world," or “Malta Eriğı,” which means Maltese plum, but regardless of the confusion, it is clear that this is one of the most popular fruits of spring. The seeds are large and the fruit is small, but the taste when ripened is well worth trying, especially as this is one of the lesser-available finds worldwide and is high in Vitamin A and iron.

The plum is another popular fruit in Turkey with a wide spectrum of variations to offer, including the greengage, which is not only bitter in taste, but the Turks also cover them in salt. Referred to as “Papaz Erik” or “Can Erik,” consuming these small, green, crispy plums is a passion for the Turks. Many expats, however, have been lured into chomping into this fruit assuming there will be a sweet reward only to get a rude awakening as these plums can be as sour as lemons.

Another fine taste of the Turks in spring is the beloved "çağla badem," which is the unripened almond. A specialty, these crispy almonds are removed from their fuzzy green shells and placed on a plate of ice which in normal times you can even see being sold on the beaches and in parks by vendors. They are also one of the highest-priced items in the market.

Beans and peas in a pod

The spring market also offers up a wide variety of vegetables that take center stage in some of Turkey’s most favored meals at this time of year. The highly anticipated snow peas are now available, and the peas themselves are regularly prepared in a tomato-based stew with potatoes, carrots and chunks of meat and is one of the most popular dishes of spring. Broad beans, cooked with onions and dill in their own pods is another family favorite.

The art of the artichoke

The Izmir region and particularly the quaint township of Urla are famed for being the epicenter of artichoke production in Turkey. Not only is there the indigenous “sakız enginarı” variation, but every year with of course the exception of this one, there is a bustling three-day festival devoted solely to the artichoke in which famous chefs and local cooks compete and showcase dishes prepared with this special product. While the “sakız enginarı” is smaller with a more oblong shape, the “Bayrampaşa enginarı” is the more bulbous version we are more familiar with. Keep in mind that the Turks tend to discard the artichoke leaves and will regularly sell the hearts all peeled and cleaned and prepared to be cooked, so make sure to indicate that you want the bulb intact if you were hoping on noshing on the leaves with a dipping sauce.

Take a walk on the wild side

The Aegean region is famed for its leafy wild greens, and the spring season is the best time of the year to both try them and pick them. Turkey’s most famous harvest festival, the Alaçatı Ot Festival, is another multiple-day celebration held in the chic holiday town of Alaçatı in Izmir province, devoted to the region’s healthy wild greens. While there are dozens of different greens traditionally handpicked by local village women that are then cooked in a variety of ways such as in a börek pastry or even sautéed with eggs, there are a few that stand out for their immensely dense nutrients and unique flavor. "Şevketibostan" is one, which in English is referred to as “blessed thistle” and contains thick white roots that are regularly prepared in stews. “Stinging nettle,” aka “ısırgan otu,” is considered one of the healthiest leafy greens out there and is said to have been used for hundreds of years to lower blood pressure and treat inflammation and arthritis. Turks love to treat this green like spinach and prepare it in stews covered with yogurt or as pastry filling coupled with cheese. Beware when purchasing this herb however as the nettles truly can sting until they have been blanched, so make sure to wear gloves when handling them. Another specialty in spring is the surfacing of wild asparagus, referred to as “tilkişen,” which, as the name suggests, grows wild on the outskirts of the Aegean and Mediterranean mountains. With thinner stalks and darker hues, the wild asparagus resembles the cultivated version we are familiar with and shares the same taste, making it a wonderful springtime find to come by.