For the love of Turkey’s Riviera: Bodrum’s famous vacationers 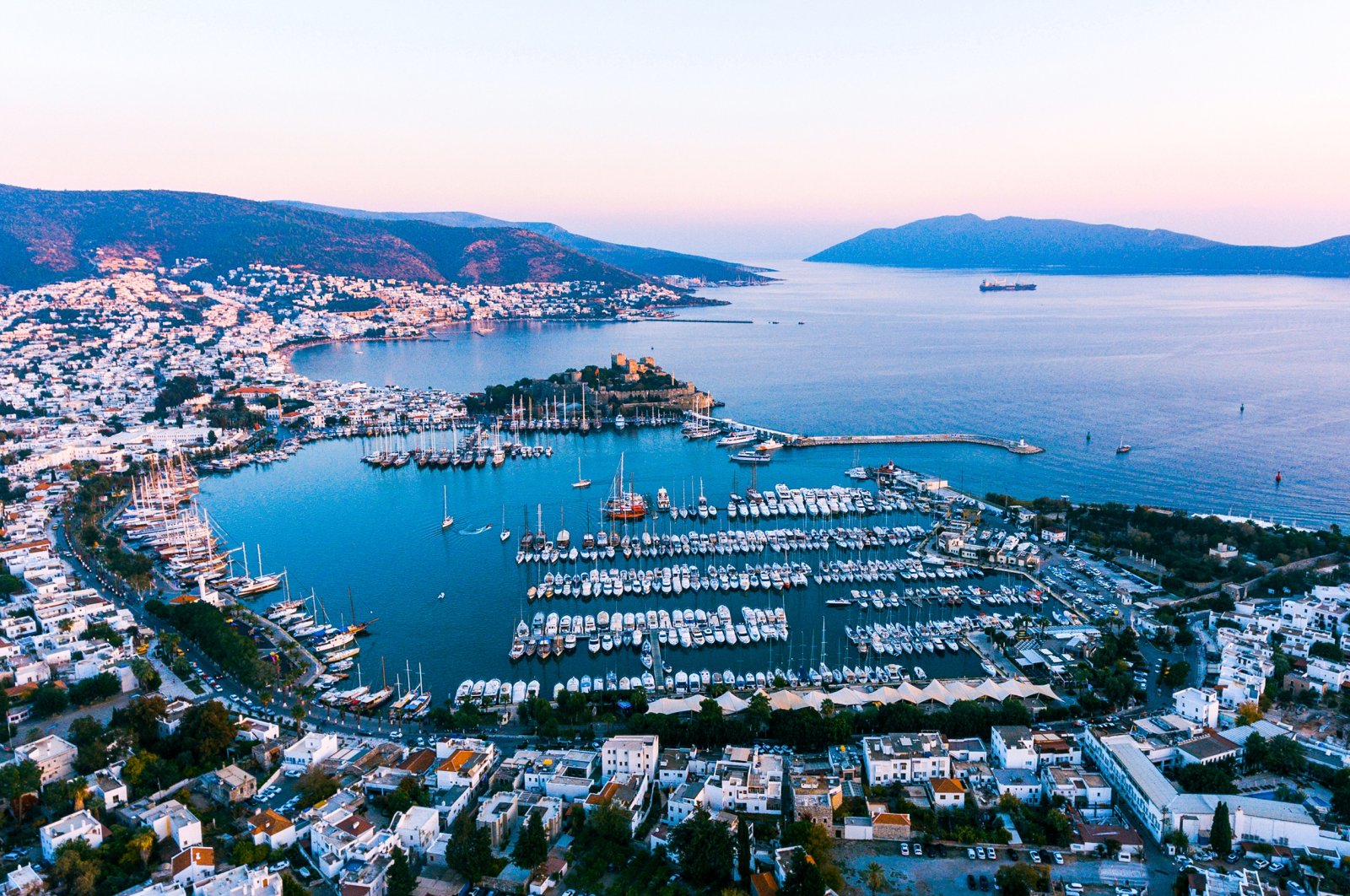 From British royalty to Hollywood A-listers and elite businesspeople, the list of those who come to Bodrum time after time goes on and on. (Shutterstock Photo)
by Leyla Yvonne Ergil Aug 20, 2020 11:25 am
Edited By Yasemin Nicola Sakay

Compared to the likes of St. Tropez and Mykonos, the port city of Bodrum has proved itself a relatively under-the-radar luxury destination for the famed faces of the world, emerging as a hot spot for celebrities, models and the royal elite

A recently released tell-all on the escapades of U.K. royals Prince Harry and Meghan Markle reveals that they spent a secluded vacation in Bodrum in 2017, a year before they were to be wed, which has shown a spotlight on why Turkey is one of the most desirable countries in the world to holiday in. Secretly or not, a number of famous figures have also clued into this fact and have spent significant time in Turkey.

Released just last week, the biography "Finding Freedom: Harry and Meghan and the Making of a Royal Family," which was penned by royal reporters and co-authors Omid Scobie and Carolyn Durand, claims that Prince Harry and Meghan, the Duke and Duchess of Sussex, spent five nights in a private villa overlooking Yalıkavak Bay and its marina in a vacation spent “completely undetected” in the summer of 2017.

This was not the first time Prince Harry has paid a visit to Turkey. In fact, both he and his father Prince Charles famously took part in the centennial celebrations of the Battle of Gallipoli held in Anzac Cove in the western province of Çanakkale in 2015. Ten years earlier, Prince Charles had also attended the 90th year celebrations and the year prior took part in the reopening ceremony of the British Consulate in Istanbul, which had been one of the targets of the devastating 2003 bombings. Most remarkably, however, in 2007, both he and his wife Camilla, the Duchess of Cornwall, arrived in Ankara and went on to travel to Konya to visit the mausoleum of 13th-century Sufi philosopher Mevlana Jalaluddin Rumi. They also traveled to Çatalhöyük to visit the excavations of a 9,000-year-old Neolithic settlement.

This was also not the first time the pair had traveled to Turkey as they infamously spent an eight-day vacation painting in the Aegean in 1989 as guests of the late Ahmet Ertegün, the co-founder and president of Atlantic Records, whose legacy includes discovering and signing musical geniuses such as John Coltrane, Louis Armstrong, Led Zeppelin, Ray Charles, the Bee Gees, Foreigner and Phil Collins.

Ertegün’s home, which won architect Turgut Cansever the Aga Khan Award for architecture in 1978 and is located in the heart of Bodrum, has hosted an endless list of celebrities and contributed greatly to the once sleepy fishing town’s now-moniker as the "St. Tropez of Turkey." Among the visitors Ertegün hosted decades ago was Princess Margaret, Yves Saint Laurent, Valentino, Sting, Dustin Hoffman, Michael Caine and most famously Mick Jagger as his daughter Jade Jagger would go on to open Bodrum’s first fine-dining restaurant by the name of Secret Garden in 2012 housed in the now-closed Halikarnas nightclub, the heyday of which the now-late Ertegün contributed greatly to.

But alas, times have changed and over the past decade, the draw of Bodrum has altered to include its beauty and nature as a reclusive retreat spot for the world’s most famous models. The Life Co., detox and wellness center, which has since branched out to include Antalya and Thailand’s Phuket, was first made popular by none other than supermodels Kate Moss and Naomi Campbell and was also visited by actresses Kelly Brook and Sadie Frost and fashion designer John Galliano.

Bodrum has always been popular among the supermodel set with rumors abounding that Moss may have actually purchased a home on the peninsula as supposedly she and Campbell did a little bit of house hunting in years past. Campbell actually gained her fame, like Cindy Crawford, by modeling swimsuits by famous Turkish brands. Supermodel Adriana Lima also spent time in Bodrum’s Gümüşlük neighborhood four years ago with her then-boyfriend Turkish self-help guru Metin Hara. Meanwhile, in other real estate news, both world-famous footballer Cristiano Ronaldo, as well as then-couple Angeline Jolie and Brad Pitt, reportedly purchased villas in Izmir’s coastal town of Urla five years ago, while Jennifer Lopez is said to have purchased a home in Istanbul’s Ataşehir district.

Bodrum and Turkey’s southern coast have always been a favorite destination for the rich and famous and especially experiencing it by sea and aboard a yacht, an experience referred to as a “Blue Cruise,” which has become widely popular in the days of the coronavirus. A report released by Bloomberg on Tuesday states that the number of superyachts sailing off the coast of Turkey has nearly doubled this year at 63, compared to last year’s 26. Some of the world’s most famous yachts, such as the 140-meter (131-foot) Sheherazade and the 100-meter Madame Gu, both owned by Russian billionaires, have arrived this summer. Last summer the 123-meter superyacht Al Lusail owned by Qatari Emir Sheikh Tamim bin Hamad Al Thani, also docked in Bodrum, while Russian mogul Roman Abramovich has also been to Bodrum repeatedly aboard his superyacht The Eclipse, which at 162.5 meters was once the longest privately owned yacht in the world. In 2014, even Facebook co-founder Mark Zuckerberg paid a visit to Bodrum on his boat and disembarked with his then-girlfriend and now-wife Priscilla Chan to enjoy a cup of tea near Bodrum Castle. Bill and Melinda Gates are also rumored to have anchored off of Yalıkavak. While Tesla CEO Elon Musk paid a visit to Ankara, his mother Maye Musk, who also happens to be a supermodel, is said to have spent time last summer at the Swissotel Resort in Bodrum’s Turgutreis.

Meanwhile, some of Hollywood’s most famous couples, such as Tom and Rita Hanks and Michael Douglas and Catherine Zeta-Jones, have also visited Bodrum aboard boats. Tom Hanks has been to the Bodrum peninsula multiple times, with his last trip being aboard none other than The Maltese Falcon four summers ago. Built in and launched from Istanbul’s Tuzla, the 88-meter The Maltese Falcon is one of the most famous and complex yachts ever made and is owned by Elena Ambrosiadou, a Greek hedge-fund manager and one of the wealthiest women in the world. The yacht was originally commissioned by Amazon and HP shareholder Tom Perkins. Hanks was even seen waving to the onlookers, who recognized him aboard the yacht, which just goes to show you never know who will be popping up in the Turkish Riviera next.