Get your greens: Sprout into spring at Turkey's best herb fests 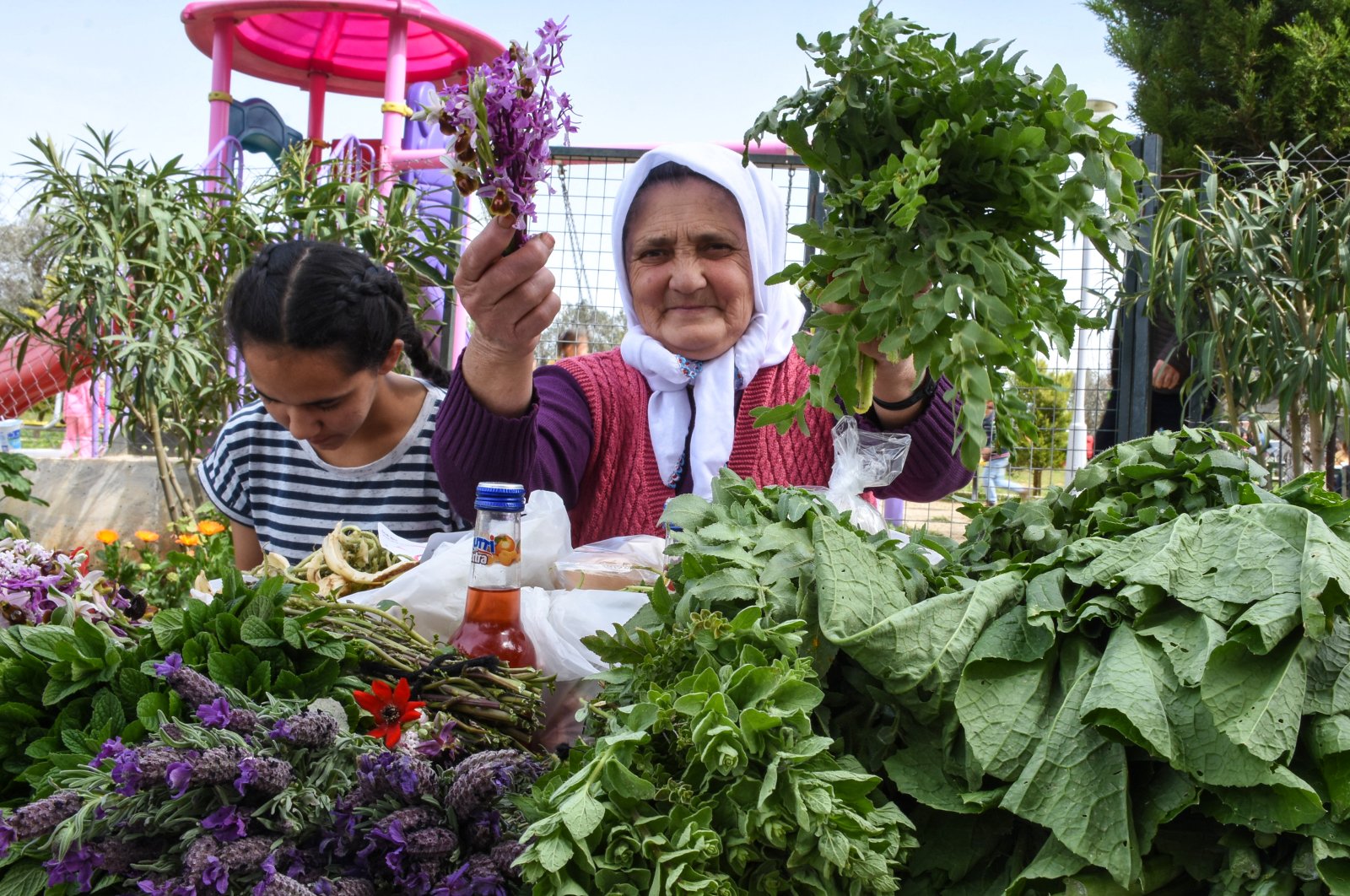 Streets in the center of the village of Ortakent in Bodrum will be lined with stands showcasing the wild greens and culinary traditions the Aegean area is famous for. (AA Photo)
by Leyla Yvonne Ergil Mar 05, 2020 1:40 pm

When one thinks of Aegean cuisine in Turkey, it's impossible not to mention all the wild herbs and spices used in the local dishes. If you fancy savoring all those amazing flavors and discovering edible greens you have not heard of before, make sure to stop by one of these festivals

This month marks the start of a number of the country’s most entertaining and highly anticipated herb and vegetable festivals. Luckily, some of Turkey’s most popular vacation destinations come to life for the start of spring to celebrate the local products their respective regions are famous for.

There are four festivals coming up this month and next that are especially worth visiting. They are being held in the coastal towns of Bodrum, Alaçatı and Urla, and each will showcase local food products, culinary traditions and live musical and dance performances in what are already beloved holiday spots in their own right.

Next weekend, the district of Ortakent in Bodrum will be hosting the "Bodrum Bitter Herbs Festival" ("Bodrum Acı Ot Festivali" in Turkish), which will be a two-day feast devoted to the fresh herbs and wild greens the Aegean region is famed for. Think of hemlock, wild asparagus, radish and the blessed thistle as just some of the many different indigenous and wild greens that will be showcased on stands and at restaurants in the center of Bodrum’s town of Ortakent. From 10 a.m. to 7 p.m. on both Saturday and Sunday, March 14-15, there will be dozens of stands set up presenting local preparations of the region’s herbs. There will also be workshops and dance and musical performances held throughout the weekend, and a number of well-known restaurants will offer special menus and discounts for the festival, such as Müdavim and Gemibaşı in Bodrum center; Gebora Balık, Yahşice Balık and Köşem Balık in Ortakent; and Balıkçi İsmet in Bitez.

This festival serves as the perfect time to visit this ultra-popular summer holiday destination, which is overwhelmed with visitors in the sweltering months. In March, the weather is pleasantly warm and sunny for the most part and this is when the locals, including an extensive expat community, and visitors come out to socialize and enjoy this more relaxed version of the region.

The "Urla Herb Festival" (in Turkish, "Urla Ot Festivalı") is admittedly one of the lesser-known “wild greens” festivals which has become a popular pastime in a number of Aegean holiday destinations, namely Bodrum and Alaçatı. However, like the town itself, the "Urla Herb Festival" is a charming gathering of locals and visitors to celebrate the region’s famed healthy herbs and greens that will take place with stands lining the town center over the weekend of March 21-22. Located between Çeşme and İzmir, the smaller town of Urla will come to life next weekend, and rightly so, as it will also be gearing up to host the much bigger "Urla Artichoke Festival" in mid-April.

The "Alaçatı Herb Festival" (in Turkish, "Alaçatı Ot Festivalı") is and will always be the country’s most popular spring festival. For some reason, Alaçatı has become one of the most highly sought-after and expensive vacation destinations in summer. First discovered for its prime windsurfing positioning and thus considered to be one of the spots for the sport in Europe, over the past two decades or so, the town of Alaçatı has blossomed into becoming Turkey’s most boutique, hip and chic holiday destinations. Historical stone houses have been renovated into bed and breakfasts and fine-dining restaurants and artisan shops all set along a maze of winding cobblestone streets become fully saturated in the summer months.

The town ushers in the start of the season of spring, however, with the annual "Alaçatı Herb Festival," which will take place this year over the weekend of April 9-12. Going into its 11th year, this annual event has seen unprecedented success as hundreds of thousands flock in from all over Turkey and abroad to celebrate the beloved Aegean greens that dominate the cuisine in the region. This four-day festival will have streets lined with stands exclusively showcasing the various herbs that grow in the region and in fact, as a first, this year there will be no gift stands as in the past and the focus will be entirely on local food products. In addition, there will be cooking classes and competitions, a parade and guided wild green gathering excursions held on the sidelines. The town’s stunning boutique hotels and restaurants will open for the event, many of which will be offering specials to celebrate wild greens. Due to high demand though, it is wise to book a spot early on as the whole town fills up for this immensely popular event.

Fast becoming the second most popular spring harvest festival in Turkey, the "International Urla Artichoke Festival," (in Turkish "Uluslararası Urla Enginar Festivali") celebrates the beloved “sakız” artichoke, which hails from the İzmir region. Known for having an earlier harvest, this regional artichoke is celebrated annually with an elaborate festival that boasts a full schedule of seminars, cooking classes and competitions, and dance and musical performances, in addition to stands of artichoke dishes and local products being set up throughout the town. This year will be the sixth edition of the "International Urla Artichoke Festival," taking place over the weekend of April 17-19. The majority of the weekend’s program takes place in Urla’s Cumhuriyet Square; however, there are also live musical performances held throughout each day in the Malgaca market area, Demirciler Street and the town’s quaint artists’ street referred to as Sanat Sokağı. Growing in demand, over 100,000 people have been attending this festival over the past few years, so it is highly advised to arrive via a tour or to reserve accommodation early.