Tea time in Turkey: The healing herbs to give a try this winter 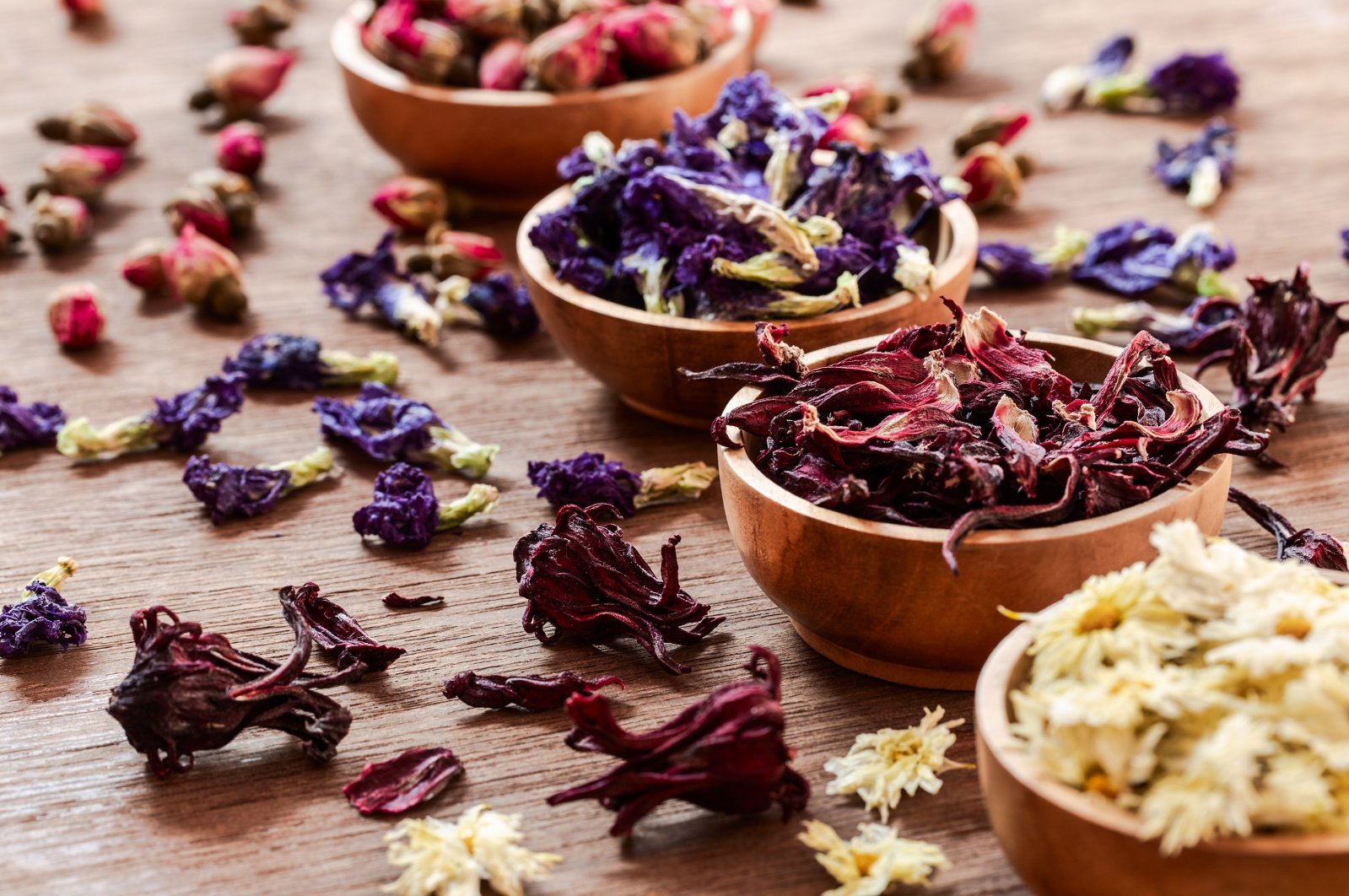 There are many dried herbs and flowers Turks use to consume as health-boosting teas. (Shutterstock Photo)
by Leyla Yvonne Ergil Nov 19, 2020 12:40 pm
Edited By Yasemin Nicola Sakay

Tea is a way of life for Turkish people; whether it's a classic cup of rich black tea or a fragrant herbal tea, you'll never see them without their favorite drink. Here are some of the most consumed and unique teas Turks love to drink

Not only are we well into autumn, which is that time of year when the flu season rears its ugly head, but the world is also contending with a deadly pandemic in the form of a highly contagious virus that can be detrimental to our health especially when our defenses are down. Thus, there is no better time than now to embark on a healthy practice of drinking herbal teas to boost our immune systems and to ensure we feel as good as ever. As with vitamins and supplements, it may be best if you ask your doctor before you add these teas to your diet.

Turks are famed for their love of tea, especially the basic black tea variety that is consumed in multiples during breakfast and after other meals or simply as a pick-me-up throughout the day. However, there are a number of herbal tea remedies that are also applied by the Turks as well as a variety of teas trending abroad for their health benefits that have made their way into Turkey.

From the most basic to the fanciest, here is your guide to drinking tea in Turkey right.

The Turks have always consumed a number of healthy herbal teas to combat a wide variety of ailments. Every tea garden in the country offers sage tea as an herbal alternative to the traditional black tea. Served with a wedge of lemon and referred to as “adaçayı” in Turkish, sage tea is high in nutrients and antioxidants and has antiseptic and antibacterial qualities, making it a great aid for a sore throat as well as in oral care.

Linden tea, or “ıhlamur” in Turkish, has always been the go-to remedy for anyone feeling under the weather, while chamomile, which is called “papatya,” and “melisa,” aka lemon balm tea, are regularly associated with relaxation, with the latter literally putting one to sleep.

St. John’s Wort, which is a popular herbal remedy for depression in the western world, has been gathered by local villagers in Turkey who refer to the yellow flowers as “sarı kantaron” and has been consumed as a tea or prepared as an ointment for skin healing for ages. Gaining in popularity is also “passiflora”, which is a species of flower that produces passionfruit, in a tea or as an oral solution to aid with anxiety and sleep disorders.

Bergamot, with a similar pronunciation in Turkish, is the citrus fruit that provides the distinctive flavor of Earl Grey tea, as it is more widely known worldwide. Believed to lower cholesterol, it can be a healthy addition to black tea, which creates the aforementioned tea beloved in the U.K. and beyond.

For weight loss in Turkey, a tea brewed of a few dozen cherry stems, which are called “kiraz sapı” in Turkish, is believed to be helpful serving as both a diuretic and laxative that also promotes kidney function. Olive leaf tea, which is “zeytin yaprağı çayı,” is higher in antioxidants than the green and acai berry teas hailed for that property and is also considered a weight loss aid as well as a blood pressure and blood sugar stabilizer. Sworn by the locals in villages that produce the beloved artichoke are the benefits of drinking seeped artichoke leaves, called “enginar yaprağı,” which despite having a prominent bitter taste is believed to be the most beneficial of herbal teas when it comes to weight loss and is also one of the rare remedies to promote liver care.

Called "kekik" in Turkish, wild thyme is a herb gathered from the highlands of the Marmara and Aegean regions and another popular medicinal tea used in Turkey. Its potent flavor denotes its multiple health benefits which include stimulating the immune system and serving as an expectorant and antibacterial drink. Turks drink it for stomach, kidney or bladder issues as well as to improve blood circulation, lower bad cholesterol and relieve a sore throat or cough.

The most popular herbal tea in Turkey for respiratory issues remains “karabaş,” which is what the Turks call French lavender. Not only does lavender ease stomach pain, but its anti-inflammatory properties soothe the muscles in the throat and chest and open the lungs, making it easier to breathe. The original blue tea for the Turks, lavender’s antibacterial properties also work to eliminate the bacteria that can cause congestion and chest colds, ensuring you never get a cold to begin with.

There are a number of new trends in tea drinking worldwide, bringing into question which is the healthiest and tastiest of the vast options available. While we are all familiar with the black tea that the Turks, Brits and many other cultures are obsessed with, there are now additional colored caffeinated teas that have been added to the mix, namely green, white and red tea. So what is the difference? Well, black tea is the most heavily processed of these caffeinated variations and is made from fully oxidized leaves left to dry in the sun. Green tea is the exact opposite in that it is unoxidized and typically steamed for processing, thus maintaining its chlorophyll, vitamin C and minerals, and making it a powerful antioxidant with less caffeine than its darker counterpart.

White tea is the newest version of the teas that we are familiar with, derived from Camellia sinensis leaves, and is the least processed of these variations. White tea leaves are picked early before their buds have even opened and are left to dry in the sun. White tea has both the subtlest of tastes and the least caffeine.

Red tea is in fact rooibos tea and is a whole different form of oxidized tea harvested from leaves of the Aspalathus linearis plant, which turn from green to red in the process. This tea is loaded with vitamin C, antioxidants and minerals such as copper, iron and magnesium yet has no caffeine.

The newest trend in tea drinking habits has been the introduction of blue tea, aka butterfly pea flower tea that hails from Southeast Asia, where it has been consumed hot and cold for centuries. This beloved blue brew in countries such as Thailand, Vietnam and Sri Lanka has now made its way to Turkey and is famed for its color-changing properties such as turning a deep purple with the addition of a few drops of lemon juice. Rich in antioxidants, blue tea is immunity-boosting, improves cognitive function and aids in weight loss. It is also good for the heart and the eyes, combats ailments such as diabetes and hair loss and is considered to have properties that make it all-natural paracetamol.