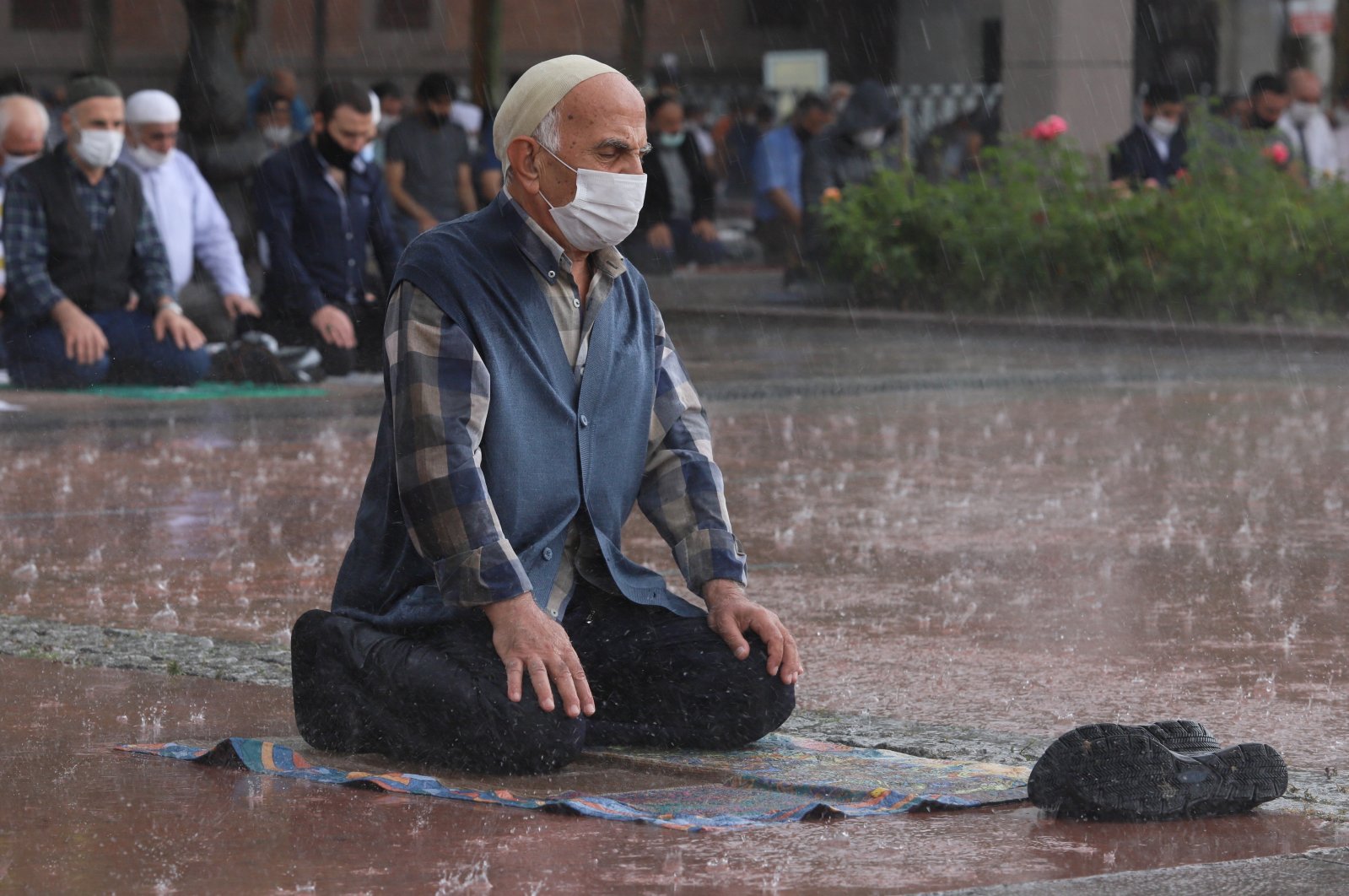 A man prays as it rains in the courtyard of a mosque which was opened months after COVID-19-induced lockdowns in Ankara, June 19, 2020. (IHA Photo)
by Leyla Yvonne Ergil Sep 21, 2020 12:10 pm
Edited By Yasemin Nicola Sakay

Turkey has a number of interesting rituals and creative beliefs, as its tradition of the evil eye bead belies. When it comes to natural phenomena and post-summer drought, one old ritual stands out among others

As my home state of California and America's entire West Coast is suffering from unprecedented wildfires just months after the devastating fires in Australia, the need for rain on our planet has never been greater. It is times like these when the only thing in our power is praying for rain. While we have all heard of the Native American tradition of performing rain dances in the hopes of precipitation, there is a lesser-known tradition of holding a “rain prayer” that is prevalent in Turkey’s rural regions and has existed through much of the country’s history. In fact, just last week, there were multiple rain prayers held in the province of Adana in an effort to contain the wildfires that have blazed there this summer.

Traditionally in Turkey, the “rain prayer,” or as it is referred to in Turkish “yağmur duası,” was held in an effort to encourage the fertility of the land and to combat droughts that negatively affected the country’s vast agricultural lands. According to Muslim beliefs, it is God who decides to bestow the gift of rain or the punishment of aridity, and thus for centuries, Turkish rural communities have come together at times of drought to pray to the higher forces requesting rain.

While this tradition spans back to well over a thousand years and the times of Turkic mythology, the eighth-century Oghuz Turks and even the Prophet Muhammad, the ritual has prevailed throughout Ottoman and Turkish history. With its rooted tradition taking place in nearby highlands of rural villages, throughout history it has also been practiced in mosque courtyards, such as the case in Adana and during Ottoman times at Hagia Sophia and Sultanahmet Square (once known as At Meydanı) and even on the grounds of the Ottoman Imperial Palace in Edirne (Saray-ı Cedid Amire) to name just a few of the most significant structures in Turkey’s history.

How it is practiced both back then and still in cases these days is that locals from a particular village or region will come together to decide on a date and location to hold a rain prayer, which is then announced to the greater community by the imam at the local mosque. In the days leading up to the prayer, members of the community visit the designated area, which is generally one of the most highly elevated points in the vicinity, and proceed to collect 7,000 small stones or pebbles after which they or an imam would say a prayer for each and every single stone.

These stones play an important role in the tradition as spanning back to the time of the Oghuz and Altay Turks, there was the longstanding belief that the Yadataşı is a magical stone that had the capabilities to change the weather. The practice of using the stone in prayer was referred to as “yadacılık,” and the practitioners themselves, believed to have special powers in utilizing the stone to encourage rainfall, were referred to as "yadacı." According to Chinese sources, the Oghuz and Altay Turks won battles due to their ability to control rain, hail, frost and snow, derived from this stone, which is also mentioned in texts penned by Venetian explorer Marco Polo. The stone itself that was used for these mystical purposes is purported to have been jade, referred to in Turkish as “yeşim.”

Another tradition leading up to the “rain prayer” is the gathering of the community at designated homes beforehand in order to collect funds donated by every local household in amounts established according to their financial status. These donations were then used to purchase a sacrificial farm animal that was butchered at the designated location and prepared as a meal for the participants during the ceremony. One of the important points to note of this process is that it is considered sacrilegious to bargain down the price on the said animal.

On the actual day of the ceremony, which would generally start early in the morning, the majority of the men in the community, with women and the elderly prohibited from taking part, would hike together to the designated ritual spot. They would also take with them the 7,000 stones collected and prayed upon as well as the sacrificial animal, bulgur, rice or wheat to be pounded on-site and cauldrons to prepare the bulgur and meat as a meal. When passing a creek on the route, the stones are supposed to be dipped in water and left there or in the ritual vicinity. The first sons of participating families were also encouraged to take a dip in the water so long as they refrained from wringing the water out of their clothes in the aftermath and let them simply drip dry. Meanwhile, the animal would be sacrificed and a meal prepared from his flesh and shared amongst all of those present either at an opportune location on the way or at the designated prayer site itself.

Once the participants reached the peak, chosen in order to be closer to God, the imam leads a specific “rain prayer,” referred to as "istiskā," which is read aloud and in a pleading tone to appease to the greater forces to bestow rain upon their lands. One of the quirkiest customs to take place at this time is that once the prayer has been read, everyone then rushes back down to their town and homes as if it was suddenly about to rain, which as you can gather most of the time it did!