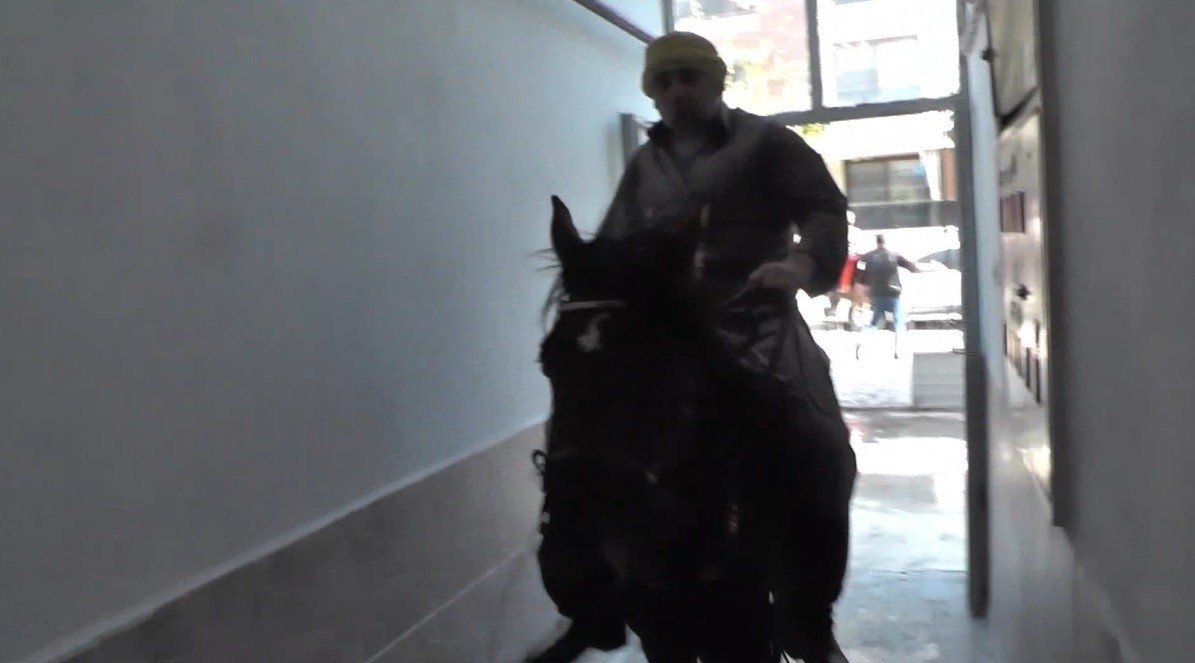 Keeping a centuries-old wedding tradition alive, a Turkish man entered an apartment building Thursday on horseback and made his way up to the first floor in the Bergama district of western Turkey's Izmir province.

Traditional Turkish weddings – in Bergama at least – include a historical equestrian team game called “Cirit,” or “Jereed,” where riders on horseback score points by throwing a blunt wooden javelin at the opposing side.

After the game is played, it is customary for the hosts of a wedding to present the riders, who arrive at their front door, with gifts. During this interaction, the riders must remain on their horses.

So, when Burak and Hatice Karataş were getting married they decided to honor the tradition and invited 12 horsemen to the wedding.

After playing the historical game of Jereed, the riders came to the house with drums and horns to receive their gifts. Since tradition dictates that they must stay on their horses, the riders at first remained outside the apartment while speaking to the wedding host who was on the first floor.

Then, one of the equestrians, Ahmet Sıkı, approached the groom's father, Emin Karataşlı, about going up to the first floor on horseback. After a little back and forth, Sıkı was given permission to ride into the apartment and he ascended the stairs with his horse to the first floor.

After saluting the puzzled audience from the balcony with his horse, Sıkı descended the stairs again and exited the apartment.

Karataşlı explained to Anadolu Agency (AA) that Jereed was a tradition at special events like weddings in Bergama, and as such, they had invited the horsemen.

“One of the horsemen said 'I will climb to the apartment with my horse.' I said 'You can't climb up here.' He said 'I can.' It turns out that horse was used to it, how could I have known?"

“He entered the apartment, went onto the balcony,” Karataşlı said and added, “We congratulated him. We gave our brother Ahmet his gift. We were delighted, happy. Then he slowly descended with his horse.”

Unsurprisingly, Karataşlı said it was a day they will never forget.