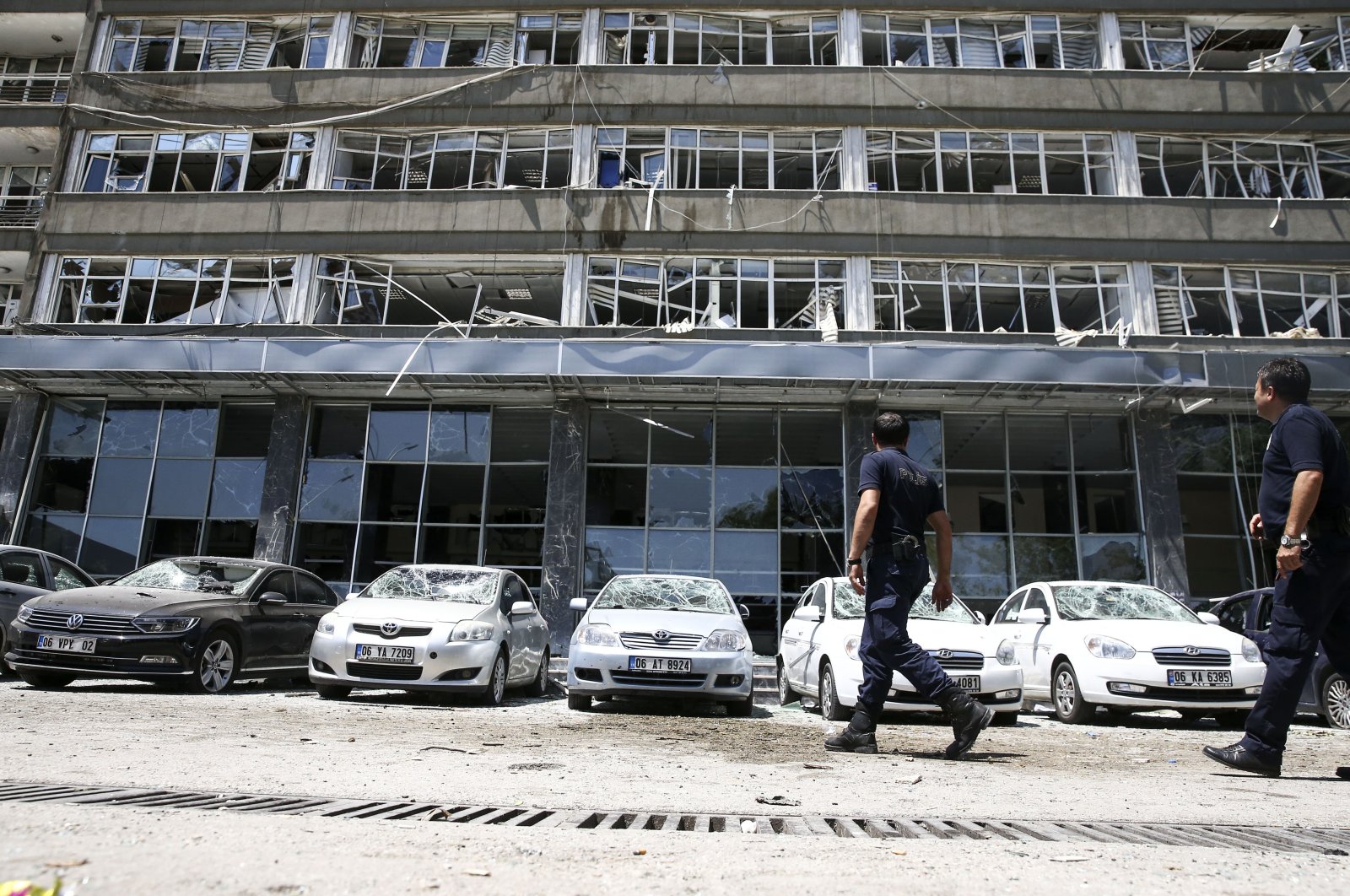 This undated photo shows a building inside the compound that houses the Ankara branch of the Turkish National Police and cars outside damaged in attacks by putschists. (AA Photo)
by DAILY SABAH Mar 06, 2020 4:17 pm
RECOMMENDED

The Chief Prosecutor’s Office in the capital Ankara has filed a lawsuit against 58 people, including Gülenist Terror Group (FETÖ) leader Fetullah Gülen, for property damage during the July 15, 2016 coup attempt.
FETÖ’s military infiltrators carried out the coup attempt that killed 251 people. Defendants, mostly army pilots, are accused of damaging properties of public institutions and citizens with airstrikes during the attempt.
The indictment says putschists commanding F-16 warplanes took off from Akıncı military base in Ankara on July 15, 2016, and struck several locations, from Parliament to a road and parking lot near the Presidential Complex, headquarters of the Special Operations Department of the Turkish National Police, the headquarters of the police’s aviation department, the headquarters of satellite operator TÜRKSAT and the Ankara branch of the Turkish National Police. Prosecutors say the bombings and low-altitude flights damaged houses, public buildings and vehicles.

Prosecutors are asking for 146 prison sentences amounting to 1,728 years for each defendant for property damage.

It was from the Akıncı base, which was renamed following the attempt, the coup plotters planned and conducted their coup attempt. This was where warplanes and helicopters took off to strike Parliament, an anti-coup crowd near the Presidential Complex and the headquarters of an elite police unit. It was also at Akıncı where the top military brass, including then-Chief of General Staff Gen. Hulusi Akar, were brought after they were kidnapped by putschists. By the early hours of July 16, 2016, a few putschists were still holding out against anti-coup forces in the base. Strong public resistance, combined with a swift response by anti-coup soldiers and law enforcement, helped thwart the coup attempt.

Since the failed coup attempt, hundreds of military officers and civilians who took part in the bid have been brought to justice. Tens of thousands of people linked to FETÖ were also detained or arrested in the aftermath of the attempt.