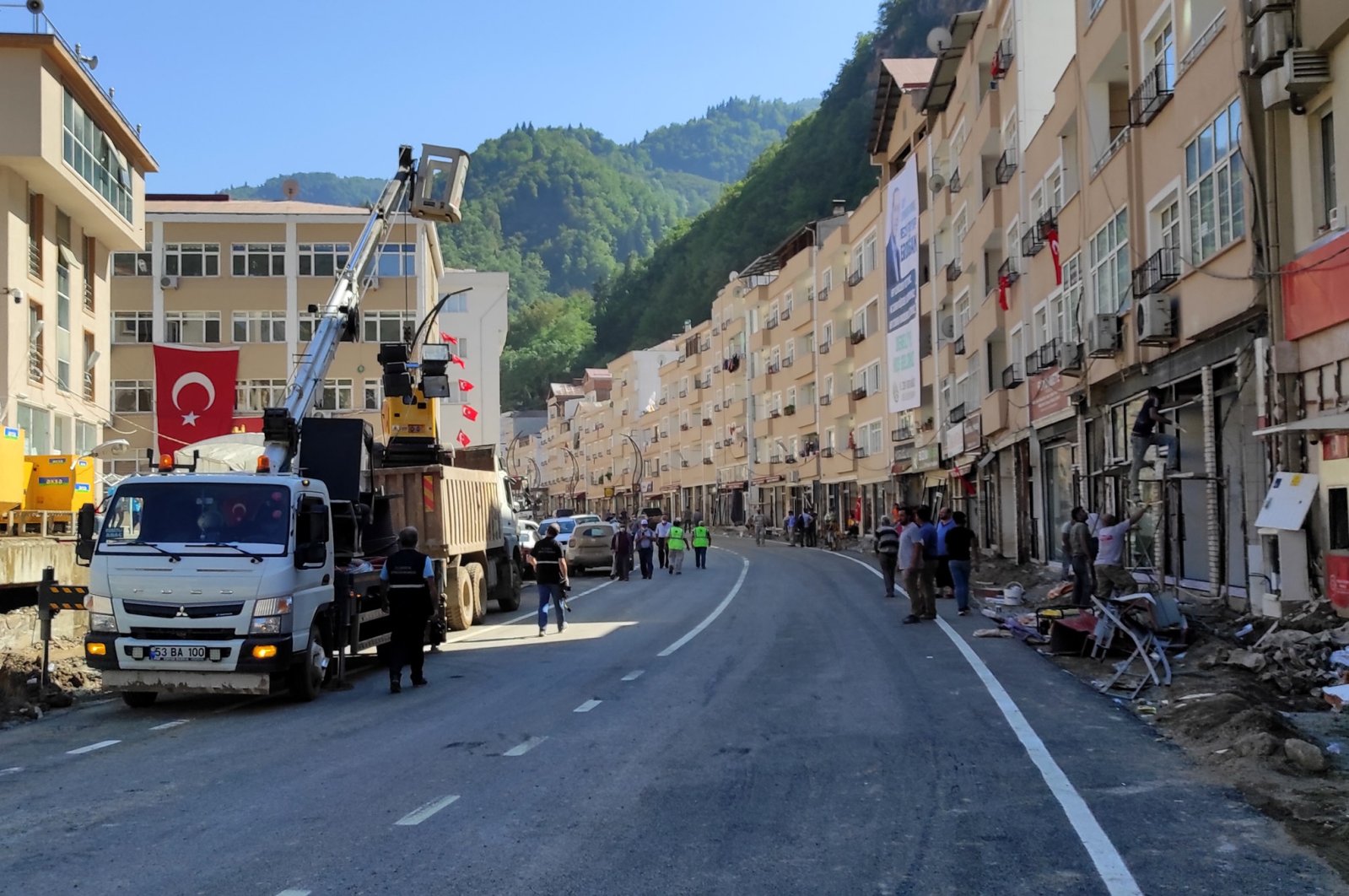 The work is underway to rebuild Dereli, a northern town hit by devastating floods last month, as authorities pledge to reshape it to prevent future disasters

Unprecedented torrential rain wreaked havoc on Dereli, a town in the northern province of Giresun, on Aug. 22. Thought the town has largely recovered in a week, the search continues for five people who went missing in the subsequent floods. The government began reconstruction works this week as the town mourned 10 people who lost their lives in the floods. President Recep Tayyip Erdoğan, who visited the town Monday, had promised to do everything necessary for recovery, "be it demolition of buildings and rebuilding new ones."

Ministry of Environment and Urban Development is overseeing the work and Minister Murat Kurum said they would "build a new Dereli" with "an exemplary transformation project," during a visit to the town Tuesday. All buildings, from houses to shops, constructed below the stream level in the town whose name literally means "(a place) with a stream" in Turkish, will be removed.

Kurum said construction began with consideration to the plinth level. The faulty construction of the buildings at a level that allowed them to be inundated with water was one of the factors that aggravated the damage. Experts blame it on haphazard planning in the past.

Volunteers and the army helped businesses and houses in Dereli in cleaning up the debris. Most workplaces were cleaned and repaired within a few days. Heavily damaged buildings will be demolished and temporary, prefabricated shops will be installed in the town before they are reconstructed. Kurum said they expected to wrap up the reconstruction of shops, residences, and schools, as well as local governorate and police buildings within a year.

At least 17 buildings have been destroyed and 361 more structures slightly were damaged in the flood. Around TL 9 million ($1.23 million) has been authorized initially for recovery and rehabilitation of the region. The local municipality and the state-run housing authority have started reparation work for some 200 businesses in the disaster area.

The population of the Black Sea region, which is home to a climate with almost year-round rainfall, is challenged by rough terrain that forces settlement on uneven territory in mountainous areas. Though the population is sparse in places, construction in areas with risk of heavy floods is common in places with a high population in the region which is home to more than 12,000 streams.

"It is impossible to completely stop these floods in the Black Sea region. It doesn’t matter if you are a world superpower or a great state, there is simply no way. We need to learn to protect ourselves first," Agriculture and Forestry Minister Bekir Pakdemirli said earlier. Pakdemirli has also blamed global warming for causing such violent and sometimes unpredictable weather patterns. "This was not the first, and it won’t be the last. We will see similar disasters. What we need to do is listen to warnings from authorities and take the necessary precautions. We believe citizens should cooperate more with local authorities," he said.

Experts say that the impact of a drought moving from the south to the north and fallout from the onset of continental climate takes a toll in the region. Vaporization aggravated by climate change is the main factor in flash floods and heavy rains. Unchecked development in river beds and inadequate rehabilitation of lands are among other factors for such disasters.