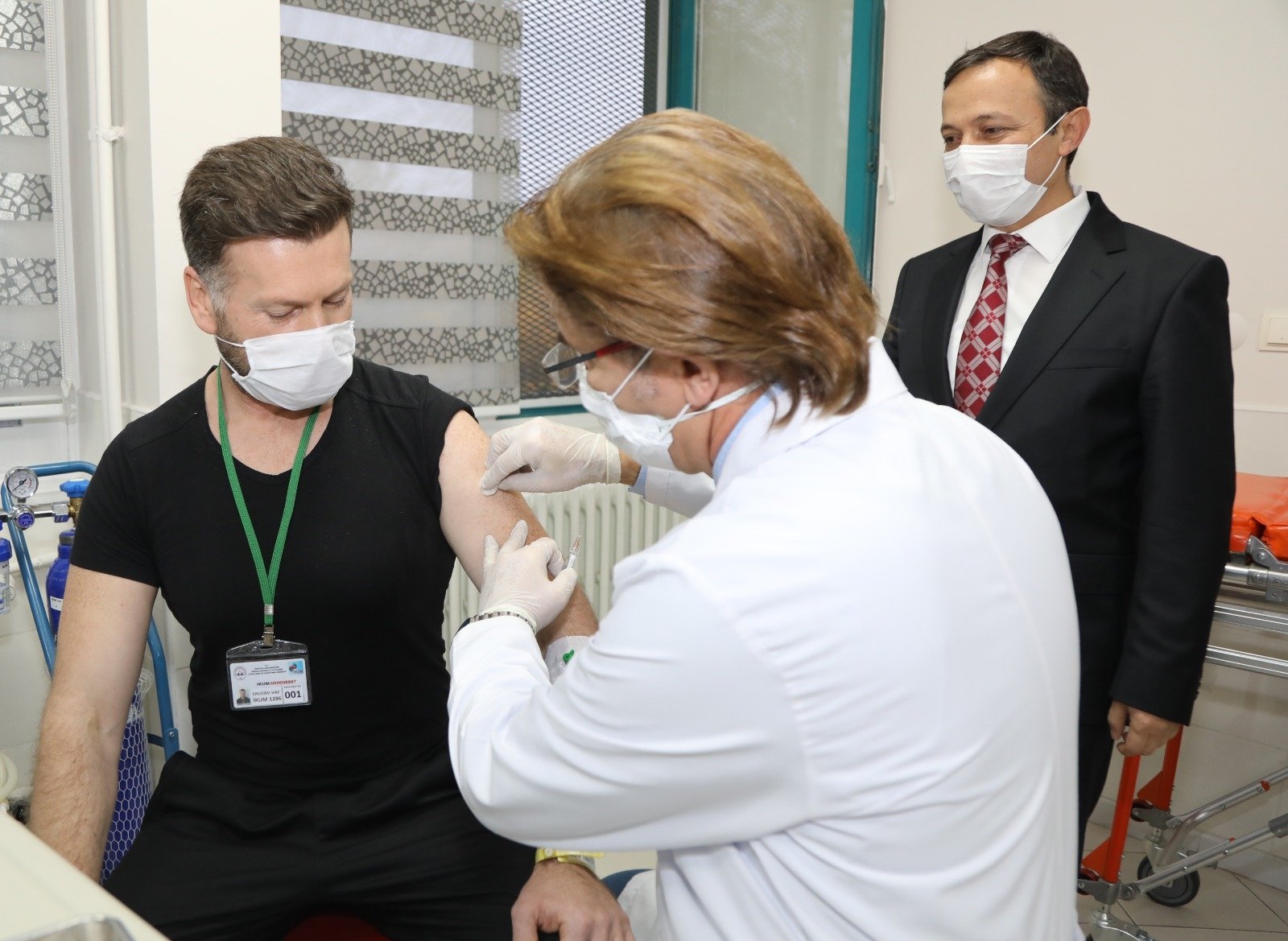 The first volunteer was injected with a dose of ERUCOV-VAC, a coronavirus vaccine candidate developed locally in Turkey on Thursday, in a landmark development in fight against the outbreak

Scientists at Erciyes University in central Turkey's Kayseri launched Thursday a human trial of ERUCOV-VAC, an inactive vaccine candidate against the coronavirus.

A volunteer was injected with the first dose and 43 others, who are between the ages of 18 and 55 and have not been infected with the virus, will follow.

The trial comes at a time when Turkey strives to speed up vaccine development on its own while also testing imported vaccines on volunteers.

The university was among the venues for the development of a locally-made vaccine since the outbreak made its foray into Turkey in March.

Scientists at the university's Vaccine Research and Development Center (ERAGEM) joined forces with the private company, Koçak Farma, which undertook serial production work for the vaccine.

After a Health Ministry approval, the Phase I trial began, the university said in a written statement Thursday.

Nazif Durna, the first volunteer to receive the ERUCOV-VAC vaccine, said he wanted to be "a hope for people."

University president Professor Mustafa Çalış said the vaccine candidate wrapped up pre-clinical studies and they planned to complete Phase I trials by early January. Volunteers will have a second dose of the vaccine with an interval of three weeks after the first inoculation.

Authorities have earlier announced that the country was closer to human trials for three locally-made vaccines out of a total of 13 vaccines under development. Turkish scientists are also working on 10 projects for the development of drugs against the deadly disease.

Human trials of vaccines developed by China, and in U.S.-German partnership are already underway in the country which charted a road map for the vaccination of the masses. If the trials prove successful, the country plans to inoculate 2.5 million people with the CoronaVac, developed by China's Sinovac in the first stage, according to the media.

Health care workers, members of law enforcement and people working in crowded places will be prioritized for the first mass vaccination, which is scheduled for early 2021. Some 5 million doses of vaccines will be obtained from China for two doses for 2.5 million people. CoronaVac was the first foreign vaccine to launch Phase 3 trials in Turkey in September. Thousands of volunteers have received doses since. Earlier in September, a vaccine developed by U.S.-based Pfizer and Germany's BioNTech also launched human trials in Turkey. The trials have gone smoothly so far and it has been found to develop 98% antibodies in volunteer recipients.

Turkey was forced to impose new restrictions and the government stepped up warnings to the public as the number of patients has seen a surge in recent weeks. Earlier this week, the government announced that some businesses were ordered to close early while an all-out lockdown was ruled out. Experts tie the surge in the numbers to people not heeding warnings, especially reckless youth ditching measures like masks and social distancing.

However, Afşin Emre Kayıpmaz warns that the virus did not lose its "deadly impact." Kayıpmaz, a member of the Health Ministry's Coronavirus Scientific Advisory Board, told Demirören News Agency (DHA) Thursday that the virus was still as infectious and lethal as it was when it arrived in Turkey.

Kayıpmaz, who also serves at Ankara City Hospital in the capital, said they still receive patients in critical condition. "The disease is still as bad as it was in March and there is no change in the state of patients we admit daily. They are not better than those we admitted months ago," he said.

Kayıpmaz said though the virus somewhat mutated, these mutations were for it to keep itself alive and infectious. However, he added that the fatality rate in Turkey and the world indirectly decreased somehow. "This is linked to an increasing number of tests and tracking down asymptomatic positive patients, as well as early diagnosis. In Turkey, for instance, we have a strong kit of diagnosis tools, be it blood tests, polymerase chain reaction (PCR) tests and imaging. The earlier we can use them, the earlier we can diagnose new patients. We ensure that asymptomatic people isolated at home and this helps limit infections," he said.