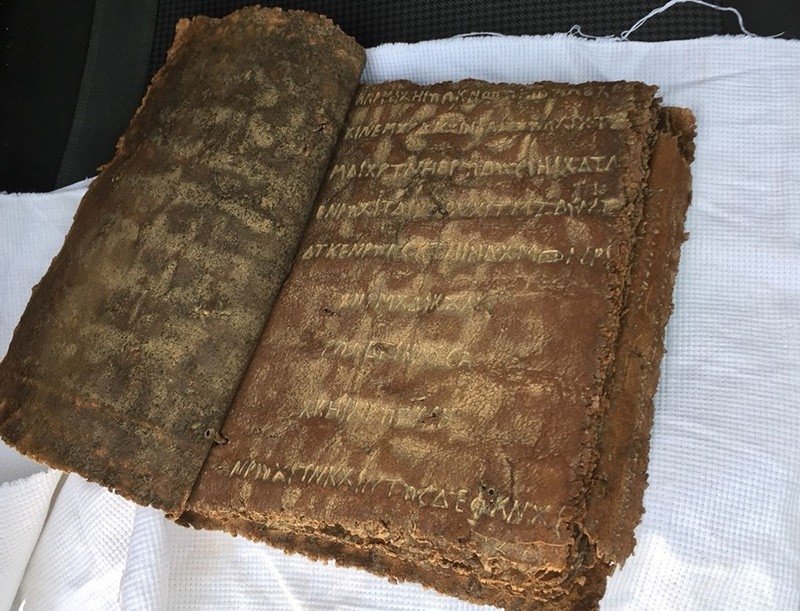 As Turkey's Middle Eastern neighbors Syria and Iraq grappled with years of war and conflict, Turkey saw a wave of artifact smuggling from these nations' rich cultural heritage, according to an expert. "Yes, the unrest in the region made illegal trafficking shoot up, but in line with the regional circumstances, Turkey is taking measures,” says Zeynep Boz of the Culture and Tourism Ministry's Anti-Trafficking Unit. "After the (2011) outbreak of the war in Syria, Turkey acted very quickly even before any international organizations had made declarations,” Boz said. "Turkey considers the matter of cultural property to stand above any political discussions,” she added. "Thus, as the unrest started, all (Turkish) museums, private museums and collectors were sensitized about objects possibly coming from Syria or Iraq. ... Any object of illegal origin seized in Turkey has either already been returned or is set to be returned to its country of origin,” she said.

According to the ministry, Turkey returned 81 objects to neighboring Iran and two more to China in 2019 alone. "Our efforts are not one-sided, and our respect for cultural property is not confined to our borders,” Boz explained. "It's worth noting that the circulation of fakes rose drastically as the situation in Syria started.”

The fight against cultural object trafficking in Turkey has three prongs, according to Boz. "The first,” she said, "is legislation, as at least since 1906, under national law, doing unauthorized excavations is prohibited. ... Failure to notify state authorities of even accidental findings is sanctioned. Additionally, under the law, exporting cultural property is punishable by five to 12 years in prison,” she added.

The second prong is "preventative measures,” she said. "It's very important to take action before illegal activity happens. Along these lines, inventory studies, security precautions, such as security cameras and guards or alarm systems, and efforts to raise awareness are given huge importance. ... By the same token, alerts that reach the Culture and Tourism Ministry are immediately examined, and all required information is discussed with public prosecutors as well as the relevant law enforcement units,” she explained.

International cooperation is the third prong in the fight against traffickers. "These efforts include the identification of objects located abroad, claims for their return, joint prosecutions, police operations and abiding by international conventions and bilateral agreements,” she added.

Boz also spoke about the cultural objects that Turkey managed to bring back home. "Since 2002, 4,441 artifacts have been returned to Turkey,” she said but added that "tens of thousands” of artifacts still need to be repatriated. "Due to secret excavations, sometimes it's hard to identify the origin of an object," she explained. "But the Culture and Tourism Ministry, in close coordination with the interior, trade and foreign ministries, works tirelessly to return all the objects identified as taken out of Turkey illegally,” she added. Most of the artifacts from Turkey are smuggled to Western countries like the United States, Britain, France, Germany and Switzerland, Boz said. "The Culture and Tourism Ministry also follows other countries that don't seem to have a big antiquities markets but do have deep pockets," she added.

As a rule, the ministry does not publicize its ongoing investigations or negotiations, but Boz disclosed a few objects that are expected to be returned to Turkey. She mentioned tiles from the Hagia Sophia Grand Mosque that are currently located in Paris' Louvre Museum, five objects at the Berlin Pergamon Museum; including the Konya Beyhekim Mosque's Mihrab and an old fisherman statue from Aphrodisias, a statue of Tyche (Thyke) from the Brussels Royal Museum of Fine Arts and several objects at the David Collection in Copenhagen; as examples of Turkey's efforts.

The most important international organizations in this field are UNESCO, Interpol, the World Customs Organization and the United Nations Office on Drugs and Crime (UNODC), she said. For Boz, the main difficulty in recovering artifacts from abroad is the applicable law. "All cultural property in Turkey is considered to be state-owned, and obtaining it without permission or handling, keeping, selling or exporting it is subject to imprisonment. ... But as long as destination countries fail to criminalize imports of illegally exported objects, efforts to get them back will fall short,” she said. "An object whose export is illegal under the source country's laws should be illegal to import under the destination country's laws. Otherwise, the traffickers easily launder objects of illegal origin. ... Additionally, supervision of art markets in the destination countries should definitely be strengthened,” she added. Legislation, law enforcement efforts and public awareness are the main tools Turkey uses in its fight against antiquities thieves, Boz said and added: "The efforts now are more focused on the latter.”

Warning of the dangers of treasure hunting or unauthorized excavations, Boz said: "People are dying or at least being defrauded. ... People who are involved in this crime should remember that they are risking their lives, freedom and also money. ... Illegal trafficking of cultural objects is definitely not a good way of earning money not only because of the destruction it wreaks but also as the risks a perpetrator takes do not seem profitable.”

According to a U.N. report in 2016, the British-based Museums Association estimates that annual profits from the illicit antiquities trade range from $225 million to as high as $3 billion. "The amount of money (to be earned) from the value of cultural objects is quite overblown,” Boz explained. "It's never the illicit diggers who get that money; it's the auction houses and the last link in the trafficking chain who earn this dirty money, while it's the illicit diggers who risk their lives and become a part of an illegal enterprise," she explained. With this in mind, she said, "The Culture and Tourism Ministry urges the public not to steal from their own country.”