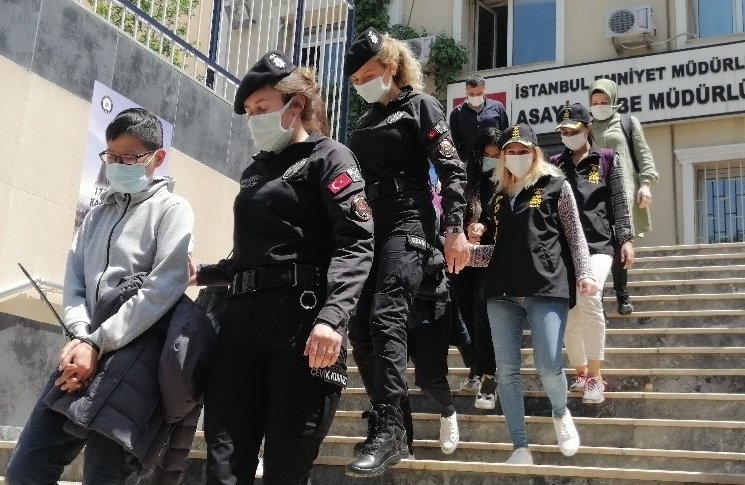 Twenty-four people were detained for alleged fraud over an online game and betting website they established in Istanbul, Turkey, May 24, 2021. (AA Photo)
by DAILY SABAH WITH AA May 24, 2021 4:41 pm
RECOMMENDED

Turkish police detained 24 people Monday for alleged fraud involving an online game and betting website they had established in Istanbul. The investigation revealed that the team members were forcibly detaining their foreign employees, many of whom came from China and Taiwan.

Ibrahim Ö and Özgür B filed a complaint with the Security Office Directorate Extortion Bureau Chief. They said that they started to work at the business in 2020 and the pair were tasked with taking people coming to work from China and Taiwan from Istanbul Airport to the technology company's owner Alimire P. The company allegedly seized the passports of these people, detained them and forced them to work at unknown locations.

The police carried out simultaneous raids on 21 addresses in the districts of Üsküdar, Ümraniye, Fatih and Sarıyer on Friday.

A total of 115 people, among which 21 are women, that included citizens from China, Taiwan, Singapore, Uganda and Turkey, were taken under police protection. Twenty-four suspects were detained after the investigation.

It was alleged that the suspects emptied their customers' accounts by promising them that they could earn money with a high-profit bet rate through the website they established.

In the raids under investigation, a total of $6,324,321 worth of cash in 9 different currencies, gold and a large number of tech items, including 254 mobile phones and 96 laptop computers, were seized.

Ninety-one of the people in custody were handed over to the Immigrant Smuggling and Border Gates Branch Office after processing at the police station. The 24 suspects were transferred to the courthouse.