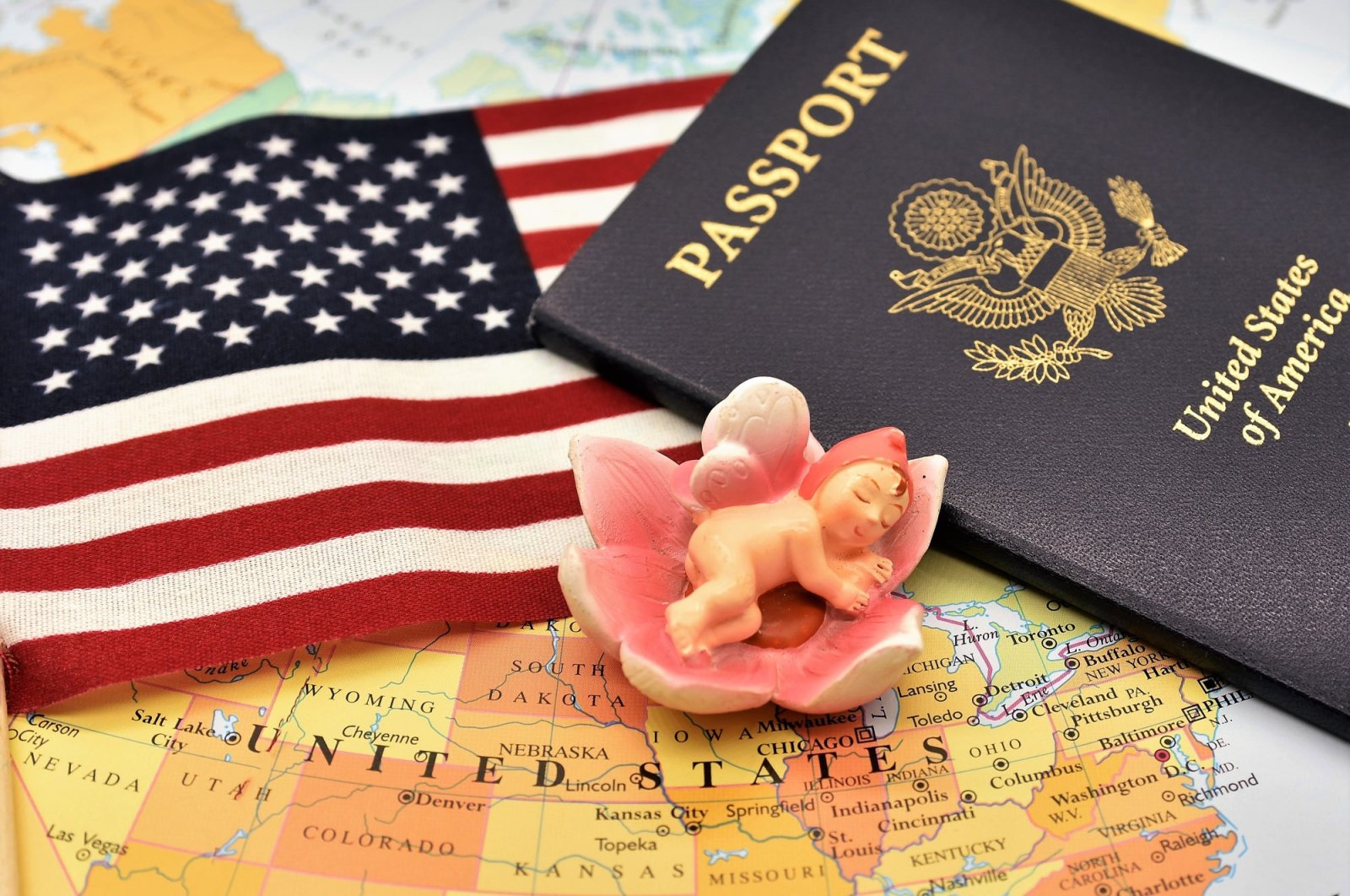 A newborn baby figurine, a U.S. flag and a passport placed together on the political map of America to depict the birthright to citizenship.(iStock Photo)
by DAILY SABAH Dec 03, 2020 12:49 pm
RECOMMENDED

Six people were charged in a U.S. federal court Wednesday for swindling $2.1 million (TL 16.47 million) in Medicaid funds and taking $750,000 from pregnant women from Turkey looking to give birth in the U.S., the New York Times reported.

Prosecutors in New York charged the defendants with running a "birth tourism" operation on Long Island, which organized the travel of Turkish women who gave birth to about 119 babies since 2017.

“The scheme facilitated pregnant Turkish women fraudulently entering the United States using tourist and business visas to give birth so that their children would obtain birthright citizenship and medical benefits,” a statement by the Eastern District of New York said Wednesday.

Of the six conspirators, Ibrahim Aksakal was the leader of the group, while Enes Burak Çakıroğlu, Sarah Kaplan Fiordalisa Marte and Edgar Rodriguez have been charged with conspiring to carry out visa, wire and health care fraud as well as money laundering. Five of the defendants were arrested Wednesday morning, but one suspect remains at large.

Prosecutors added that the costs of the births were fraudulently billed to the state, costing Medicaid $2.1 million.

“Using Internet ads, the defendants perpetrated an international fraud that relied upon a parade of women who paid them thousands of dollars in fees in order to enter the United States under false pretenses, to give birth here. The defendants cashed in on the desire for birthright citizenship, and the American taxpayer ultimately got stuck with the $2.1 million bill,” prosecutors said.

The suspects used advertisements to attract pregnant women on two Turkish-language Facebook pages. The ads pledged to provide top-quality services to the expectant mothers wanting to give birth in the U.S. For a fee of $7,500 per person, almost all expenses were covered, including transportation, delivery, post-birth medical care and assistance in the child's citizenship application. The defendants reportedly told the mothers to hide their pregnancy while traveling.

The U.S. has long attracted birth tourism, drawing pregnant mothers from around the world due to its policy of birthright citizenship. China is considered the biggest market for the industry.

Prosecutors emphasized that the defendants not only violated immigration laws but also stole millions of dollars in taxpayer money.

“Medicaid is designed to help people in need – not to be used as a slush fund for criminals to subsidize their fraudulent schemes, which is precisely what these defendants did. Let the message be clear: federal and local law enforcement will continue to work together to protect the residents of Suffolk County,” the statement added.