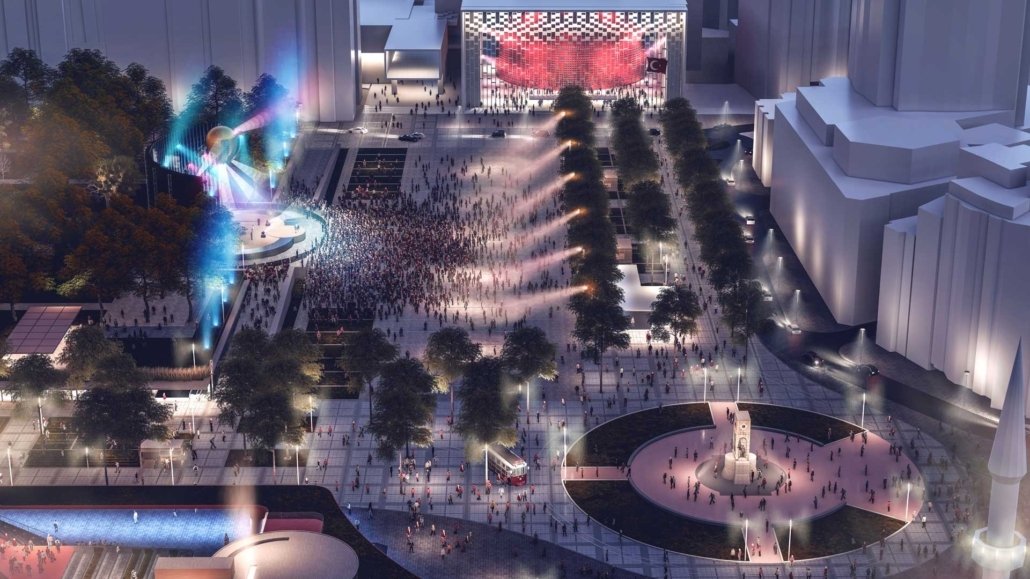 An artist's impression of the redesigned Taksim Square chosen in the public poll. (COURTESY OF IBB)
by DAILY SABAH
Nov 13, 2020 2:56 pm

A series of polls run by the Istanbul Metropolitan Municipality (IBB) for a facelift of some of the city's iconic venues ended Friday.

Some 352,784 people chose from among an array of renewal projects for Taksim and Bakırköy Squares on the European side, as well as the Salacak coastal strip on the Asian side in an online poll between October and November.

Some 233 projects by prominent architects competed in the design contest but Taksim square attracted the most interest with 209,728 votes.

Eventually, the voters picked "Project Number 15" from among the three finalists. The municipality plans to implement the renewal project soon.

The winning project for Taksim Square, which is among the city's most visited locations along with the adjacent Istiklal Avenue, plans to give a new life to the somewhat dull space that mainly functions as a gateway for the avenue. It highlights Gezi Park and further integrates the green space with the adjacent square.

The Republic Monument at the center of the square will also be more prominent with the new design while the trees will surround and criss-cross the square. A pedestrian bridge planned for the park will offer a view of Bosporus while connecting the square and park to Atatürk Cultural Center and Maçka Park. An amphitheater is planned for a section of the square, along with a new crossing to bus stops underneath the square. Another novelty is the extension of the nostalgic tram line crossing Istiklal Avenue to the area surrounding Gezi Park.

Taksim Square has undergone a major makeover over the past five years. The previous administration added more trees to the square located next to Gezi Park. Traffic flow was also rerouted.

Istanbul Mayor Ekrem Imamoğlu recently said at an event on the redesign of the square that the area had lost its historic fabric. He added that they aim to launch the redesign work next year.

"It is the first time Turkey launched a democratic process for the design of a place. We want to reshape these places with the participation of citizens and meet their demands in the best way possible," Imamoğlu said last month.