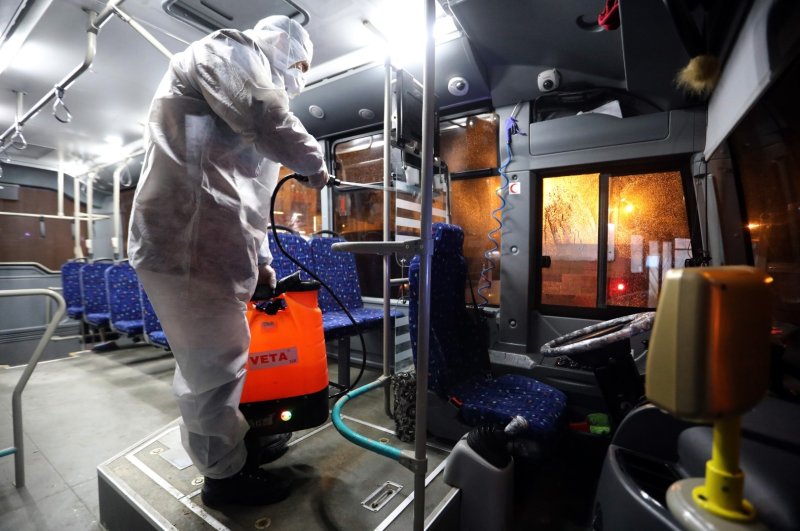 As cases of the coronavirus spread further, Turkey remains among the few countries in its region spared from COVID-19. Health Minister Fahrettin Koca, however, warns that the risk is greater than ever for Turkey and says the country will take heightened measures to ensure minimum impact

From Iran and Iraq to Greece, the coronavirus – or COVID-19 – is making its way around the countries neighboring Turkey, which connects Asia and Europe. The country has not yet reported a single case of the virus, but the government acknowledges the possibility of future risks and is ramping up measures, from flight bans to border closures.

Health Minister Fahrettin Koca said the heightened measures were in light of the high number of cases in Turkey's eastern neighbor, Iran. “We have to be in control,” Koca told Anadolu Agency (AA) in an exclusive interview Wednesday.

On Tuesday, Turkey brought a number of its citizens home from Iran on a specially arranged evacuation flight. The 142 people on board, including crew members, were all placed under quarantine in the capital Ankara.

None of the 142 people tested positive for coronavirus, the minister said in a separate press conference.

Panic has gripped the world in response to the lack of an effective treatment for the fast-spreading virus, which has brought about an equally rapid stream of fake news and false rumors. Turkish social media has also had its fair share of unfounded claims regarding a government cover-up of cases.

The Health Minister reiterated that there have been no cases in the country. “You can’t hide anything from the world, still less from the World Health Organization (WHO). You can’t say someone infected with the virus does not have it. You have to treat it and stop him or her from coming in contact with others; you have to prevent more infections,” he said.

Koca shared the opinion of the health community, which assesses that warmer weather will lead to a decline in the number of cases. “We want to keep Turkey away from the virus as long as possible though we cannot rule out any possibility. We see cases everywhere, in Europe, in Italy for instance, but they quickly took measures,” he said.

“The risk is here, at our doorstep. We saw it spread in the region, in Iraq, Israel, and Lebanon, from its hotbed in Qom, Iran. We have to confront it so it won’t spread across our borders,” he said.

Koca said any visitors who have been to Qom or Mashhad, two Iranian cities with reported cases, will be placed in quarantine automatically. The country also plans to set up field hospitals near the border to immediately quarantine anyone suspected of having coronavirus. It has also readied hospitals in eastern Turkey, which borders Iran, in order to boost quarantine measures. The health minister said they have placed at least 23 people, who recently visited Qom and Mashhad, in quarantine since last week.

Listing examples of Turkey’s preventative measures, Koca said he had personally intervened to stop an incoming flight from an unnamed country from landing, due to suspicious incidents aboard. “We did not even allow them to refuel and diverted it to another country in Europe. It was a Turkish Airlines (THY) flight with Turkish crewmembers. The crew were also not allowed back in Turkey and were instructed to spend 14 days of quarantine in the country where the plane landed,” he said.

Koca called on the public not to succumb to panic. “There is no virus here, and we have every equipment and staff to contain it if there is a case,” he said.

Turkey has already taken measures before the WHO declared an emergency on the issue. It set up a Science Board, a task force monitoring the developments regarding the virus and taking measures. It also designated some hospitals as specialized hospitals for quarantine measures.

Travel warning for Iraq and Italy

The Turkish Foreign Ministry Wednesday issued a travel warning for citizens planning to travel to Italy and Iraq. The ministry said in a statement that citizens were strongly recommended to avoid nonessential visits to regions in Italy and Iraq where coronavirus cases were reported.

The ministry called Turkish citizens, who are living in Italy or who were required to travel there, to take precautions for their health and follow the warnings and statements by Turkish diplomatic missions in Italy and WHO. For Iraq, the ministry advised citizens to stay away from areas with reported cases.

Media outlets also reported that the Turkish civil aviation authority suspended all flights, including private, cargo and charter flights, to and from Iran.