Millions of saplings set to be planted in international forestation campaign 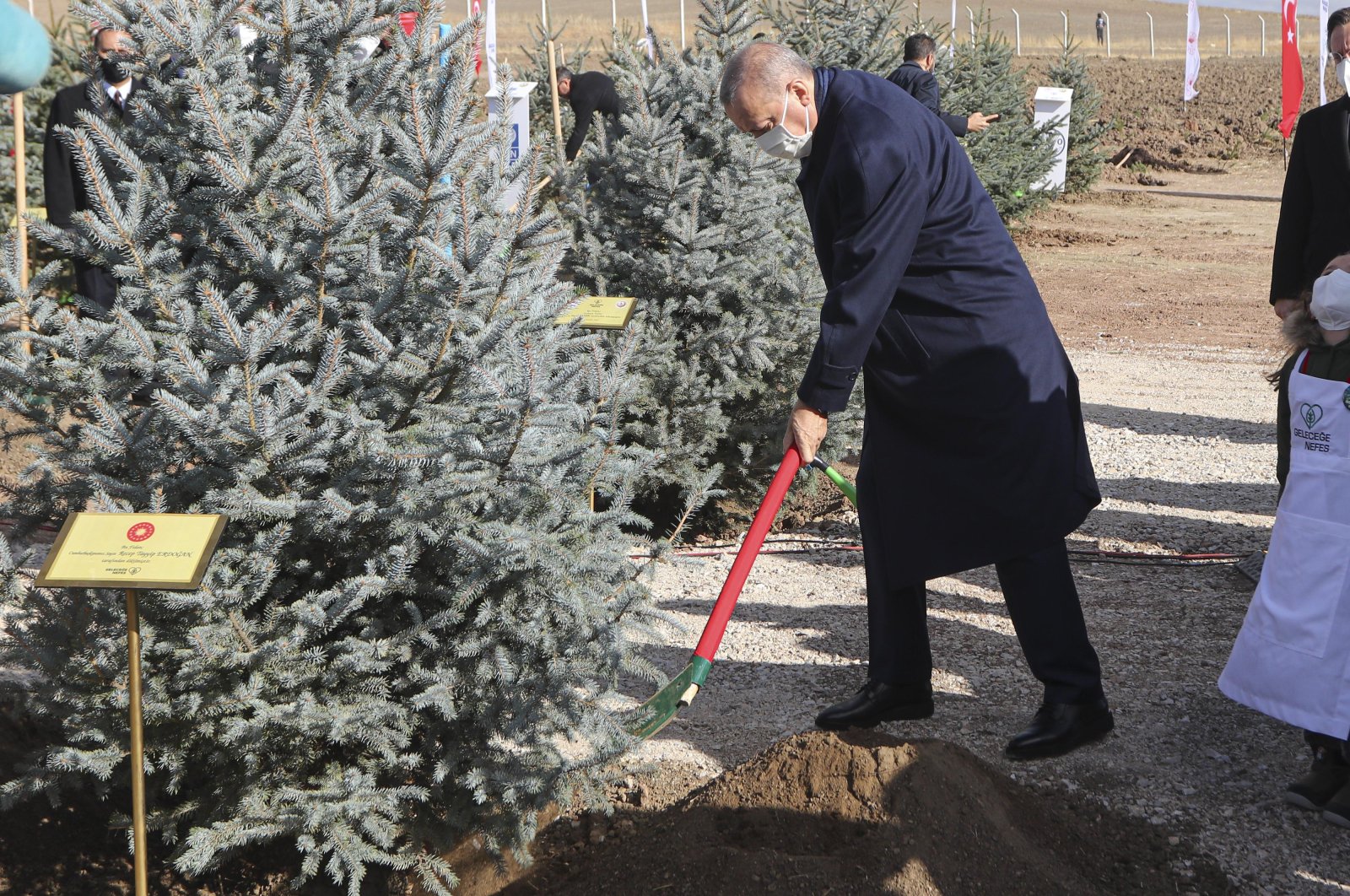 Turkey is one of the few countries that has been increasing its forests. It ranks first in Europe and fourth in the world in terms of forestation efforts, President Recep Tayyip Erdoğan said at the National Forestation Day ceremony held jointly with several other countries on Wednesday. Turkey's forestation efforts have grabbed the attention of the Organization for Economic Cooperation and Development (OECD) and the United Nations (U.N.), Erdoğan said, at the ceremony held in Yıldırım Beyazıt University in Ankara. He noted that Turkey is one of the rare countries that has increased its forests in the past 18 years.

On National Forestation Day on Wednesday, people all around Turkey and 30 other countries planted saplings to empty plots. The country set a new world record for planting the most saplings in an hour, with 303,150 saplings planted last year. Overall, nearly 14 million saplings were planted in the campaign held across Turkey. This year, the number was increased to 83 million, representing one seed for every member of the country’s population.

At 11:11 a.m., the planting of the saplings was officially inaugurated by President Recep Tayyip Erdoğan who was joined by other officials at the university campus. The president planted a sapling as part of the “Breath for The Future” campaign which was launched last year on Nov. 11 after a decree was passed in response to young YouTuber Abdullah Enes Şahin's suggestion of “a festival for planting saplings.”

“All saplings we planted last year substantially grew this year. Our mobilization for planting now spreads to the world,” Erdoğan said at the ceremony for planting in Ankara. “We are a nation friendly to the nature. We are members of a civilization promoting planting trees. As the late bard Aşık Veysel said, ‘my faithful beloved is black soil.’ Prophet Muhammad (peace be upon him) asked the faithful to protect the environment,” Erdoğan said. “Destroying the nature, damaging the trees is a betrayal to what Allah gave us. We have to give value to the nature it deserved. We have to inject the younger generations with the love for nature. We are implementing several projects to keep their love for nature alive and will deliver seeds to about 12 million children to that extent. Starting from 2021, by God’s will, these seeds which will turn into saplings will be planted,” he said.

“We increased our forests to 22.7 million hectares. In the last 18 years, we have planted 5.1 billion saplings,” Erdoğan added.

The Ministry of Agriculture and Forestry and the Turkish Cooperation and Coordination Agency (TIKA) joined forces this year to expand the scope of the campaign by including other countries. Saplings were planted in Bosnia-Herzegovina, Iraq, Libya, Malta, Montenegro, Kazakhstan, Georgia, Ukraine, Serbia to Afghanistan, Kosovo, Uzbekistan, Senegal and Albania among other places. The countries included in the campaign were chosen due to their suitable climates for planting saplings in November. Eighty-two saplings representing each province of Turkey and the Turkish Republic of Northern Cyprus (TRNC) were planted in the courtyard of Anıtkabir, the mausoleum of Mustafa Kemal Atatürk, founder of the Republic of Turkey, whose anniversary of death was marked on Tuesday.

Erdoğan joined leaders and officials from other countries via videolink for the planting of saplings during the ceremony in Ankara. He said that Turkey was going through its “golden age” in terms of sensitivity toward the environment in the past 18 years. “By the end of 2023 (centenary of Republic of Turkey), we aim to plant 7 billion saplings in total,” Erdoğan said. The president said they also work to expand the space and number of forests in cities. “We set up 136 city forests so far and we increased the number of national parks to 45 from 33 in 18 years,” he said.

The government sent seeds to households that requested them to plant outside their homes, in an effort to run the campaign in compliance with measures against the coronavirus outbreak and avoid people gathering at sites where mass planting is being carried out. Some 12 million students were also given seeds to grow their own saplings at home.

The Ministry of Agriculture and Forestry designated areas for planting for the campaign beforehand that include courtyards of schools, hospitals, places of worship, public spaces in villages, courtyards of public institutions and empty plots near residential areas.

Amid a construction boom and concerns over global warming, Turkey has stepped up efforts to preserve and expand its forests. It is also pursuing a campaign to boost the production of saplings and increase revenue from forestry products, namely fruit and honey production, for villagers. Thousands of forests were created in rural areas to generate extra income for farmers.

The mass planting of trees and the improvement of pastures are among the measures being taken against erosion and desertification, as part of an action plan by the government. Hundreds of thousands of hectares of land turn into desert every year due to poor irrigation. Officials say Turkey is among the countries most affected by the increase in nonarable lands and climate change, as it sits in a geographically challenging location sandwiched between different climates. More than half of Turkish soil has the characteristics of arid, semi-arid and semi-humid climates. Turkey's central and southeastern regions, known for vast flatlands and steep mountains, are particularly vulnerable to the risk of desertification. Erosion is another threat for Turkey, as most lands have an elevation far higher than countries in its immediate region or other European countries.

The country was already engaged in large-scale planting efforts by the government, but it expanded its scope and mobilized the public in 2019. Along with creating new forests, Turkey hopes to restore its forests that fell victim to fire. Last year, more than 47,000 acres of land were planted with a diverse array of saplings including spruce, cedar, black pine, scotch pine, birch, walnut, almond, mulberry, wild pear, rosehip, lavender and ash.