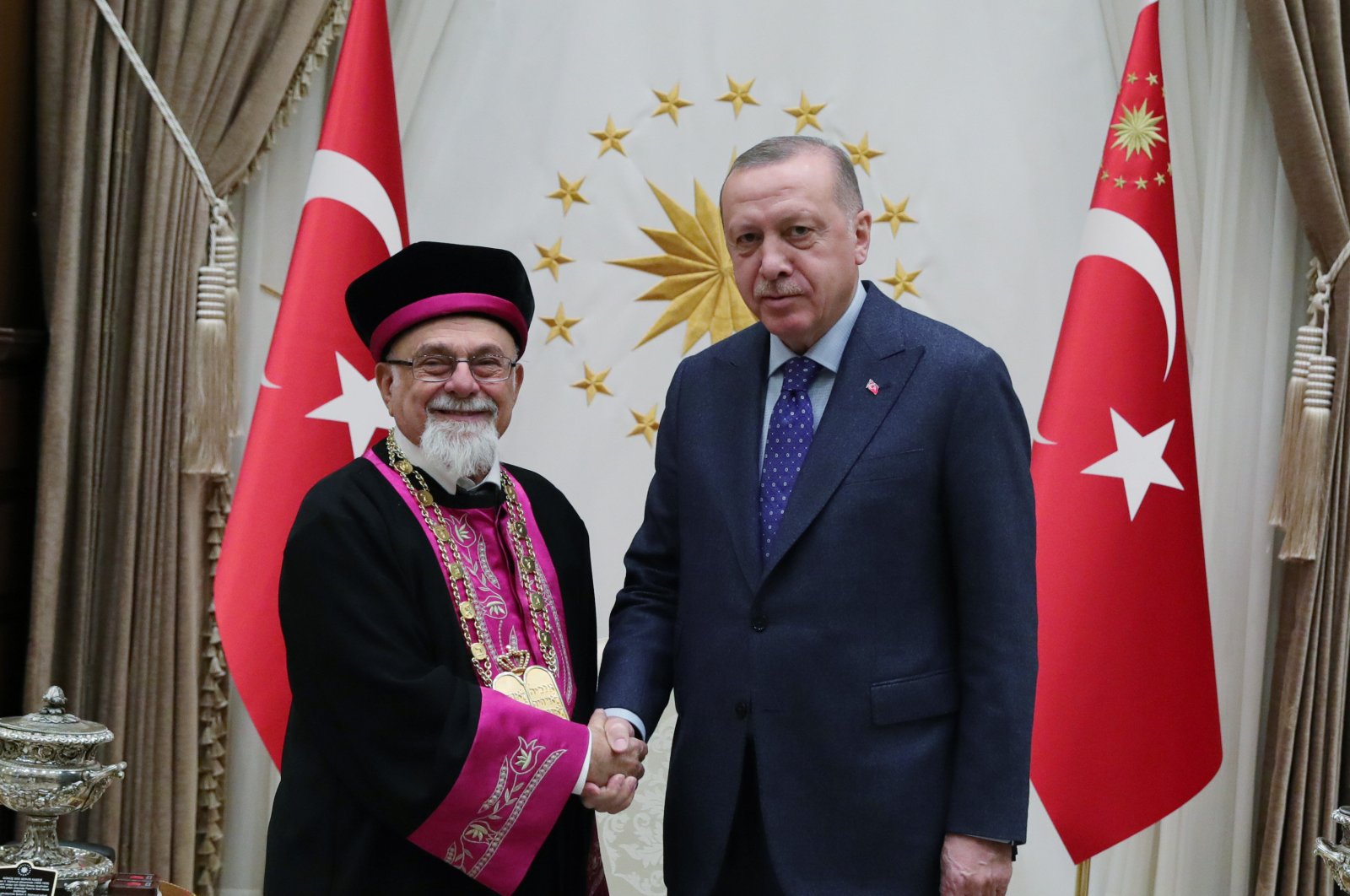 President Recep Tayyip Erdoğan shakes hands with Isak Helva, the chief rabbi of the Turkish Jewish community, on Jan. 31, 2020. (AA Photo)
by DAILY SABAH Apr 09, 2020 10:57 am
Edited By Can Kazancıoğlu

President Recep Tayyip Erdoğan thanked representatives of Turkey’s religious minorities for providing support to the nationwide fundraising campaign to help families affected by the coronavirus outbreak as people from all parts of society unite to relieve the negative affects of the pandemic.

Haleva announced that he donated five months of his salary to the campaign, while Kohen donated TL 1.2 million ($177,000).

The patriarchate announced a TL 300,000 donation while the foundation which runs Syriac churches donated TL 100,000 for the “We are Self-Sufficient” campaign launched by the Turkish Presidency.

After Erdoğan's announcement, people from all walks of life across the country rushed to contribute. At least TL 240 million was donated to the campaign, which began with Erdoğan himself donating seven months worth of his personal salary. Top public lenders Ziraat and Vakıfbank announced a donation of more than TL 11 million on Tuesday and Wednesday, while major telecom provider Türk Telekom contributed TL 40 million. Supreme Court President Mehmet Akarca also announced Wednesday that he had asked every judge and prosecutor to donate at least TL 1,000 for the campaign. Stock exchange Borsa İstanbul announced a contribution of TL 5 million.

While the struggle against the novel coronavirus relentlessly continues in Turkey, the number of people who succumbed to the disease has risen to 812, Health Minister Fahrettin Koca said in a tweet late Wednesday, with recoveries also on the rise.

The number of total cases also surged, reaching 38,226 from Tuesday’s toll of 34,109. Koca urged people to abide by the rules of self-isolation and emphasized the importance of staying home amid the pandemic.

However, the number of people who recovered from the disease raised hopes as it topped 1,846.

One of those recovered patients was 55-year-old chronic obstructive pulmonary disease (COPD) patient Süleyman İpbüken, who was released from a hospital in southeastern Turkey after overcoming COVID-19, the disease caused by the novel coronavirus, on Thursday.

İpbüken was taken to the hospital on March 23 due to a high fever. His first coronavirus test came back negative, but he was kept under close observation as a possible case. His second test came back positive. Leaving the hospital, he thanked all the medical staff who helped him recover.

Respiratory problems including COPD can prove lethal for COVID-19 patients.

"I also have diabetes," said İpbüken, who will continue to stay at home under quarantine, adding that he would like to be a convalescent plasma donor if possible.

On the other hand, daily coronavirus infections in Turkey – the world's seventh worst-hit country by the number of active cases – have risen for the ninth consecutive day. Suggesting that curfew measures for people aged under 20 and 65 and over have yielded results, the minister had previously said new infections were now mostly seen in people between 20 and 65.

The minister also dismissed rumors of a high mortality rate for patients under the age of 60, noting that only 10% of cases under 60 – excluding those with preexisting conditions – died due to COVID-19. Koca also announced that a new mobile application has been developed to monitor infected patients and their mobility.

Coronavirus also hit Turks living abroad, especially in Europe. Diplomatic sources said on Wednesday that the novel coronavirus has so far killed 222 Turkish citizens living abroad. A total of 74 in France, 46 in Germany, 37 in the Netherlands, 19 in the U.K., 18 in Belgium, 10 in the U.S., 10 in Sweden, four in Austria, three in Switzerland, and one in Lebanon died from the virus.

Also, 360 Turkish citizens, who came from Qatar on April 7, were taken under a 14-day quarantine in student dormitories in central Aksaray province.

Turkey has lifted quarantine measures on six areas in five provinces, while 156 others remain in isolation, the country's Interior Ministry announced Wednesday.

As of 4 p.m. (1 p.m. GMT) Wednesday, two district centers, six towns, 92 villages, 47 neighborhoods and nine hamlets across 45 provinces were still under quarantine, the ministry said in a statement.

No fee for coronavirus treatment

For more convenient treatment for citizens, the Social Security Institution (SGK) included coronavirus treatment in “emergency situations” on Thursday. According to the amendment, hospitals will not be allowed to receive any payment for coronavirus diagnosis and treatment.

The definition of an emergency situation was redefined as covering “circumstances that require medical involvement in the first 24 hours following the sudden diseases, accidents, injuries and similar situations, or situations that are considered to be risky in case of transferring to another health care institution, or diagnosis and treatments for pandemic cases.”

Worldwide, more than 1.3 million people have been infected with the virus and over 75,000 have died, according to Johns Hopkins University. The true numbers are almost certainly much higher, because of limited testing, different rules for counting the dead and deliberate underreporting by some governments.