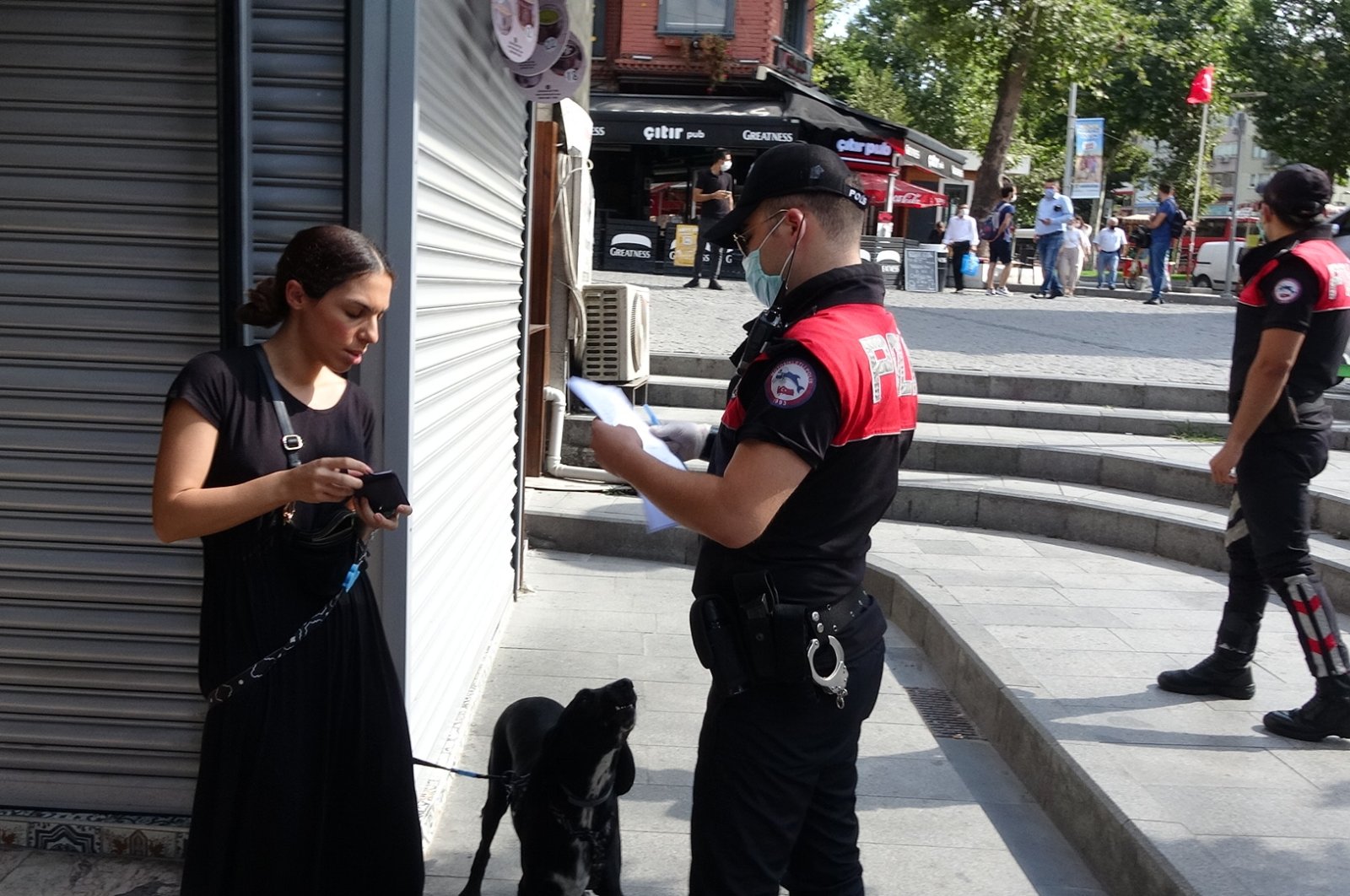 From governors to gendarmerie commanders, administrators and security officials in 81 provinces of Turkey toured their area of responsibility on Thursday in mass inspections looking to catch violations of rules to stem the COVID-19 outbreak. In simultaneous inspections, crews of law enforcement checked whether the public and businesses were observing the virus-related requirements. Those not complying with rules such as wearing protective masks and maintaining a social distance of at least 1.5 meters (5 feet) were warned and fined.

The mass inspection comes at the heels of new measures announced by the Interior Ministry on Tuesday. The measures are a consequence of concerns over a new surge in cases as the sight of people ditching masks and central hubs once again becoming overcrowded became common in recent days. Turkey managed to bring down the high number of cases, but the Health Ministry repeatedly warns the public not to drop their guard even if the number of daily cases is lower than before.

Inspections showcased the effectiveness of the enforcement of regulations, while excuses ran aplenty for those not observing the rules. Teams of inspectors found citizens conveniently tucking masks into their handbags or pockets, only to rush to wear them when seeing inspectors. Some claimed they had to remove masks because the weather was too hot while others claimed they wouldn’t “be recognized” when they wore masks. Authorities issued fines for those not wearing masks, along with a gift: a brand-new mask. “I had to use the mask to remove the excrement of my dog on the ground,” a woman walking her dog in Istanbul’s Beşiktaş district told inspectors. She could not dodge the TL 900 ($124) fine. Ömer Karataş was walking with his mask wrapped around his wrist. “I was passing through an empty street. I always wear my mask when I am in a crowd. My father is a doctor, and I follow the rules,” he told the inspectors who fined him.

Interior Minister Süleyman Soylu joined a team of inspectors at a marketplace in the capital Ankara’s Mamak district. Speaking to reporters there, Soylu said rules were “not that complicated.”

“Wearing masks, keeping our distance and hygiene. We have to be careful about following these in marketplaces, shopping malls, wedding parties and anywhere with social life,” he said. “Our law enforcement work (to curb the pandemic). Adopting the rules is not only the state’s responsibility but the individual responsibility of each of us. People should not complain. For example, if a vendor here in this marketplace asks you not to touch fruits and vegetables, you have to comply. If a policeman tells you to wear a mask, you should not get annoyed. Rules are not something for the good of one but for the good of the whole nation,” Soylu said. The minister said about 250,000 inspectors were in the field on Thursday.

The minister said Turkey suffered much in the first days of the pandemic and would face “a great problem” if it returns to those days. “We were sad as senior citizens were confined to home. We were sad when shopkeepers had to shut down their shops. We have to be careful so it won’t repeat,” he said, referring to the curfew for senior citizens and the closure of some businesses. On the other hand, Soylu ruled out a return to weekend curfews, saying, “it is not on our agenda.”

In a circular to the governorates of 81 provinces, the Interior Ministry has called for “one-on-one monitoring” for people who have been required to self-quarantine, especially in the first seven days of isolation. The ministry warned it would not accept any violations of the obligation to wear masks and maintain social distancing at gatherings such as weddings or circumcision ceremonies, on pain of fines and temporary closures. It said gatherings after funerals would be restricted. To encourage precautions, businesses and transport services that meet safety requirements would be awarded a “safe space” logo after three inspections, the ministry said. The ministry also said contact tracers would be assisted by law enforcement in urban and some rural areas, or by teachers and imams elsewhere.

Turkey has run over 5 million coronavirus tests since the outbreak of COVID-19 in the country in early March, the health minister announced Wednesday. Health care professionals conducted 53,842 tests for COVID-19 between Tuesday and Wednesday, raising the tally to over 5.02 million, Fahrettin Koca said on Twitter.

Citing Health Ministry data, Koca said that 1,178 more people contracted the coronavirus in the past day, bringing the total number of cases nationwide to 236,112.

The country's death toll from the disease rose to 5,784, with 19 new fatalities registered as of Wednesday.

Since the normalization process which saw the reopening of businesses and lifting of weekend curfew began at the beginning of the summer, Fahrettin Koca and other top officials repeatedly warned the public to adopt a “controlled social life.” However, authorities had to enforce a TL 900 fine previously seldom issued when cases related to mass gatherings and disregard of rules increased. Mask wearing requirements were also introduced, particularly in big cities.

A report in the Hürriyet newspaper said authorities are working on measures specific to areas with a high number of cases. These will include mass quarantines and curfews particular to districts or neighborhoods where isolation measures do not yield the expected results. Beaches, which have seen large crowds of swimmers getting too close to each lately, will also face further inspections and will be sealed off if beach operators fail to ensure COVID-19 rules. The newspaper report says authorities also mulled tighter measures for those ordered to self-isolate after testing positive. Those violating self-quarantine rules will face prison terms up to one year for endangering public health.

In the central city of Konya, the local pandemic board decided to ban entry and exit for people testing positive at checkpoints set up by authorities outside the city. People traveling to the city or those leaving Konya will be asked for a Hayat Eve Sığar (HES) code, a code assigned by the Health Ministry to each citizen which allows tracking of COVID-19 patients. People with a record of COVID-19 connected to their HES code will not be allowed to leave the city.