No omicron in Turkey so far, Health Minister Koca says 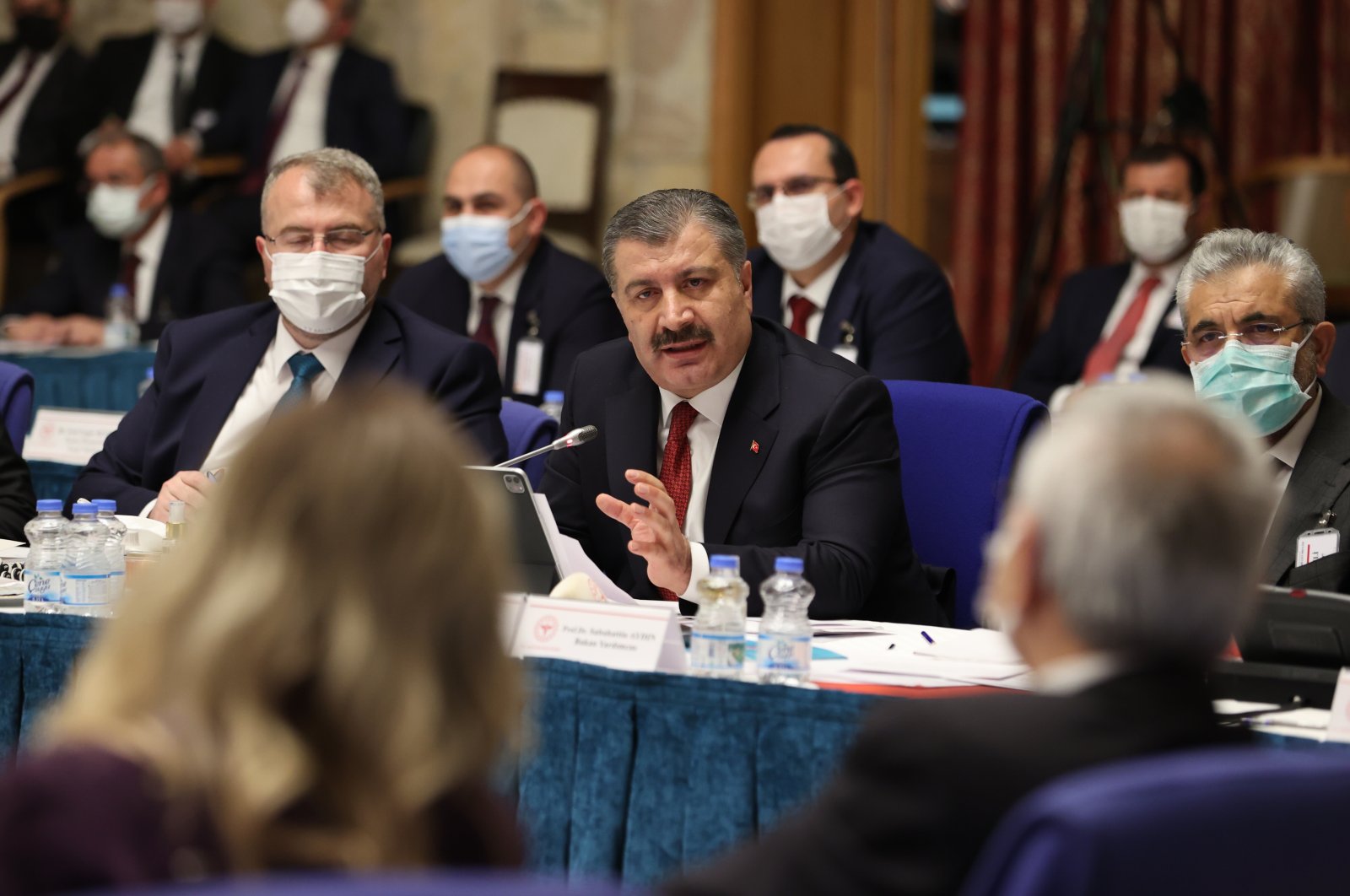 Health Minister Fahrettin Koca clarified that there were no cases of the omicron COVID-19 variant in Turkey yet and with the tried-and-tested measures of masks and social distancing, the harsh winter season could pass smoothly

There have been no cases of the omicron variant of COVID-19 in Turkey so far, Health Minister Fahrettin Koca stated late Wednesday after the Coronavirus Scientific Advisory Board's videoconference meeting.

Koca released a written statement after the meeting and said that the board gathered to discuss several topics on the agenda, including the omicron variant that emerged in South Africa, the vaccine program, the course of the pandemic and the Turkovac COVID-19 vaccine.

Koca noted that South Africa possessed a commendable screening infrastructure through which it was able to detect and identify the new variant and that it was extremely valuable for it to share the finding with the world quickly.

The minister said that the Scientific Advisory Board, the General Directorate of Public Health and monitoring centers continued to meticulously monitor new variants among the public in Turkey and their effects on the course of the pandemic.

Koca emphasized that the emergence of new variants was expected and that there were no new or worrying developments.

“It has been understood that the new variant has mutated in more than one gene region of the virus. According to preliminary information, the omicron variant is transmitted more rapidly. However, there is no evidence that shows it causes more severe sickness,” Koca stated.

“Mutations are expected for RNA viruses, but the strengthening and disappearance of the virus are also associated with mutations. We hope that this mutation is a sign that the virus will disappear, never to return.”

Koca said that they were cautious nonetheless and were on the lookout for variants. “Gene sequencing studies have been increased in our reference laboratories due to the omicron variant. The data obtained in our 17 regional laboratories has been analyzed by gene sequencing method in our Ankara central reference laboratory. The omicron variant has not been seen in our country so far.”

Koca noted that Turkey had taken swift measures once the variant emerged around the world by barring travelers from specific high-risk countries that had detected cases or had contact. Koca stated that there was no situation that required new measures to be taken at the moment and that the process was being followed closely.

“An evaluation has also been made on the effectiveness of vaccines against the new variant. Considering that vaccines are used in combinations in our country, we have some important advantages. New studies in the literature and real-life data collected by our ministry reveal that the use of mixed vaccines provides superior protection.

“It is extremely important for our citizens to get their vaccinations,” Koca emphasized.

He pointed out that the most powerful measures against the unknown aspects of the omicron variant were still social distancing and the use of masks.

“The time spent in closed environments has increased with the winter season. We should stay away from closed and crowded environments with limited ventilation unless it is essential for our health,” he warned.

The minister also touched upon the progress of the COVID-19 vaccine Turkovac developed in Turkey. He noted that the vaccine had applied for emergency use approval to the internationally recognized regulatory authority, the Turkish Pharmaceuticals and Medical Devices Agency.

“I would like to announce the good news once again and say that if approved after completing its evaluation by the institution's relevant experts and scientists, our domestic vaccine will be widely distributed by the end of the year.”

It has been a cooperative effort between the Presidency of Turkish Health Institutes (TÜSEB) and Kayseri Erciyes University.

Meanwhile, professor Tevfik Özlü, a member of the Coronavirus Scientific Advisory Board, echoed Koca's statements as he said that caution was still necessary, particularly in closed environments.

“The winter season has arrived,” he said and added: “We have to spend more time indoors at offices and workplaces. The burden of public transportation has increased ... We need to be very careful in that respect.”

Özlü noted that it was possible that the omicron variant could reach Turkey.

“Therefore, we have to be even more careful. So, as we have always said before, we should stay clear of going into crowded places as much as possible. We should definitely wear our masks in social areas and keep our distance from other people.

“If we pay attention to these, we can protect ourselves and get through this season without encountering a big wave. Compared to previous years, we have a stronger trump card: vaccines.”

Özlü also stated that the grass will be greener once winter comes to an end.

“In Turkey, approximately 60% of the population has had two doses of vaccines. This means that an important immunity has been achieved. Diseases can also be seen in those who have been vaccinated, but severe illness and death are not common.

“We are in a better situation in that respect. We can manage the disease better with milder cases. All over the world, death rates have decreased, rates of serious diseases have decreased. New drugs are now coming into play, and I believe they will strengthen us in treatment,” he said.

“That's why we need to be a little more patient. If we can get through the winter period, I think we will be able to progress toward next summer more easily."