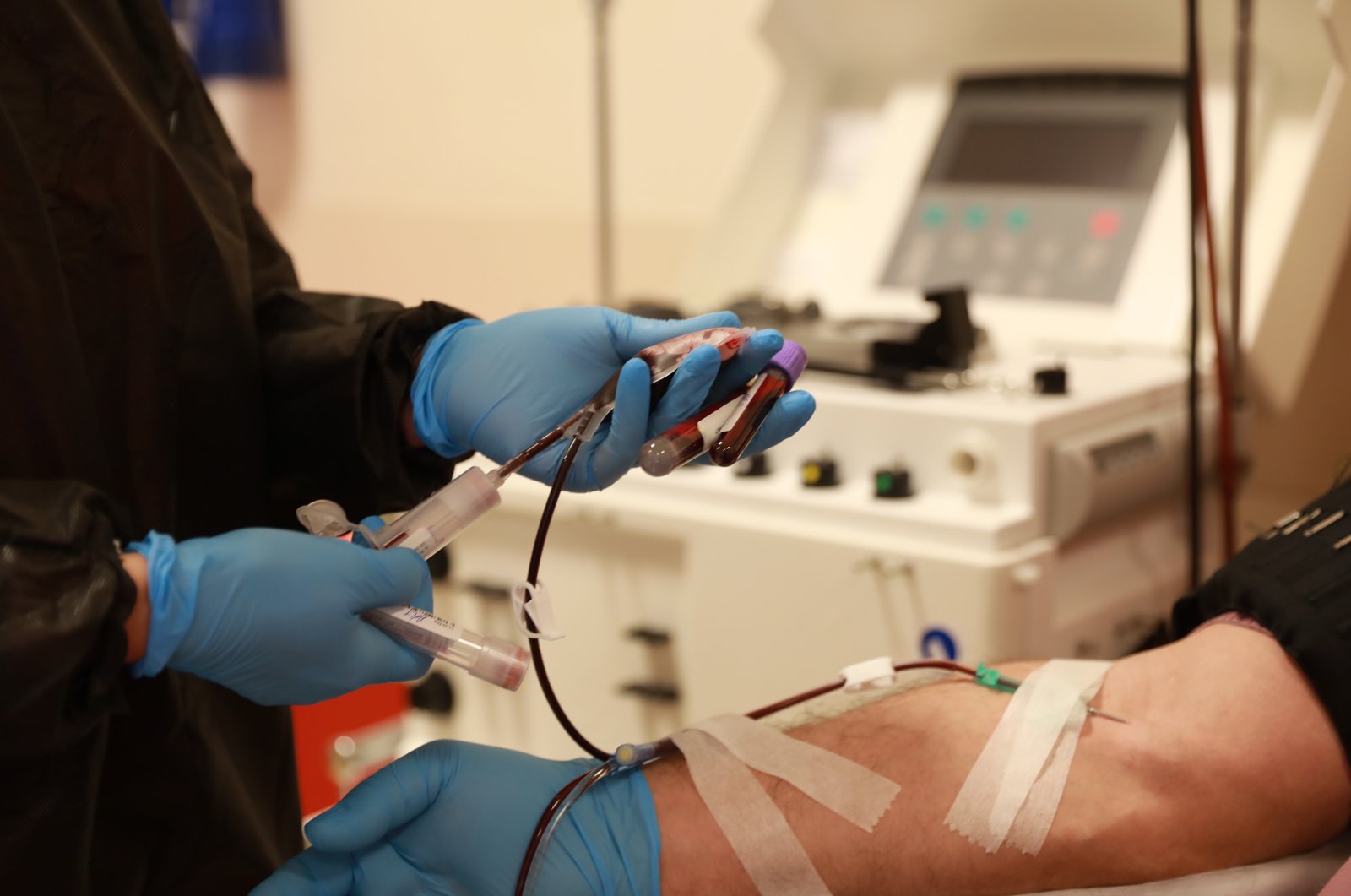 A man who recovered from COVID-19 donates blood for plasma therapy at a Turkish Red Crescent Center in this undated photo. (AA Photo)
by DAILY SABAH May 18, 2020 2:23 pm
RECOMMENDED

Turkey has so far collected 5,000 units of plasma compound from the blood of COVID-19 survivors, with Turkish Red Crescent alone gathering 80% of those from donors, the organization said Monday.

Saying that more than 3,500 Turkish Red Crescent workers were assigned to plasma collection teams across 14 provinces, Kınık said the organization reached out to nearly 16,000 COVID-19 survivors to inform them about donating plasma.

According to Kınık, the first donation was made on April 7 by a doctor who contracted the coronavirus, and the Turkish Red Crescent has since confirmed 4,236 people eligible for donation after testing them.

“Around 95% of those we tested agreed to be donors. As of now, 1,275 people donated plasma to the Red Crescent. Some of our donors have donated more than once. Apart from the Red Crescent, 427 people have also donated to research hospitals across the country, and around 1,000 units of plasma were created from those donations,” he said.

Amid the organization's efforts to help virus patients, it has been struggling to convince people to donate plasma or blood. Fearful of contracting the virus, Turkish citizens have been shying away from any clinics or health-related workplaces. Despite assurances from Kınık that the donation centers follow all mandatory precautions and carry out daily disinfection, the organization has failed to entice people to donate and has seen its blood supplies drop to critical levels.

It went as far as offering medals to whoever donates blood for plasma therapy. The donations only picked up after the Health Ministry declared the outbreak was under control with a falling number of new cases.

Explaining that plasma treatment should be regarded as more of a complementary therapy to accompany conventional treatment, Kınık said a virus patient has to wait 14 days after testing negative for the virus before donation can take place.

The organization began the plasma extraction process and the ensuing treatment during the height of the outbreak in Turkey. When first announcing plasma therapy would be used for coronavirus patients in April, Kınık had said the treatment was a century-old practice but it still showed promise nonetheless.

Using blood donated by patients who have recovered from COVID-19, medical experts hope that the serum therapy, tried more recently against SARS and Ebola, will offer effective treatment for the sick and temporary vaccine-like protection for health care workers and those with weak or suppressed immune systems.

The therapy tests if giving infusions of survivors' antibody-rich plasma to COVID-19 patients who have been intubated in intensive care units and have begun to show alveolar damage or those having trouble breathing would boost their own body’s defenses to help fight off the virus.

Plasma works using the same principle as a vaccine but unlike a vaccine, any protection would only be temporary and offer passive immunization. A vaccine – which contains weakened or inactivated viruses and bacteria or small parts of them – trains people’s immune systems to make their own antibodies against a target germ. When these germs enter the body again, the immune system now knows how to deal with or defeat them. The plasma infusion approach similarly gives people a temporary dose of someone else’s antibodies that are short-lived and require repeated doses.