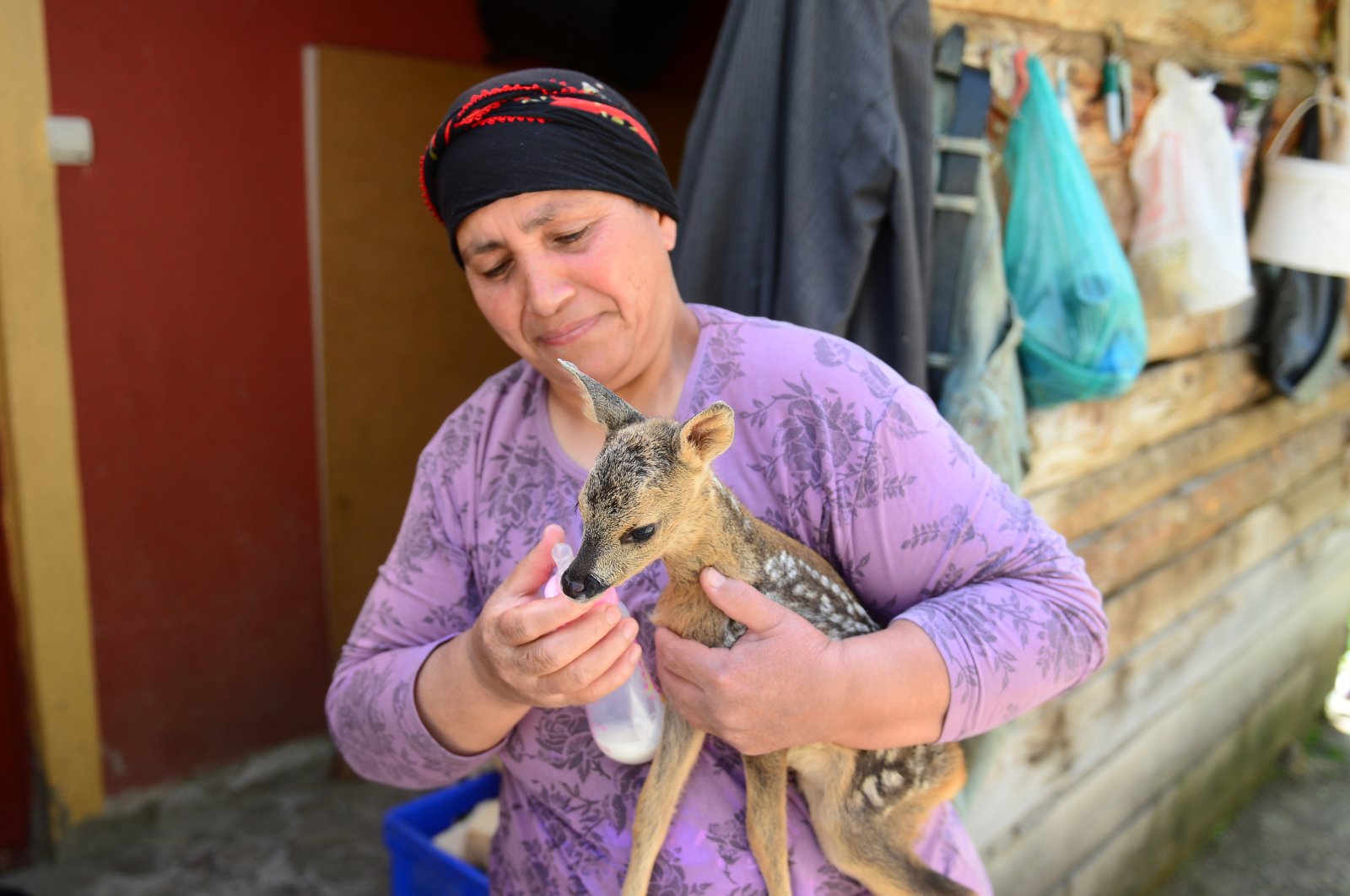 Nimet Dizdar feeds milk to a fawn in this undated photo taken at her home in Giresun, Turkey. (AA Photo)
by DAILY SABAH May 22, 2020 12:00 pm
RECOMMENDED

Nimet Dizdar is a mother of two but her compassion for roe deer fawns has made her an unlikely foster parent. Dizdar, who lives in a village in Dereli in the Black Sea province of Giresun, volunteered to care for the orphaned animals, having over the years looked after 35 fawns whose mothers had died.

It all started when she spotted a lonely fawn roaming around her house in her village of Sarıyakup in 2012. Dizdar took care of the bewildered doe for months before handing her to a wildlife rehabilitation center. She later applied to a local branch of Nature Preservation and National Parks Directorate to volunteer to help preserve the roe deer endemic to the region. Since then, she has tended orphaned fawns found in the countryside by locals and regularly cares for animals in need found by the directorate. Once they reach adolescence, Dizdar delivers them to a wildlife rehabilitation center.

Dizdar traces her love for roe deer back to her childhood, telling Anadolu Agency (AA) it was a dream come true when their numbers started to increase in the region.

The responsibility is not easy, but Dizdar has learned a thing or two over the years.

“The trust is very important. They have to trust you, so they should know you will not abandon them. I always spend time with them. Even if I have chores, I have to work in the field, I come back to them every hour. They need to be fed five times every day. They are fawns, and they mostly need milk. You cannot feed them raw milk. so I always heat it up. If you feed them raw milk, they can catch diarrhea and even die,” she says. “It is all about love and hot milk,” she jokes.

And her efforts have paid off. “They call for me like I'm their mother when I am not around. You can hear them making noises when I am not with them, and they go quiet when I arrive,” she says. Indeed, she says she has bonded with the animals like a mother and her children. “I feed them milk with a feeding bottle while cuddling them. If anyone else tried, they wouldn't drink it. They sense my scent, and if they smell someone else, they know there is a stranger around. They don’t go near strangers,” Dizdar says.

“No money in the world could buy the love I feel for them. I want to care for them as long as I can. I see them frolic in the house, and it feels so pleasant. It is sad to part ways with them, but I know they will be safe wherever they go,” she says.

Ali Hıdır, head of the local branch of the Nature Preservation and National Parks Directorate, says orphaned fawns cannot be released into nature as they cannot survive without their mother. “Mrs. Nimet helps their survival. No matter how much you feed them, these animals can die of extreme stress in the absence of their mother. They feel safe with Mrs. Nimet,” he says.

Hıdır says roe deer generally gives birth to two fawns in one instance and avoid humans. “If they are confronted, they feel they are in danger and often abandon one of their fawns. They later return to retrieve the fawn,” he says. Hıdır says the public should not approach lone fawns. “People think they are abandoned and ‘rescue’ them. We urge them to leave the fawns alone so their mother can return and take care of them. Once they are taken from their natural habitat, their survival rate is low,” he says.