Sam the commuter dog travels throughout Izmir on mass transit 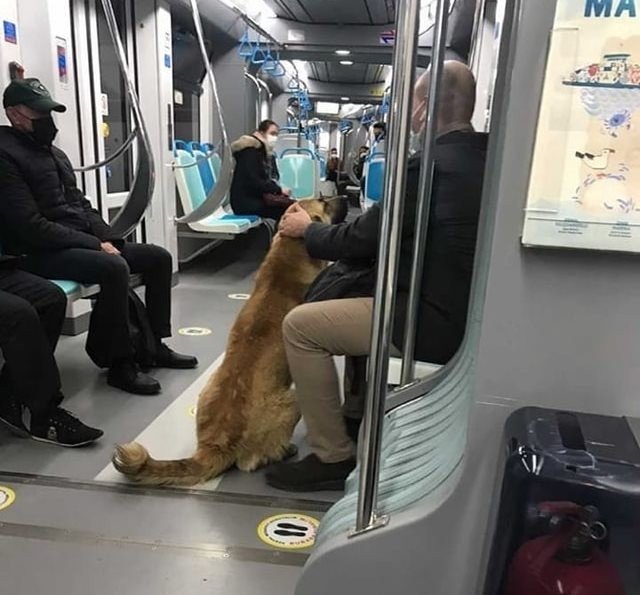 This undated social media post shows Sam the dog on the Halkapınar-Fahrettin Altay tram in Izmir, Turkey. The image was provided on April 12, 2021. (IHA Photo)
by Daily Sabah with IHA Apr 12, 2021 11:43 am
RECOMMENDED

A stray dog documented to have used different modes of mass transportation throughout the western city of Izmir created a buzz among social media users and activists who hoped to locate the animal and send him back to his usual neighborhood.

Sam the dog used to live in the neighborhood of Bostanlı in the Karşıyaka district and was a familiar stray dog for activists and residents who regularly enjoy the waterfront area. Some 1.5 months earlier, a resident took the ferry from Bostanlı to Konak across the Gulf of Izmir alongside Sam, sharing a picture of the animal on the ferry on social media.

People and activists who knew Sam were worried that the animal might run into trouble for being away from its usual environment and tried to find the dog in the Konak quarter but to no avail. Upon searching through various social media posts during the day from people who took the pictures of the dog, it was found that Sam had taken the metro, the IZBAN suburban rail, tram and bus, possibly in a bid to return to his regular neighborhood.

Acting upon posts of passengers who last saw Sam on a different transport medium and spot, activists mobilized on social media and conducted searches in neighborhoods where the stray was last seen. Sam was finally found in Bayraklı district 1.5 months after he took the ferry and was brought to his former neighborhood.

Activist Elif Elçin told Ihlas News Agency (IHA) that Sam was already known as a free-spirited animal, but his citywide journey was a surprise for people who looked after the dog. "Sam accompanied an animal lover who walked with him to Bostanlı Pier and then took the ferry. Unfortunately, this person left Sam in Konak," Elçin said, describing the incident as irresponsible. "If that person had helped Sam for the return journey, things wouldn't have gone this far," she added.

Elçin explained that they worried about Sam as dogs have their own areas and do not want other dogs there.

"When this person shared the images on the ferry, we looked for Sam in Konak the same day but couldn't find him. I assume Sam tried to return to Bostanlı as he was in an unknown area. We shared images of Sam on social media over the past 1.5 months and received multiple responses. Sam was seen on various types of mass transport. Images came from the metro, tram, bus and IZBAN," the activist said.

Elçin added that the time between the last sighting of Sam and when the social media post started to gain ground was extensive, but they started to finally get notifications when posts about Sam increased. The animal has since been nicknamed "Turist Ömer," (Ömer the Tourist), after a famous comedy character from the 1960s portrayed by late actor Sadri Alışık. Some users with a sense of humor suggested that Sam should be issued a mass transport pass.

"Once, we got information that Sam had arrived in Karşıyaka with IZBAN but had somehow taken the train again back to Alsancak. From social media posts, we last heard that Sam was in Bayraklı, and since it was a recent post, one of our friends who tended to Sam, Ebru, departed for the area immediately and found him after a 1.5-hour search," Elçin said.

"We are relieved to see Sam strolling around in his regular neighborhood. Now that he's used to mass transport, we hope he won't be using it again any time soon," Elçin said.