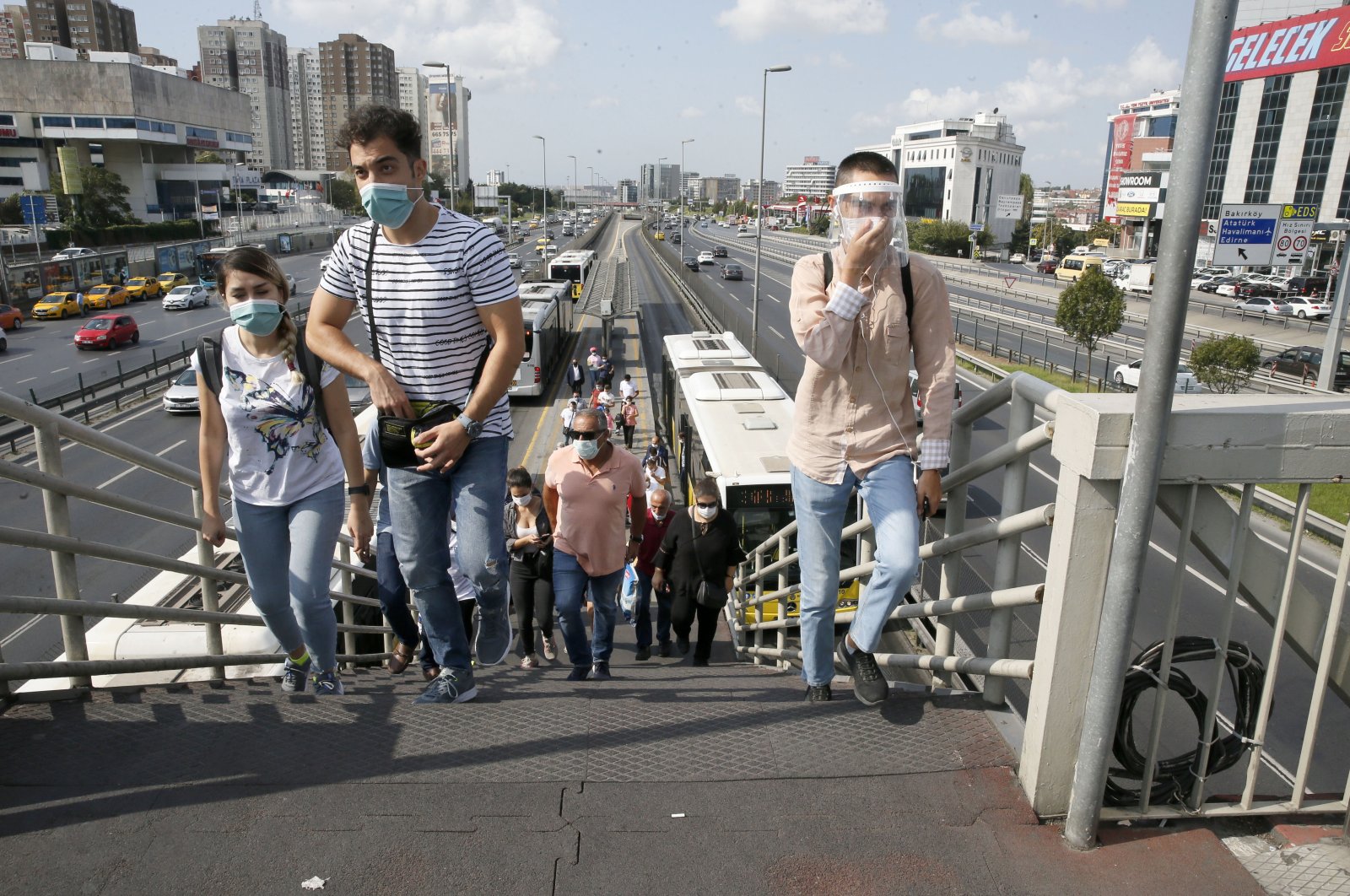 With the “new normal” in full swing, Turkey is introducing fresh methods for controlling social life amid the COVID-19 outbreak. The prevention of crowds, especially in mass transit, is among authorities' top priorities, as people return to work following the summer holiday. The governorate of the capital Ankara introduced new working hours for public sector agencies last week to prevent clusters of employees from being in the office at the same time. Istanbul, the country’s most populated city, is considering a similar measure to relieve packed mass transit vehicles of their burden.

The changes in scheduling come after a presidential decree in late August allows authorities to implement new work methods, such as telecommuting from home and flexible shifts. In Ankara, where virus cases surged in recent weeks, staff at public agencies can now work 8 a.m. to 5 p.m., 8:30 a.m. to 5:30 a.m., 9 a.m. to 6 p.m. or 10 a.m. to 7 p.m.

A similar change is under consideration for the metropolis, Mustafa Ilıcalı, the head of the Mass Transportation Scientific Advisory Board of Istanbul’s governorate, says. Speaking to Demirören News Agency (DHA) on Monday, Ilıcalı said schedule changes are being mulled both for the private and public sectors. He aired concerns about the frequent use of mass transit by commuters, of which private-sector employees constitute 60%. The governorate plans to discuss flexible working hours with private industry representatives, he said.

Mass transit use increased after Turkey's normalization process was kicked off in June. The government recently ordered the number of standing passengers taking mass transportation to be limited in a bid to reduce clusters of people. “The number of passengers dropped to hundreds of thousands from millions in the early months of the pandemic, but they rose again after normalization,” Ilıcalı remarked. “Mass transportation capacity is inadequate, especially during peak hours. We have to reduce demand. We see some 500,000 people take the metrobus daily, for instance. Some 50,000 people ride mass transit between 8 (a.m.) and 9 (a.m.) and another 50,000 take mass transit between (5 p.m.-6 p.m.). There is a need to decrease the numbers in those peak hours. Numbers can be reduced to as low as 20,000 by changing work schedules, and social distancing can be maintained,” he said.

Turkey recorded 1,527 new COVID-19 cases and 57 deaths in the past 24 hours, Health Minister Fahrettin Koca said Sunday. Some 96,097 tests were conducted and 1,102 patients recovered in the past day. “The virus is separating us from our loved ones. The only way to put an end to this is by fighting in unity and cooperation,” Koca said, as he urged everyone to take precautions and prevent the spread.

A new survey by Ipsos research company indicates that the majority of the public endorses lockdowns. Turkey lifted weekend curfews a few months ago following a drop in cases, but the “second peak of the first wave” as the health minister described it, raises concerns. The survey, reported by the Milliyet newspaper, shows 87% of interviewees supported the idea of new curfews, not just for specific provinces but for the entire country. The survey also delves into mass transit use and found every one in two people takes mass transit, but the majority is scared of infection. Some 43% of interviewees say they do not feel “comfortable” while taking mass transit because they worry about the high risk of infection in those vehicles.

On the other hand, the public does not seem concerned about the reopening of schools on Sept. 21 for in-person classes, as six out of 10 interviewees say they will send their children.

The repeated warnings of authorities to the public to comply with social distancing, mask requirements and hygiene standards sometimes fall on deaf ears. Fines and inspections occasionally work, but cautionary stories are perhaps the best way to daunt reckless citizens.

Yıldıray Çete, who works at the emergency medicine department of Akdeniz University in the southern province of Antalya, says most patients regret the actions that led to their contracting the disease. Among the major causes of mass infections are gatherings that fail to exact measures, especially wedding parties, funerals and spectacular send-off ceremonies for new conscripts. Doctors say some patients have trouble accepting their situation while others seek to escape from hospitals where they were admitted for the coronavirus. They recount stories of patients crying while explaining how they were infected. Among them is a 44-year-old patient who was infected while attending a funeral and members of five families who convened for a dinner at a restaurant. Çete remembers a young woman who confronted them before a COVID-19 test. “We tried to get her to the space allocated for coronavirus patients. She was holding the door, clinging to stretchers and resisting us. She was screaming and did not want to go in there. In the end, she tested positive. I was worried she would infect the staff here because she was grabbing them,” he says.

Çete says that the majority of his patients were those who ignored the rules. “Everyone regrets their actions. They wish they did not go to that gathering or that dinner. You can see it in their face,” he told Anadolu Agency (AA).