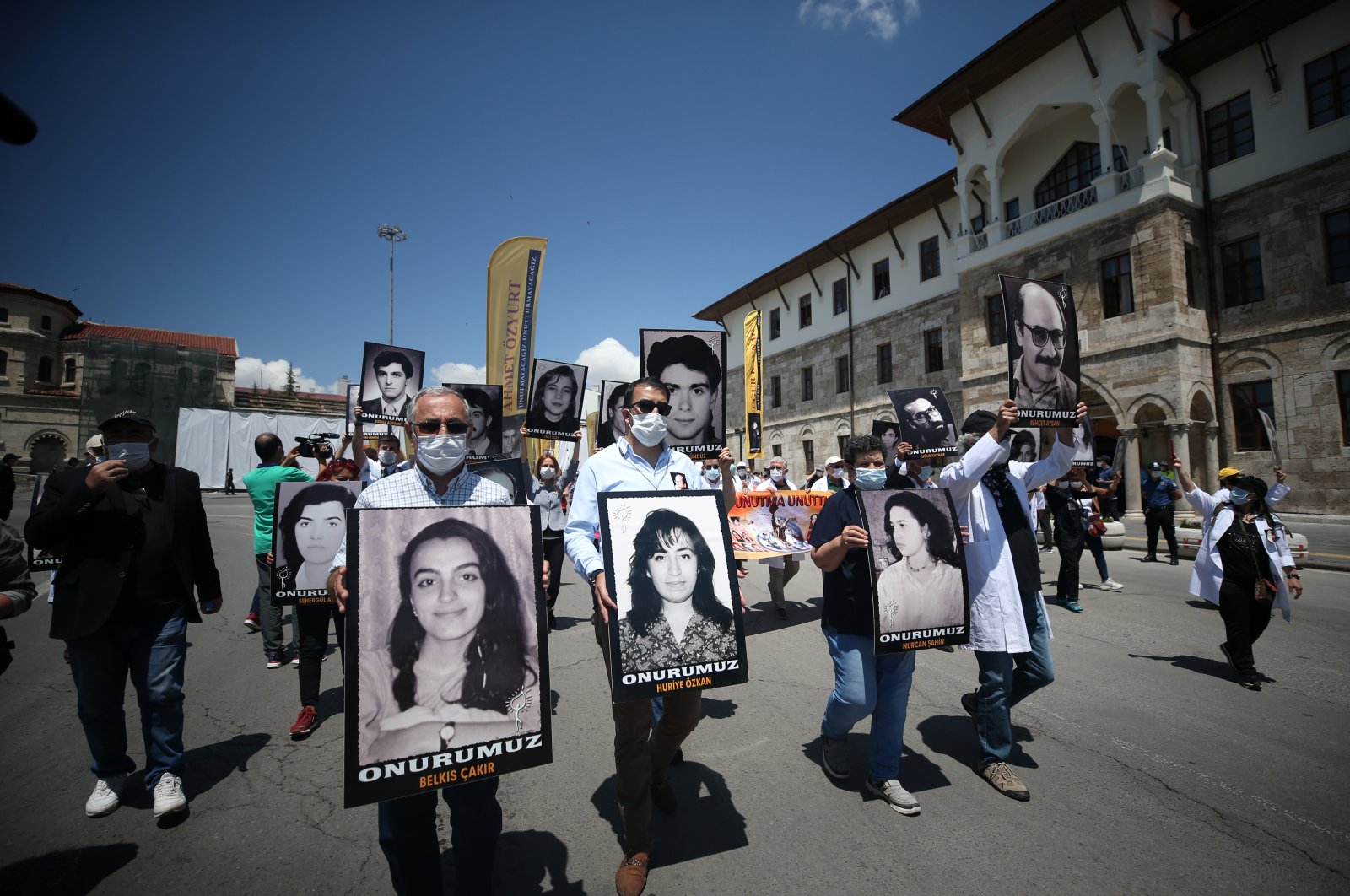 A dark chapter in Turkish history was remembered Thursday in a muted ceremony amid pandemic measures.

Wearing protective masks against the coronavirus, a small group of people walked to Madımak Hotel in the central Turkish city of Sivas to remember victims of an arson attack to the hotel in 1993 that killed 37 people.

The incident, known as the Sivas massacre, was one of many cases like it that plagued the 1990s, a decade when a "deep state" was at work.

An angry mob had gathered around the hotel on July 2, 1993, to protest what they called anti-Muslim sentiment of its tenants and guests who arrived from all around Turkey to attend a festival dedicated to a revered Alevi poet. The mob, portrayed as local Sunnis in the media, soon started a fire that trapped guests, mostly Alevi intellectuals and artists. Before security forces stepped in hours laters, many died of smoke inhalation. Dozens were arrested after the incident and 33 convicted. Critics of the Sivas trial long-claimed the real perpetrators behind the incident were not brought to justice.

The "perpetrators" the critics refer to are notorious members of the "deep state" that is accused of pitting the Sunni community against Alevis and vice versa.

The "deep state" is a network referred to by media outlets as a shadowy community of bureaucrats, soldiers, mobsters, police officers and other figures and as its name implies, it was never fully revealed. It was reportedly the culprit in a string of murders of journalists and civilians in the 1990s.

In July 2014, the State Auditing Board issued a report that found grave negligence by the authorities in the handling of the incident. According to the report, officials failed to take adequate safety precautions to prevent the attack, which could have been clearly anticipated.

Dignitaries in the small group, including Sivas Governor Salih Ayhan and members of the Alevi community, laid flowers at a memorial corner at the hotel-turned culture center. The governor called the media to abstain from using "massacre" while describing the incident, saying it implied that the entire city of Sivas was responsible for the deaths.

Erdoğan Döner, chairman of Cem Foundation, a leading organization of the Alevi community, said Turkey witnessed very tragic incidents on July 2 and July 5, 1993, and they were black spots for Turkey and humanity.

He was referring to the Başbağlar massacre where 33 people were shot execution-style by a group of PKK terrorists who stormed the eponymous village in the city of Erzincan on July 5, 1993, three days after the incident in Sivas province.

Residents of the Sunni-majority village would later testify that the assailants told them at the time that it was in retaliation for the Sivas massacre.

"Perpetrators behind those massacres are the same. We know this very well. We're here to sow the seeds of love instead of seeds of hatred and violence," Döner said.