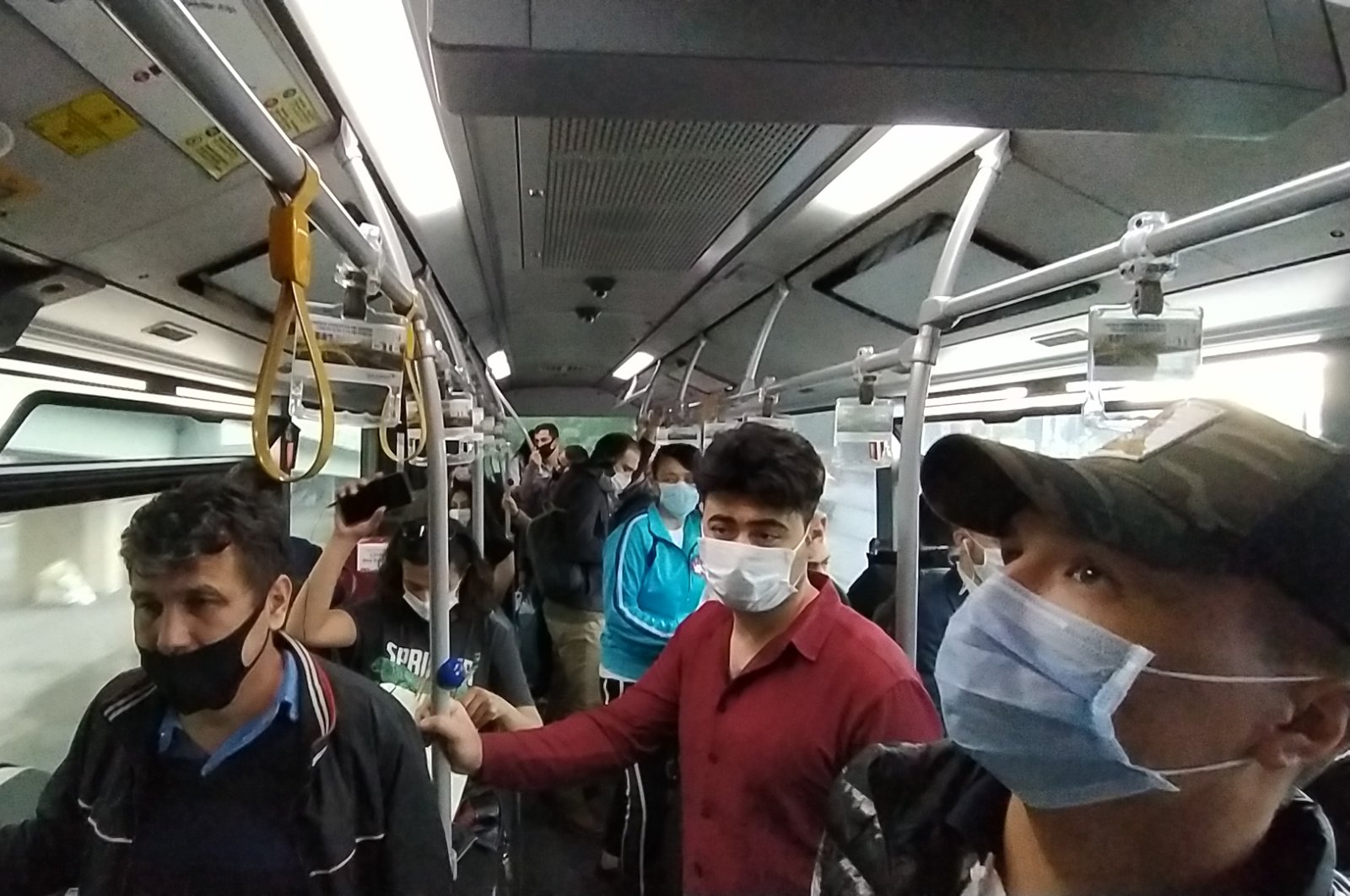 As Turkey rolls back major restrictions related to COVID-19, hopes to end the pandemic cling to maintaining social distancing, a challenge as commuters amass on mass transit

With the COVID-19 pandemic receded, Turkey’s largest cities on Monday welcomed the lifting of all sorts of restrictions, from inter-city travel to the resumption of flights and reopening of businesses. Across the country, the streets bustled with life and mass transit returned to its typically crowded state. Although the majority of the public is continuing to don face masks, social distancing is still a hurdle, with many finding getting used to the “new normal” to be no mean feat.

The situation is particularly dire in Istanbul, the country’s main financial hub and most populated city. Throngs of commuters filled buses, metrobuses and minibusses at rush hour. Though mass transit is still required to admit only a certain number of passengers not exceeding space allowing social distancing, buses were as filled to the brim on Monday and Tuesday as they were in pre-pandemic times.

According to experts, the wearing of masks and adherence to social distancing rules requiring a distance of at least 1.5 meters (4.9 feet) be kept at all times, are key factors in lowering the chances of infection. Yet, commuting at a distance is virtually impossible for those living in large metropolises. Another challenge awaiting commuters is the lack of air conditioning on buses due to the shutdown of AC units. Commuters are now faced with having to rely on open windows to circulate fresh air from outside, despite rising temperatures.

On the second day of reopening of businesses and lifting of restrictions, ferries and trams operating in Istanbul were still relatively less crowded, yet the city's metrobus service – which operates along an exclusive bus lane and is the backbone of mass transit in the city – was as packed as ever. Commuters here largely ignored social distancing for the sake of getting to work in time. Vehicle traffic was also dense, especially in the rush hours on Monday and Tuesday.

Experts warn a more challenging working life awaits many but if the public heeds the measures put in place, infections can be avoided. “If companies don’t have the necessary space or big enough offices, requesting every employee to return to the office at the same time wouldn’t be the right policy. It would endanger everybody in the workspace,” said Selma Karabey, a professor of public health.

Speaking to Anadolu Agency (AA), Karabey said companies ought to employ a slow but steady approach as they return to normal, ideally opting for rotating shifts as well as allowing employees to work from home. Office spaces are a major cause of concern not only to health experts but workers themselves, as many offices are located in high rise buildings where ventilation relies on air conditioning (AC) rather than open windows. Regarding adaptation to the new normal, the professor commented that it was perfectly understandable that the public had grown weary of the constant precautions but warned that citizens had no choice but to face the new reality.

“It is very dangerous to live as if nothing happened and try to return to what life was like before the outbreak, beginning June 1. This process will take time,” she said.

Elsewhere, in the capitals of hard-hit Italy, Spain, France and Britain, standing cheek-to-jowl with fellow commuters was as much a part of the morning routine in pre-coronavirus times as a steaming shot of espresso or a crispy croissant. That’s going to have to change as authorities try to address economic considerations without losing any hard-won gains that social distancing strategies achieved in controlling the spread of the virus.

Solutions include putting red stickers on the floor to tell bus travelers in Milan how far apart to stand. Meanwhile, the Dutch are putting out longer, roomier trains and many cities, including Berlin, are opening up more lanes to cyclists. In Britain, bus passengers have been asked to enter via the middle or rear doors to reduce the virus risks for drivers. The capacity of Milan’s metro system will be slashed to just 350,000 passengers a day, compared with 1.3 million on normal workdays. Similarly, the region’s commuter train service will be able to guarantee only 300,000 round-trip journeys, down over 60% from its earlier capacity. In the U.S., New York Governor Andrew Cuomo said he expected some 400,000 New Yorkers to be able to return to their workplaces starting June 8, and said the Metropolitan Transportation Authority (MTA) was working on a plan to make the city's mass transit system safe for commuters.

"I understand why people would be anxious about taking public transit," Cuomo said. "The public transit system will be safe,” the governor added without detailing what measures were taken to ensure the safety of commuters.

Turkey’s COVID-19 death toll rose by 23 on Monday as 827 new cases were confirmed in the past 24 hours, Health Minister Fahrettin Koca announced.

Koca urged citizens to continue to practice proper hand hygiene, wear masks and maintain social distance. "Better measures, better results," he wrote.
On Monday, a new life began for millions, especially for people in big cities who were subject to restrictions hampering daily life, as authorities lifted more measures. This "new normal," as President Recep Tayyip Erdoğan described, will determine the course of the pandemic that killed more than 4,500 people in the country. Flights and intercity travel resumed, while restaurants, cafes, gyms, parks, beaches, museums, daycare centers and libraries were allowed to open their doors after a nearly two-month closure.