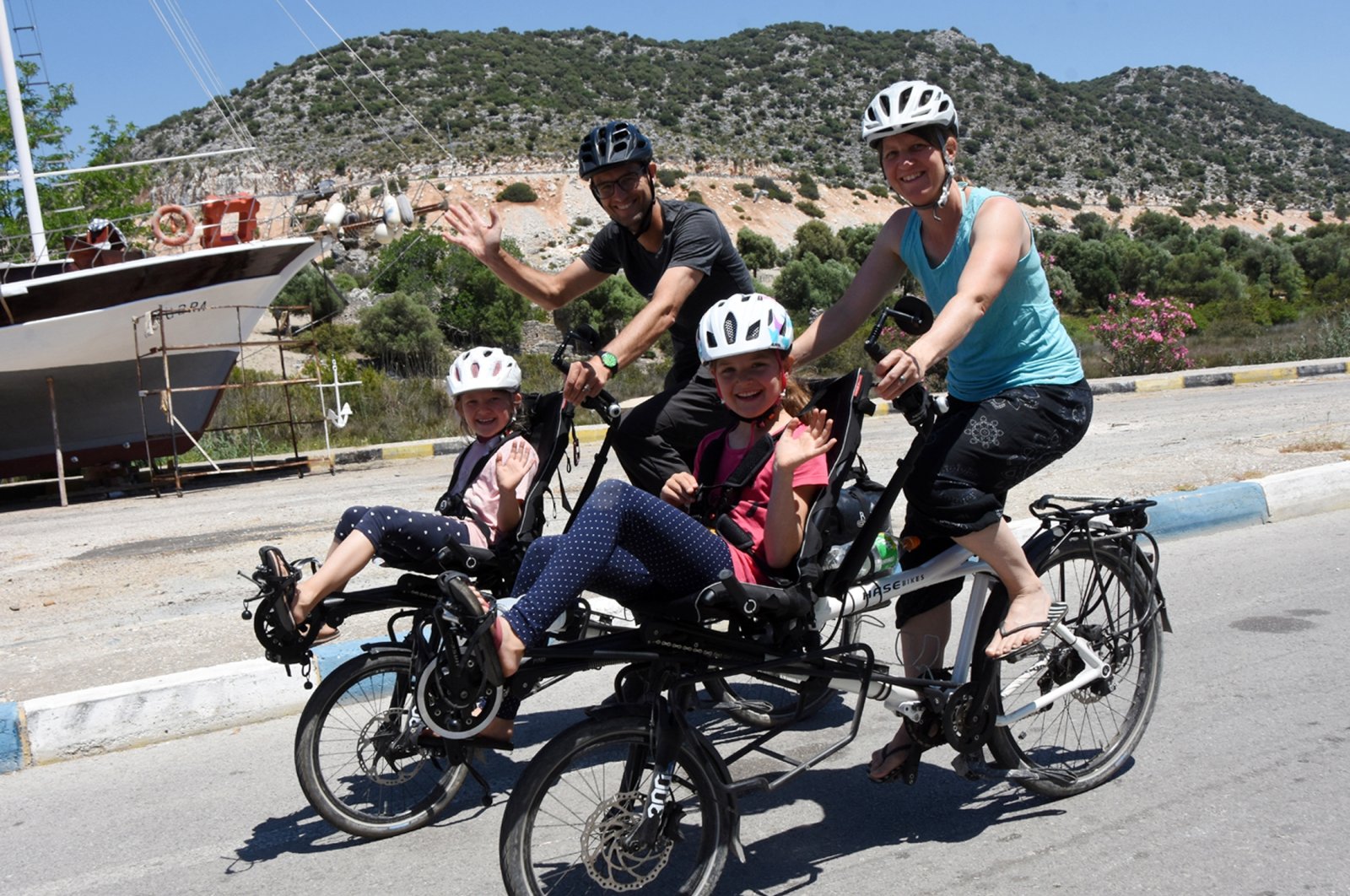 A Swiss family of four has been traveling around Turkey on two bicycles. The family has pedaled 700 kilometers (434 miles) through four western Turkish cities so far and plans to travel 3,000 kilometers (1864 miles) in the upcoming three months. The adventurous family said they were amazed by the hospitality of the Turkish people.

Swiss architect Martin Burger, who traveled from Switzerland to China on bicycle with his physiotherapist wife Sbiylle Burger in 2010, this time included his seven and nine-year-old daughters Aline and Noemi in the itinerary.

The Burger family, who traveled to Turkey by plane on April 16, has traveled 30-85 kilometers a day on two custom bicycles.

Speaking to Demirören News Agency (DHA), Martin Burger touched on their previous visit to Turkey and what made them decide to embark on a three-month tour of the country.

"On our bicycle trip from Switzerland to China in 2010, we passed 13 cities of Turkey and went to Iran. Turkey and Turkish people had a great influence on us during that trip. That's why we decided to travel around Turkey by bicycle with our children during the pandemic period," he said.

The family takes breaks along the journey and sets up camp. During this time, the family likes to go on nature walks and swim but Martin and Sbiylle Burger make sure to help their children with their school work

"We have covered 700 kilometers so far. We will travel 3,000 kilometers by staying in Turkey for three months. In some places, we do camps for two to three days. We study our children's lessons in these camps. We go into the sea and take nature walks. We travel 30-85 kilometers a day. We are traveling with two custom made bicycles," said Martin.

The Burger family set out on the tour with the intention of seeing the beauties Turkey has to offer and to get to know the Turkish culture and people.

"Our children admired the hospitality and friendliness of the Turkish people. I say this very sincerely, no Swiss will offer a cup of tea to a foreigner. But here people give us vegetables and fruits. The most wonderful people in the world are Turkish people."

"My sister and I both loved Turkey very much. Turkey is a very beautiful country. We want to come with our family again. But there is something very bad in Turkey. People throw their garbage randomly to the street, the road, to the nature. Why do people pollute this beautiful country? They should not do this," she said.