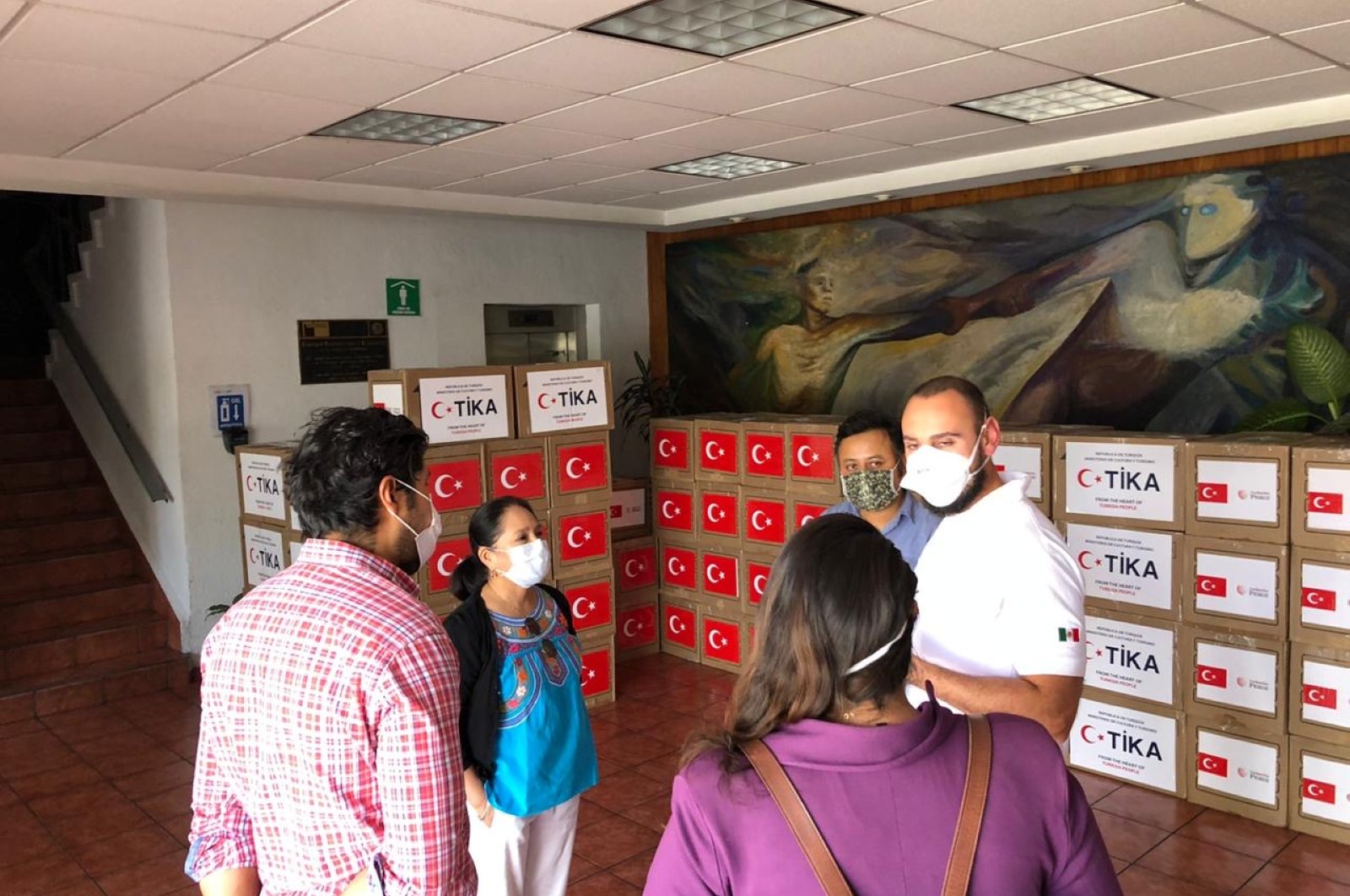 Ankara continues its uphill battle against the COVID-19 outbreak both inside and outside the country. It has so far responded to the requests of almost 60 countries by sending medical supplies and equipment. Turkey's state-run agencies also geared up efforts to help needy people around the world who are affected most by the virus.

As part of its efforts against COVID-19, the Turkish Cooperation and Coordination Agency (TIKA) on Thursday delivered hygiene and food packages to the needy people in Mexico.

In a written statement, TIKA said it handed over 170 packages to a Mexico City-based institution for the country's indigenous people. The packages will be distributed to the needy in Chiapas and Oaxaca states.

About 850 people will benefit from the packages that include N95 masks, disinfectants, basic food and cleaning materials.

The coronavirus death toll in Mexico stands at 1,732 with 163 new diagnoses in the last 24 hours, while the total number of infections in the country has neared 18,000.

Another medical equipment delivery TIKA was carried out at a ceremony at Uzbekistan's National Center for Innovative Medicine. The program was attended by included TIKA's Tashkent Program Coordinator Cemalettin Tüney and Turkey's Ambassador in Tashkent, Mehmet Süreyya Er. They emphasized the importance of collaboration in these difficult times.

Er said health institutions of both countries continue to share information and experience via teleconference to fight the virus.

The Center's head, Ravshan Izamov, conveyed his gratitude to the Turkish government and people for the supplies.

Since then, the agency has sent millions of masks to dozens of countries along with humanitarian aid to regions suffering the economic consequences of the outbreak. The agency has reached about 400,000 people so far during the pandemic.

The agency did not forget the internally displaced people (IDP) in Ethiopia as well. Providing them with food supplies.

Mehmet Ali Yetiş, the Ethiopia representative of TIKA, said the donation will help them during the Islamic holy month of Ramadan and through the COVID-19 pandemic.

Turkish Ambassador to Ethiopia Yaprak Alp was also present at the distribution ceremony held at Gelan IDP Center, on the outskirts of capital Addis Ababa.

Abdella Siraj, a father of five and one of the aid recipients, said: "This donation will keep us happy throughout the month of Ramadan."

According to Abdella, the government rations 15 kilograms of rice and 1 liter of oil every month to each member of a family, but that is not enough.

"I am a good mason. I know carpentry as well," he said, calling on the government to find a way of engaging the able-bodied IDP population in productive activities.

"We would be happier if we could earn a living," he said.

Isteriya Ahmed has been living at the center for the past three years. "The food we have been receiving from authorities is so scanty that I am forced to engage in the selling of Qat (a mild stimulant plant)," – a business which she described as unstable and not always profitable.

"I have to do it for my two children and my elderly mother," she said.

TIKA has been active in Ethiopia doing both development and relief activities.

"That would help the country attract more foreign tourists," he said, adding his agency had also renovated a 1912 Turkish Consulate in the eastern city of Harar.

Since its founding in 1992, the TIKA has been responsible for facilitating Turkey's official development assistance by providing aid to developing countries. Operating in 50 countries, the agency has helped as many as 140 countries worldwide.

The Turkish Red Crescent delivered Thursday 100 food packages to an Istanbul church as part of measures to combat the novel coronavirus.

Red Crescent board member, Ercan Tan, said the packages contain hygiene products as well as food noting that the aid group will continue operations around the world.

Stelyo Gülgün, the head of Altimermer Greek Orthodox Church Foundation thanked the Red Crescent for the supplies and said, "We have always seen your support.”

Senior Pastor Yorgo Kasapoğlu said the church has collaborated with the Red Crescent for the last five years. The supplies will be sent to those older than 65, who are unable to leave homes because of a coronavirus curfew.